Triptych art is made up of three pieces or panels. Often used to impart narrative, create a sequence, or show different elements of the same subject matter, since its conception, the triptych has continued to add a new dimension to visual art. The triptych is also used to split a single piece of art into three, or to combine three pieces into one.

The power of triptych art lies in its ability to work as a coherent piece, as well as three separate works of art. One reason the triptych is generally more popular than, say a diptych (formed of two parts) or a quadriptych (formed of four parts) is the power of the number three. From its religious symbolism, to its ability to aptly contain the beginning, middle and end of a plot, three pieces can work to accommodate a number of motifs, from balance and pattern to story and meaning. 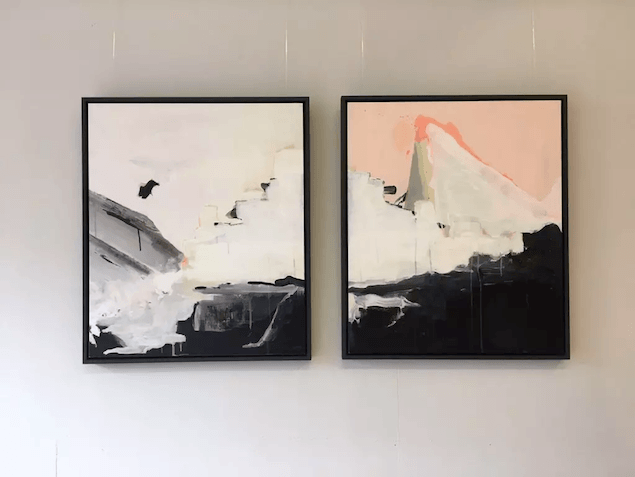 The Origin of Triptych Art

The term triptych comes from the Greek word ‘triptykhos’, which translates to mean ‘three-layered’. The idea of three pieces creating layers and adding depth to a single artwork is central to some of the most famous and enduring triptychs throughout the history of art.

The triptych first made its appearance in the Middle Ages, adorning the altarpieces of churches. Relaying stories of the bible and functioning to aid prayer, triptychs were an important way of visualising Christianity and showing devotion.

Common subjects in 14th and 15th century, triptychs were images of the Madonna and child, the birth of Jesus and the crucifixion. Often finished with a grand and stately frame, many triptychs still exist as the focal point of the altarpiece. 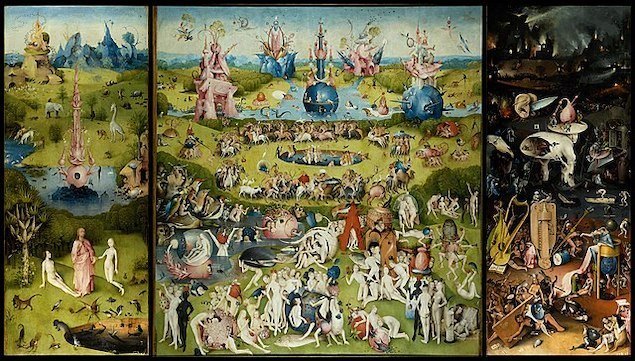 The Garden of Earthly Delights, 1490-1510, by Hieronymus Bosch (Wikipedia Commons)

The Evolution of the Triptych

Examples of famous triptychs range from Hieronymus Bosch’s The Garden of Earthly Delights (1490-1510), to Frederick McCubbin’s The Pioneer (1904), to Francis Bacon’s Triptych August 1972. Bacon is commonly associated with the resurgence of the triptych in modern art. From the 1940’s to the late 80’s, Francis Bacon is thought to have painted 28 triptychs, all ranging in scales and subjects.

Bacon saw triptychs as a means of manifesting the series of images that existed in his mind. He notably remarked, "I suppose I could go long beyond the triptych and do five or six together, but I find the triptych is a more balanced unit." For Bacon, triptychs were a series, as one work alone would not accurately demonstrate his ideas.

The influence of the triptych has spanned into contemporary art, prevailing in everything from painting, to sculpture to photography. Many Rise Art artists have continued in this tradition, creating triptychs as a series or as a split image.

British photographer Tommy Clarke has made a name for himself with his zoomed out aerial photographs of people, nature, and the interaction between the two. Travelling the world, Tommy’s photographs are instantly recognisable through the fluorescent turquoise of the sea, or the aesthetic arrangement of sun loungers from afar.

While Castaways Triptych is clearly split into three different panels and displayed with space in between each one, mixed media artist, Roseline Al Oumami does things slightly differently. In her piece, ”Voyage” Triptych, Roseline joins all three canvases. Her piece in a continuation of brushstrokes, colour splashes and dynamic marks. The painting sprawls across the wall, and the canvases are arranged close together, which adds to the movement of the overall piece. Roseline’s art is all about energy, emotion and atmosphere, and ”Voyage” Triptych is no exception. It is a painting fuelled by vigour and vibrance and its composition across three canvases functions to add new sense of depth to the piece. 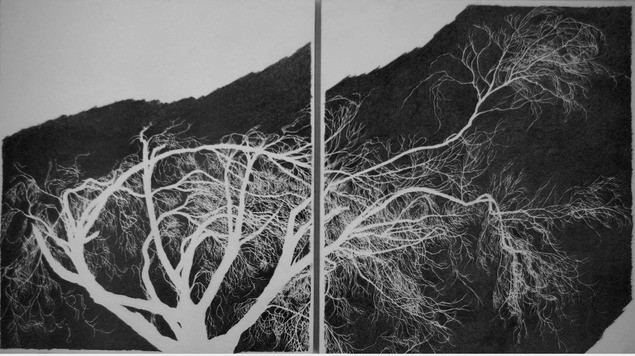 The Space Between Us, 2013, by Kirsty O'Leary-Leeson

Kirsty O’Leary-Leeson frequently extends her drawings from one panel onto the next. In a similar way to Roseline Al Oumami, Kirsty’s piece, The Space Between Us, creates a gust of movement as the form seeps across two panels. However, in Melancholy Strings (Triptych), Kirsty uses a different format, as her piece follows a vertical arrangement. What’s more, the piece is a series, in which the same subject is repeated, only in a different focus. With her photorealistic style, Kirsty imitates the exposure and effect of black and white photography to create a piece that is simultaneously one image and three separate images.