Last week, when Bob Dylan opened his solo exhibition 'The Asia Series' at the blue-chip Gagosian Gallery in New York, many people we taking by suprise. "Since when does America's most iconic and succesful singer-songwriter also paint?!" was a common question in many people's minds. Well, the truth is he's been painting since the 60's and belongs to an expanding group of rock 'n' roll musicians that also pick up the brushes on a regular basis AND show and sell their works all over the world. Do you want to know the most famous ones?

As we were saying, Dylan opened his exhibiton 'The Asia Series' last week. Never the one to fall for false modesty, Dylan chose to make his New York debut chez Gagosian -possibly the biggest and most reputed commercial gallery in the international art scene- which indeed guaranted maximum media impact and sales. The works, described in the press release as "a visual reflection on Dylan's travels in Japan, China, Vietnam, and Korea that comprises people, street scenes, architecture, and landscapes" are indeed exotic and well executed, if not exactly groundbreaking. Moreover, the legendary musician has met criticisms, acussing him of plagiarism. Nobody said it was easy to be a Renaissance man...

Before the Beatles got über-famous, Sir Paul's fellow band members John Lennon and Stuart Sutcliffe were typical art school kids, even if John finally chose to pursue his music career instead and Stuart, a fairly good and commited painter, sadly died before even turning 22. The lack of formal training made Paul hold back his painterly desires until he was 40, when a providential conversation with William de Kooning finally gave him the push he needed to start making work. In 2000 Arnolfini gallery in Bristol held his first solo show in the UK. 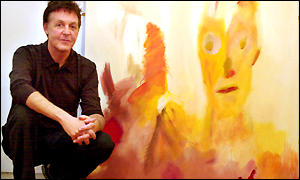 Paul McCartney in the front one his paintings in 2001 McCartney's portrait of his late wife Linda, painted in 1988

Bowie started painting when he moved to a chalet in Lake Geneva (out of boredom?) in 1976, just before moving to Berlin to start one his most fascinating musical periods. He has been practicing since then, also taking up printing and sculpture. That is all very good, but we think that his best artworks have always been in the field of perfomance. Think Ziggy Stardust or the Thin White Duke periods. 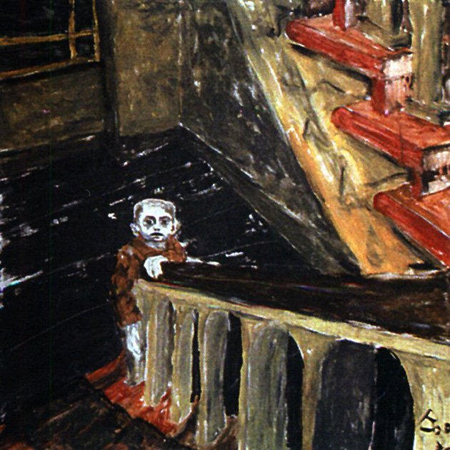 This is painting of Bowie. It looks pretty scary to us...

The former frontman of New York's new-wave darlings Talking Head is also a visual artist, although instead of painting (apparently the favourite medium for fellow musicians) he favours a rather more conceptual form of art, which a penchant for public art installations. in 2009 Londonders could see one his latest big installations 'Playing the Building', in which he transformed Camden's Roundhouse into a music-making device that coud be activated (or "played" by visitors). Making music with a building? That's pretty cool, we think. 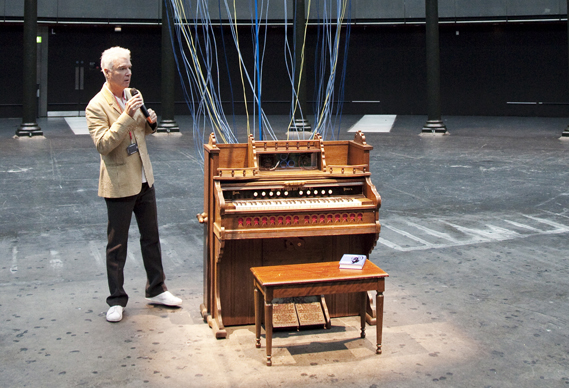 David Byrne presenting his installation 'Playing with the Building', London (2009)

The bass-player and singer from Sonic Youth trained in the visual arts before being drawn into New York’s art rock scene in the ’80s. She even did some art criticism, publishing some reviews in Artforum and other important magazines. In 1982 she curated an exhibition at White Columns gallery  in which Mike Kelley and Tony Oursler were among the participants. Dan Graham  invited her to join in a performance of an all-female rock band, which marked the start of her first band CKM. In 2003 Rise Art curator Kenny Schachter hosted a collaborative show between Kim and Jutta Koetter in his NY gallery and and in 2005 she took part in the exhibition Her Noise in the South London Gallery. She continues to paint and make conceptual art, watercolour being her favourite medium.

One of Kim Gordon's recent watecolours 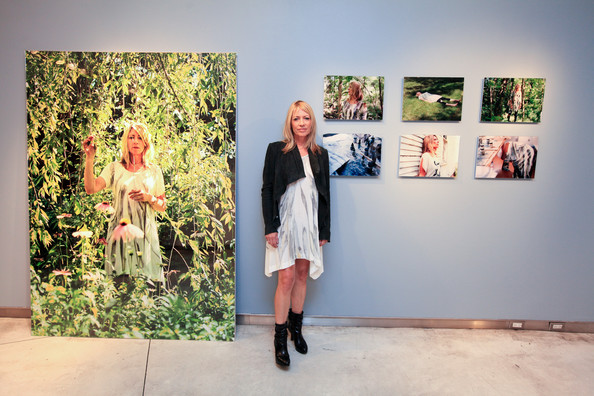 Although perhaphs more famous for his musical adventures, Childish started his career as a painter and poet. He studied at Central Saint Martin's School of Art during 1981, where he became friends with the painter Peter Doig before being expelled. Shortly after he met Tracey Emin, then a fashion student. They were a couple until 1985 and she has always acknowledged Childish as a major influence in her decision to become a visual artist. In 1999 Childish founded Stuckism, an art movement that promotes figurative painting, as opposed to conceptual art. His last major show was a solo exhibition last year at the ICA, London. A recent image of Billy Childish in his studio, full of his paitings ... and during the happy days of his relationship with Tracey Emin, in the 80s

Bob Dylan's 'The Asia Series' continues at Gagosian Gallery, New York, until the 22nd of October 2011.

What do you think of all this art made by musicians? Comment below and join the conversation!