We invited the curator and publisher Justin Hammond to select his five favourite works of art from all over the site. And we are really interested in his views since he is, along other projects and ventures, the curator of the prestigious Catlin Art Prize, which promotes and supports the best art graduates each year to help start and sustain their art careers. So let's see what he picked:

I've picked out five works from the Rise Art website and my first two choices are by the same artist - Stuart McCaffer.His output is incredibly diverse, but always clever and funny, and 'The Older You Get The Less You Look Up' (great title, that) took me by surprise at last Summer's RCA degree show. I almost missed it: Upon entering a pitch black room, a low-hanging light flickered on to reveal a seemingly empty space, but by following the light source (now recognisable as a buckled street lamp) and looking up, the full installation became apparent - an upside down street. Cracked paving stones, man-hole covers and cigarette butts a few feet above head height.

The weight from above was palpable - I liked it and contacted Stuart to find out more but the stuff he sent back was a million miles away from what I'd just seen. Maybe he was taking the piss? Home-made postcards of fluffy cats and cute dogs, pretty much the opposite end of the scale. It transpired that the postcards were the starting point for a set of smallish paintings like 'Self Help No. 2'. The process offered a structure, a new routine: Stuart would construct a photo montage postcard (complete with 'self help' slogan) and post it to himself. Once delivered, he'd start the painting - and perhaps take heed of the card's message. 'Self Help No. 2' by Stuart McCaffer

Andy Wicks' paintings have already enjoyed a lot of love on the site, but 'Bill' absolutely stands out for me. The beauty is in its simplicity - it just really works. I'm a bit of a sucker for an oval portrait anyway, but when the old master thing is done badly it can be such a cliche. 'Bill' is good enough to transcend that. 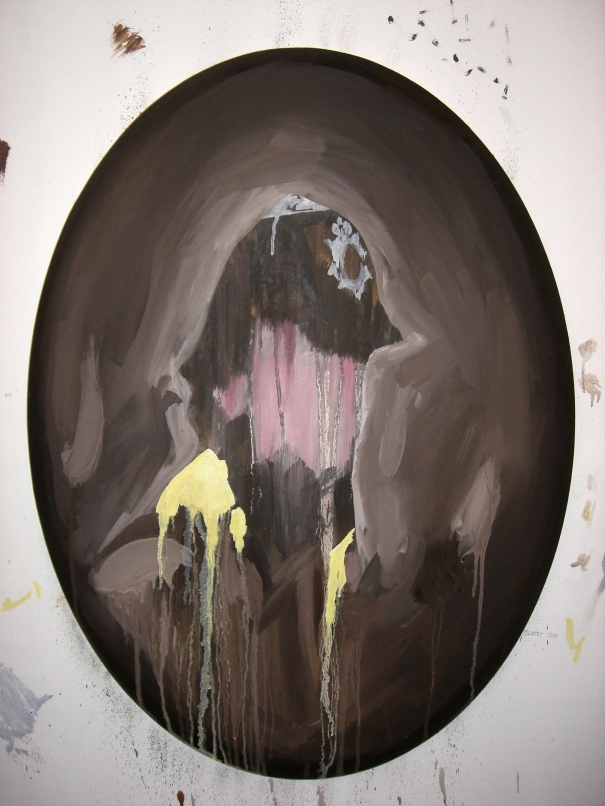 Edd Pearman's 'Allotment' has a real painterly feel that adds to the melancholic nature of the subject. I think this is a strong piece - more affecting than some his previous 'uniform' works and hinting at even more accomplished things to come from the artist. Edd has started experimenting with three-dimensional work cast from resin and I recently came across a piece called 'The Heart is a Lonely Hunter' that manages to intensify the powerful sense of vulnerability found in 'Allotment'. Including Juliette Losq's work feels like a bit of a cheat as I've recently exhibited two pieces myself, but having now spent a lot of time with 'Myriorama', it's fair to say that digital reproductions don't really do it any justice. This particular piece is a take on the 19th Century myriorama - a set of illustrated cards designed to be arranged and rearranged in any sequence to form different panoramic landscapes. Juliette's 'Myriorama' is a large-scale ink painting in three separate sections, each hung from wooden battens like a scroll. The detail is incredible and even after the third or fourth viewing, previously hidden figures, skulls and silhouettes slowly emerge from the shadowy foliage.