Barry Johnson is an American interdisciplinary artist, TEDx Speaker and Associate Editor of City Arts Magazine. He mixes a variety of unconventional mediums including paint, collage, installation and film to create visual narratives, particularly centred on the Black experience, community and culture.

While he has no classical artistic training to speak of, Barry’s remarkable dedication to self-practice and unrelenting passion to create enabled him to develop an astounding artistic ability all on his own. He studied Business Marketing at Emporia State University where he shrewdly cherry-picked all the know-how required to kickstart a career in the arts. In the meantime, he would wake well before dawn to hone his craft. At the age of 30, Barry quit his day job to fully focus on his art.

Barry does not plan many of his series or projects; most of his pieces are drawn from real-life situations and encounters. That said, he does take inspiration from artists such as Robert Rauschenberg, Augusta Savage, Gordon Parks, Matisse, and Marina Abramovich. Many of his works pair paint with various other materials such as fabric, chain, metal, glass or other, some of which he’ll often collect from local-thrift stores. He’ll then reconstruct his findings into a collage, installation or mixed-media painting.

Many of his exhibitions have raised awareness about issues surrounding Black identity and representation. For Reaching Down, Rising Up (2019), Barry exhibited an intensely symbolic mixed-media series. The faces of his subjects have been covered up by layering material or smudging paint to represent how Black history and the Black experience have been silenced and dismissed, such as in Untitled 164 using acrylic on canvas.

His work has also been featured at international galleries such as Columbia, Vancouver, Palazzo Ca’ Zanardi, as well as at the Venice Experimental Video and Performance Art Festival.

You can learn more about how Barry harnesses the power of storytelling through his work in our article The Art Of Creating New Personas.

barry johnson is featured in 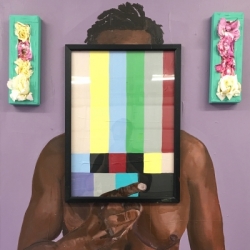