Indian artist Zil Hoque lives and works in London, but his greatest influence is Spain. His skilful oil paintings show a mastery of light, depicted in tonal colours drawn straight from the Andalucian landscape. Subjects are caught in motion. Displaying movement in one of Hoque's hallmarks. He also allows the texture of the paint to reveal the image. Light against dark creates a sense of drama.…Show more He has said "it is never enough to see colour sitting on the canvas in a passive way, it has to move, illuminate and intrude our physical space."

International private and corporate collections including the Bank of England and the Ministry of Defence, Uk.Show less

"Zil Hoque's expressive use of oil paint and command of light is striking. The viewer immediately feels the intensity and movement of his subjects. He's a truly arresting artist."

Stay in Touch with Zil!

"Follow Zil to receive first access to new works for sale and the latest updates on events and activities."

Zil Hoque is featured in 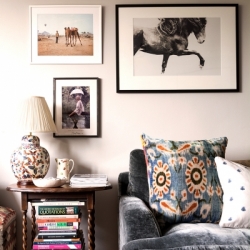