Legacy and exchange of ideas feature in Marianne Nix's work. The beauty of nature that we find both near and far and the changes happening to it over time. Combining photography, digital tools, traditional printmaking and oil paint glazes and impasto, Nix mixes it up in her paintings and prints…Show more which are built up in layers by adding and removing.

Nix studied fashion design, and digital media at MA level and worked as a Documentary film director. She was brought up in the UK and Netherlands and spent three years in Japan and has travelled widely. Focussing entirely on her art since 2003 she is now working from her London studio producing layered and multimedia works that have sold internationally.

Selected for exhibition in the Mall Galleries (2012), Bankside Gallery (2015), the Royal Academy Summer Exhibition (2012,2013), The Royal Society of Painter-Printmakers (2016) and the V&A print collection, London. Exhibiting annually with i-contemporary gallery and Curated by Amar Gallery at Affordable Art Fairs.Show less

"Marianne's sensitivity for, and connection with different landscapes shines through her evocative paintings and etchings. Her works are in the great tradition of British landscape artists, and she is proficient in several mediums. I particularly like the extra dimension of incorporating the signatures of associated notables into the ripples of a Hampstead pond."

You are welcome to follow me in order to get up to the minute notifications of new work uploaded to Rise Art.

Marianne Nix is featured in 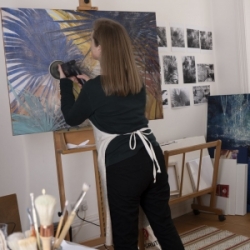 Marianne Nix: The Exploration of Legacy and Ideas