Ben Allen is a contemporary artist, known for his distinctive Pop paintings. Using complex collage techniques, his pieces create a dynamic mash-up of popular culture, which work to critique the banal and the mundane, challenge mainstream media values and inspire a sense of freedom.
With designs gracing the walls of big names like Jade Jagger, Stephen Dorff, Sophie Ellis Bexter, Horace Panter (The Specials) and Richard Branson, art displays in Selfridges and a 40ft artwork dominating the…Show more Notting Hill headquarters of Virgin.
Clients include Vans, Converse, Amy Winehouse Foundation, Levis, Virgin, Jamie Oliver, Channel 5 and Nokia.
His work is in private collections throughout the UK, in Australia, New York, Las Vegas, Barcelona, Korea, Germany, Japan, Hong Kong, Ibiza and has been featured in Huck, Design Week, The Observer, The Times, Elle Déco, Plus1, Time Out, Loaded and GQ magazines to name but a few.Show less

Follow BEN ALLEN to receive first access to new works for sale and the latest updates on events and activities.

Ben Allen is featured in 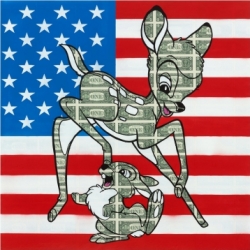