Maddie Yuille makes work that explores emotions, interactions and the relationship between the two. Taking inspiration from the news, tales from history and folklore, Maddie forms paintings that comment on the human condition. Maddie primarily works with fluid paints, namely ink and watercolour, to capture moments of sensation and embodiment. These mediums allow for splashes and drips to emerge, reflecting the 'human messiness' that sits at the core of Maddie's practise.

Maddie is new to Rise Art, and is currently exhibiting her piece, In Expectation as part of our Emergence exhibition alongside artists Iain Andrews, Trine Bork, Liorah Tchiprout and Lasse Thorst, to name a few. Book your visit to Emergence here. 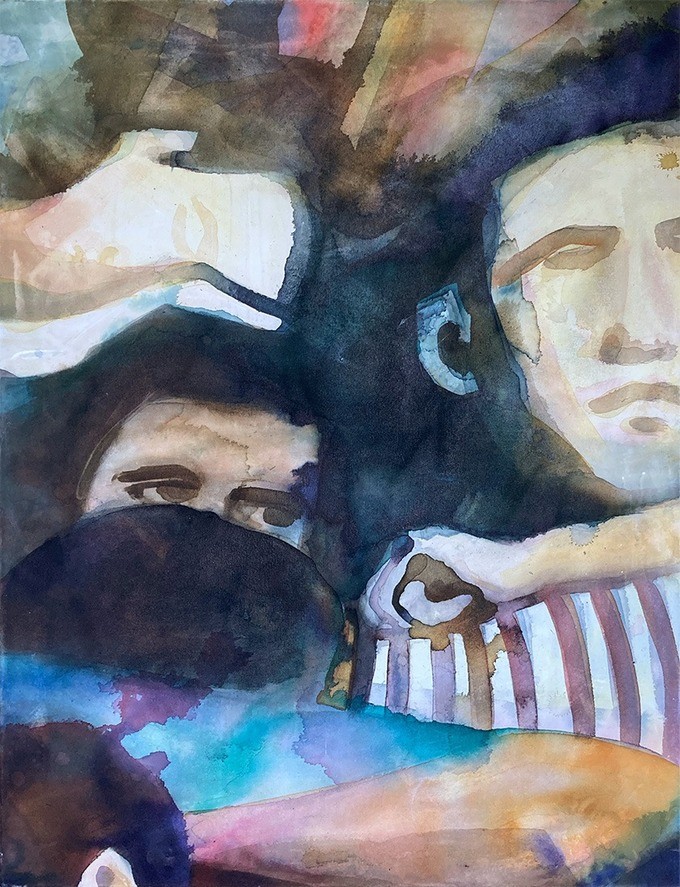 In Expectation by Maddie Yuille

I am a painter working mostly with fluid paints – recently watercolour and ink – to explore a visual representation of sensation and embodiment. I'm interested in depicting the ambiguous co-existence of bodies expressing complex emotions: of care, comfort, affection and empathy, alongside anguish, sorrow and resentment. I use fluid paint to express a certain mutability and interdependence between bodies, and I embrace a way of working that allows for mistakes to arise – splashes of water and drips of paint – that reflect a human messiness, imperfection and mutability, led by the material of the paint.

What message do you want to get across with your work?

I want my work to communicate a sense of human emotion and sensation visually. I'm not sure if that's a message, but if the viewer is moved to feel something from my paintings – perhaps a sense of empathy in the Speicher paintings – then I'll be happy.

How has your practice evolved since starting out?

It has changed a lot since starting out, both in terms of subject matter and material use. Practising my MA in Fine Art a couple of years ago was a big turning point, as it gave me a better understanding of how I can use materials to communicate in different ways. Since then I've experimented with different ways of making, and enjoy finding new techniques. I've shifted from working with acrylic paints mixed with glazing mediums and applied on top of a highly primed surface (so that the paint sits on top in clearly defined gestures), to what feels like the opposite way of working – allowing the paint to sink in to the material of the canvas, encouraging a looser approach. My subject matter has also shifted over time – I tend to work on a particular project idea for six months or more, which will then evolve into something new. Prior to the Speicher paintings, I worked on a series based on studies of still interiors, in which views to the outside world were hinted at or obscured. 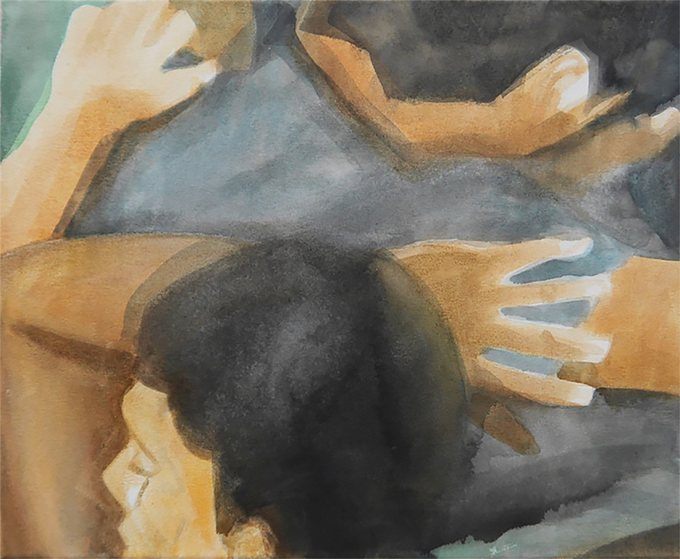 Tell us about your Speicher series

The series began from watching a BBC documentary series titled Once Upon A Time In Iraq, which explores the fallout of the US and UK invasion of Iraq. The final episode examines the rise of ISIS, and one particularly chilling event where nearly 2,000 young army cadets were abducted from Camp Speicher and executed in what was one of the deadliest terror attacks in history. I was struck by the video footage shown of the men being transported in trucks, and wanted to explore this painful imagery that seemed to recall tragedies of the past. I began by freeze-framing the video footage and making studies of the men depicted, working at first on small A5 painting studies, and then moving on to larger works on canvas. The resulting paintings are an attempt to explore human embodiment in a moment of extremity, depicting interactions filled with ambiguity which seem to express both friction and discomfort between bodies as well as elements of support and tenderness.

What's an average day like in the studio for you?

It starts with a 20 minute cycle from my house down the canal to the studio, which is a pretty good way to start the day! Once I'm in, I probably spend about 80% of my time looking at paintings and 20% actually painting. I normally work on more than one painting at once so I don't get too hung up on one of them, and so will move the paintings around as I work between them, working with them both on the floor and lent against the wall. I tend to make smaller studies on paper and canvas before moving on to larger canvas paintings. Snacks and music are both essential to the working process – my current favourites on that front are cheese toasties and Billie Eilish. I'm also lucky enough to have my studio back on to a park, so I'll normally take my lunch break zoning out in the greenery. 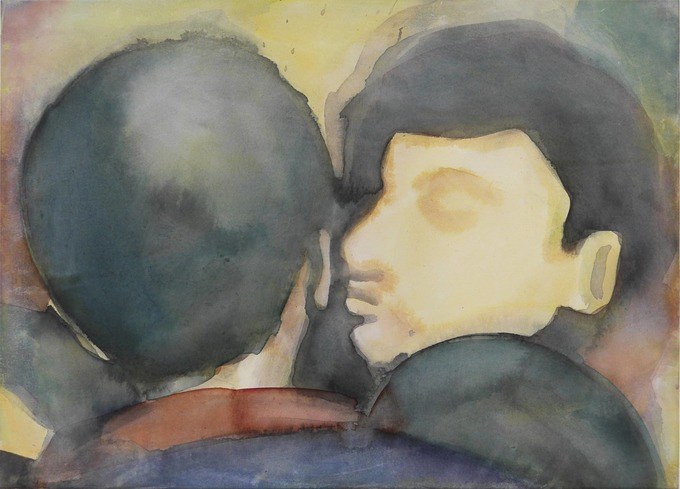 Speicher I by Maddie Yuille

What/Who are your key influences? Have these changed over the years?

I've been influenced by numerous artists over the years and these change depending on what I need / am interested in at that time. For the Speicher series I was influenced by Marlene Dumas, Maja Ruznic, Delacroix's The Raft of Medusa, Käthe Kollwitz, and Peter Paul Rubens. Literature is also really important to me when I'm exploring a new subject area; I like to read around related ideas whilst I'm developing my thinking. For instance, for the Speicher series I read Regarding the Pain of Others by Susan Sontag, The Art of Cruelty: A Reckoning by Maggie Nelson, and If I Am A Man by Primo Levi.

I think the other artists featured in the Emergence show are all amazing. I'm a big fan of Simona Orentaite, Hira Gedikoglu, Fu Liang, and Harriet Gillett just to name a few, but they're all brilliant!

I've recently started working on a new series inspired by The Book of Trespass: Crossing the Lines that Divide Us by Nick Hayes, which explores the history of land enclosures in the UK. I'm particularly interested in the story told of the Belvoir witches – a mother and her two daughters who worked as cleaners at Belvoir Castle and were accused by the Earl of Rutland of witchcraft following the unexplained death of his two sons, resulting in their execution. I've started making new paintings which explore imagery of women in nature, that for me are a kind of imagining of how these women could have lived. Tied into this are ideas around the Victorian conceptualisation of Nature as an irrational feminine force that as such has to be contained and controlled, and how prior to this women who were seen as being too close to nature – who might have had knowledge of herbs for example – were labelled witches. In the paintings I'm making I want to capture that feeling of wildness – of nature untamed – and am working on the backs of old paintings to allow the ink from previous work to seep through and create unplanned starting points.