Hiroshi Sato is a Japanese artist known for his realist paintings. His main subject is the human figure in interior environments. Hiroshi takes inspiration from artists present and past, his aim being to portray our various states of consciousness.

The artist spent much of his childhood in Tanzania, where he was exposed to a rich array of cultures, languages and ways of life. He traces his…Show more interest in human perception back to those experiences. He went on to train at the Academy of Art University in San Francisco.

"Hiroshi paints with a keen sense of colour and a beautiful brushstroke. It’s as if he’s taken elements of Cezanne, Hopper and Vermeer and personalised them to create intimate and quiet glimpses into the lives of his subjects."

Hiroshi Sato is featured in 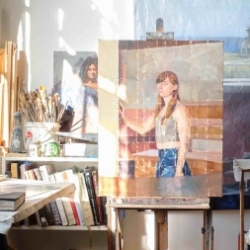