Gareth Griffiths is a Welsh sculptor based in Leeds whose work is inspired by the US West Coast architectural style known as Googie, which is characterised by flowing lines, abstract cut-outs and boomerang shapes. Gareth’s sculptures are colourful and eye-catchingly zany.

The artist studied Sculpture at Leeds University. He became a member of the Royal British Society of Sculptors in 2015.

Gareth regularly exhibits his work in the US and throughout the UK. He has also undertaken…Show more commissions for various collectors - not least of all for the dressing room of Manchester United.Show less

Stay in Touch with Gareth!

"Follow Gareth to receive first access to new works for sale and the latest updates on events and activities."

Gareth Griffiths is featured in 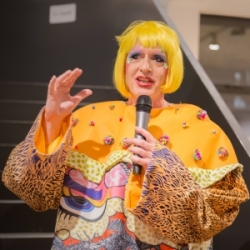