Artist and psychotherapist Iain Andrews creates work that tells a story. Whether retelling narratives that have been told to him, reframing an existing story or rethinking the non-verbal elements of fairy tales, Iain’s paintings dissect the notion of the familiar. Both abstract and figurative, expressionistic and gestural, Iain instils each of his works with a theatrical element, giving his paintings a dynamic sense of depth.

Iain Andrews is new to Rise Art, and has joined the platform since showing his work, Buen Provecho as part of our Emergence exhibition. We spoke to Iain to learn more about his practise, his approach to painting, and his wide-ranging inspirations. 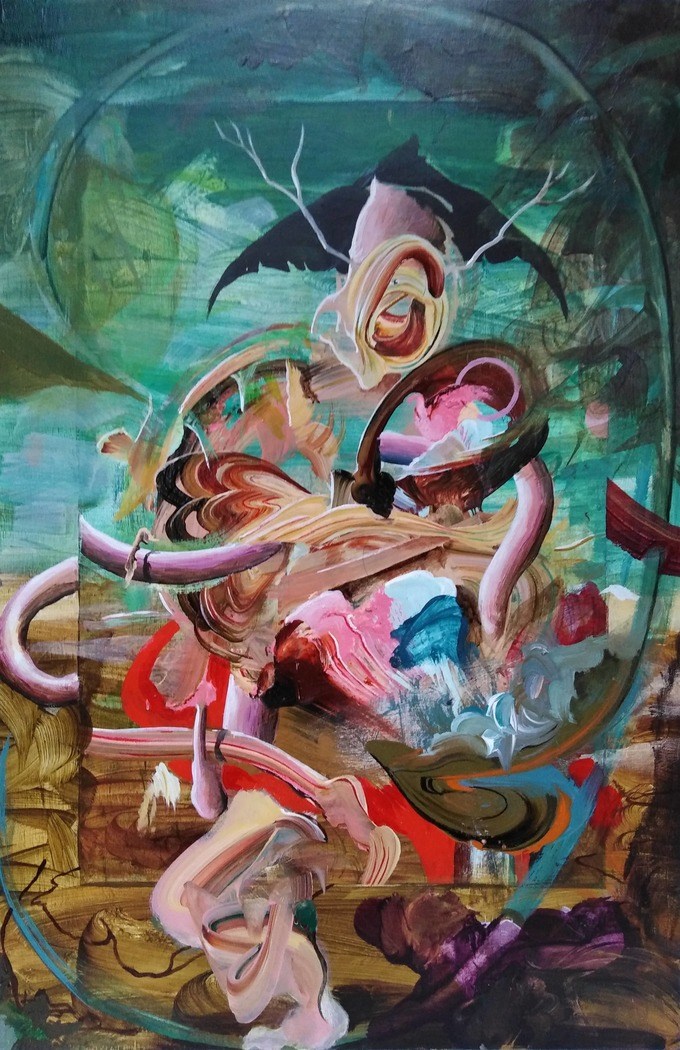 I would probably be more interested in hearing how someone else might describe my style, than in naming it myself, since there is a sense in which many of my images function like Rorschach tests, and are only complete only once the viewer has begun to glean something recognisable or familiar from the image. All painting is, in one sense abstract, since it attempts to transpose a three-dimensional world onto a two-dimensional picture surface, and the artist has to make various decisions about how to condense and describe complexity through the arrangement of coloured mixtures on a flat support. I'm interested in celebrating this process of transposition through pressing the pause button at the point at which squeezed out paint ceases to be a blob of raw sienna and instead shifts to become a recognisable image, the fold of a piece of cloth for example.

I want to make works that hover somewhere between abstraction and figuration without fully belonging to one world or the other. So, for example, I may try to 'objectify' the brushstroke itself, adding a shadow or highlight to what is otherwise 'only' a gestural, expressionistic brushstroke. The idea of the theatrical is important to me, and I'm often suspicious of the idea that something may somehow be more genuine or authentic if it is done spontaneously or instinctively, so again, I try to hover somewhere between the world of a swift, expressionistic paint application, and a more thoughtful considered approach of adding details and shadows. 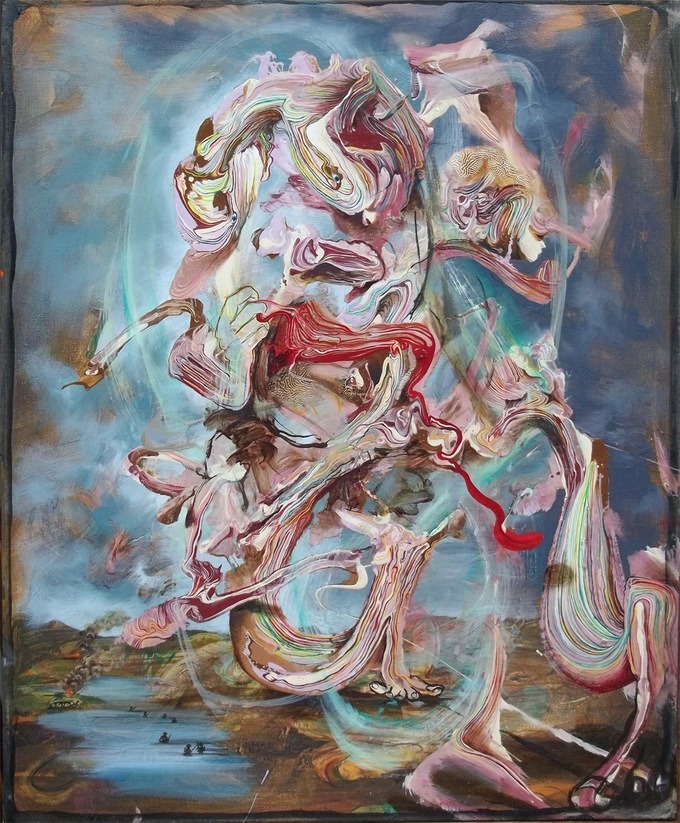 I am interested in how different people's interpretations of my work can be, but ofcourse there are reasons why I make work, beyond simply wanting to create a space for others to interpret. I also work as an art psychotherapist with teenagers who struggle with a wide range of mental health difficulties, and I often think about both my painting practice and therapy as a way of re-telling stories. Stories are told to me in therapy, not primarily with the intention of conveying information but rather as a way of processing, understanding, confessing or expelling, and hopefully, in the retelling the story becomes reframed.

In my painting, the use of a pre-existing image as the basis from which to deviate and improvise, an armature upon which to hang colour, gesture and narrative, - a similar process is taking place. The point of the 're telling' this time is not to copy or replicate the original image, but to try to remake it somehow, in such a way that it both is, and is not familiar. The painted image functions not as a means of telling a story, but as a means of trying to understand something that cannot be described using words alone. I am interested in the narratives of Fairy Tales, not because I want to discover what happens, since everyone knows the ending already, but because I enjoy the way they capture states of being that one usually associates with the non-verbal - overwhelming oral greed, neglect, abandonment, powerlessness and the desire to grow and be transformed. I am interested in the ways in which these sensations might find their way into a shallow space, on the two dimensional, painted surface. As such, a successful painting for me needs to have something of the synaesthetic about it.

What/Who are your inspirations?

Writers such as C.S Lewis (whose essay, 'Transposition', describes far more successfully that which I have touched on in the previous question), Peter Fuller, Roger Steiner and obviously the Brothers Grimm, Andersen and Perrault. In terms of artists, Watteau, Fragonard and Boucher (for their sensuality and colour), and more recently Soutine, De Kooning and Auerbach, for the ways in which the painted mark becomes a 'thing' in their work. 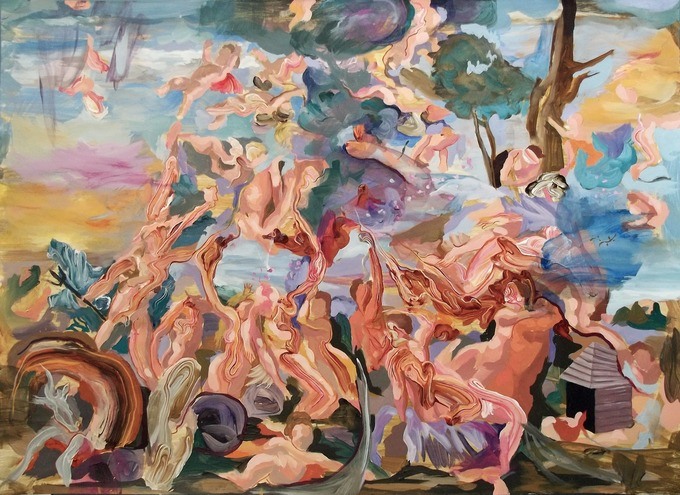 Study for The Temptation of St Anthony by Iain Andrews

Has your work always straddled the line between abstraction and figuration or is it a style that has evolved with your practice?

I think it’s been something that has evolved over time. Like most younger artists, I began with wanting to make things look as 'realistic' as possible, and this lasted mostly throughout my BA, where my final show was two paintings that I had spent many months on.

What's an average day like in your studio? Do you tend to work on more than one painting at a time?

On a day when I don't work as a therapist, I will usually get up, sometimes go for a run, have breakfast and some quiet time alone, then begin painting at around 11 am, finishing at about 5 pm for tea with the family. I'll then paint from around 8-11 pm but often this process involves painting over and sanding down previous works, as much of what I do involves taking off paint as often as it involves applying it. Rather like archaeology, in that the removal of previously applied layers that seems to give any kind of meaning to a work, and so things are nudged forward slowly then brought back and removed, only for the process to begin again anew each morning.

If it's a day when I'm working as a therapist, I'll tend to only work from 8-11, partly as a means of processing the day I've had. I almost always work on 4-5 paintings at a time, but because my work is generally quite small, this isn't the monumental task it can be for some artists. 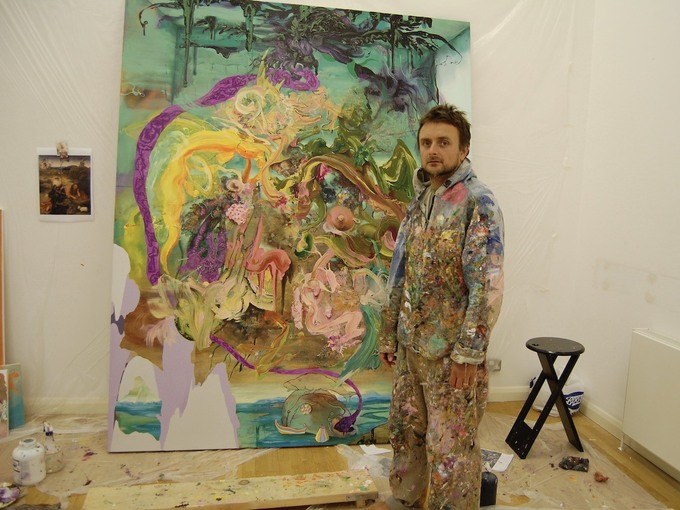 Iain Andrews in the studio

I'm honoured to be a member of the Contemporary British Painting group along with Paula Macarthur, Narbi Price, and Jo Whittle and I love their work particularly. I'm currently showing in Emergence with Jo Whittle, and her work is very strong.

I had a show in Beijing put on hold due to Covid, so it will be interesting to see what happens there once things are fully back up and running, and I am also getting work ready for a show with a gallery in London in January. 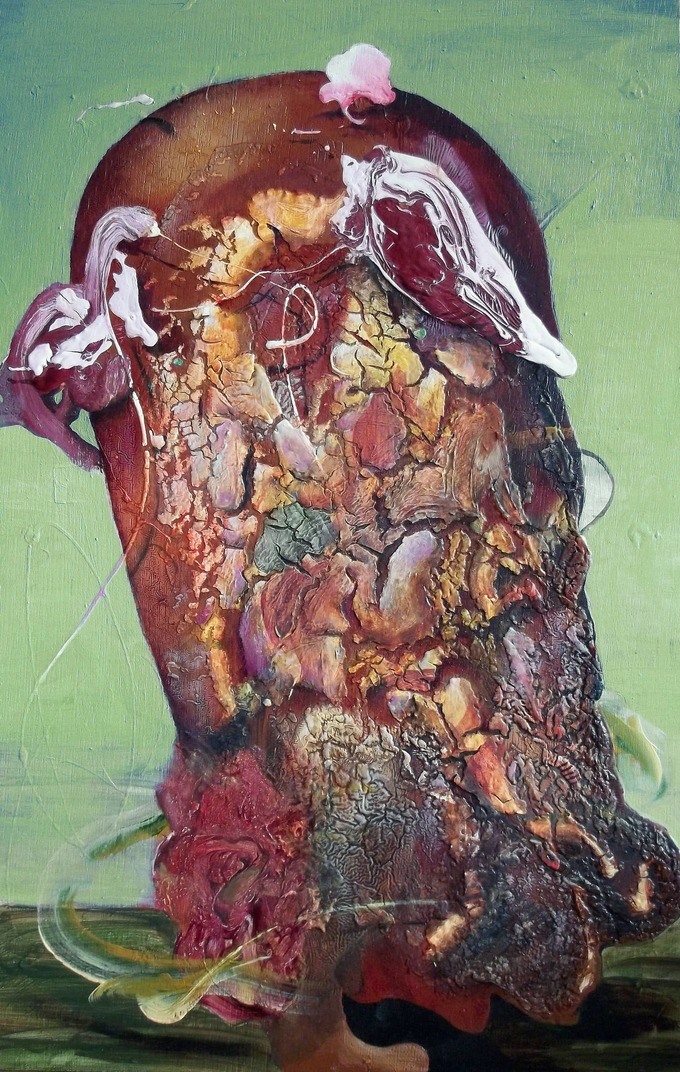