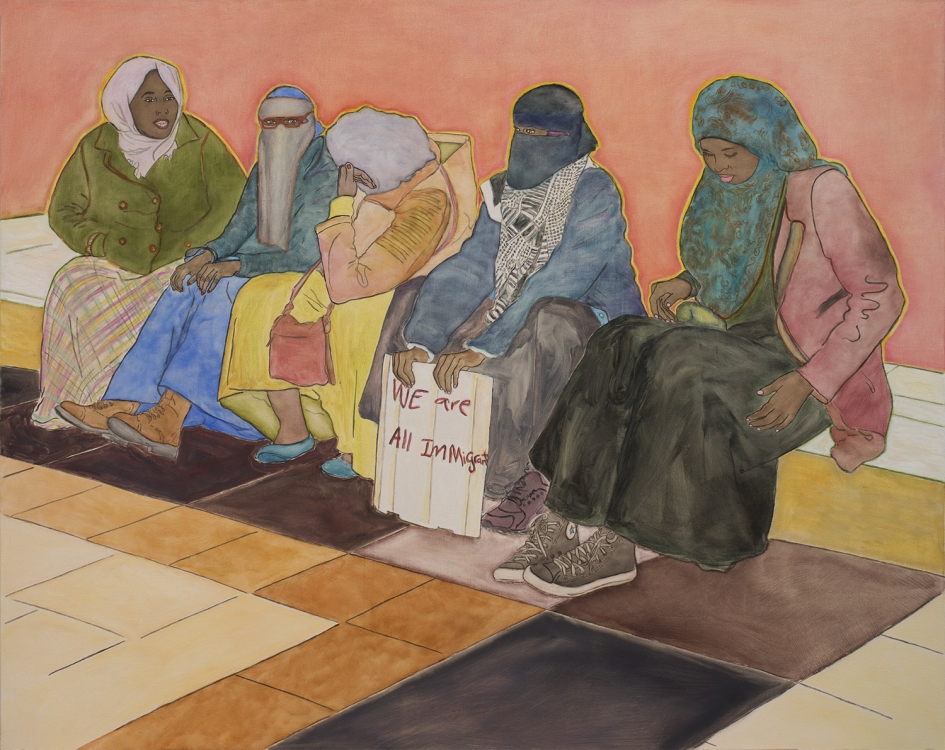 Born to immigrant Jewish parents in San Francisco during the civil rights movement, Malayka Gormally’s upbringing fed into her artistic interest in the “connection and conflict between people of disparate races, generations, and political beliefs.”

Two of Malayka’s most recent series Immigrant Women and Present / Tense, examine protestors and the “raw and uncomfortable energy” of their expressed beliefs. Malayka wouldn’t define her portfolio as political per se; her work focusses on genuine social interactions and connections. Recently these happen to exist in a political context.

Malayka has written a piece for us about her career and influences. 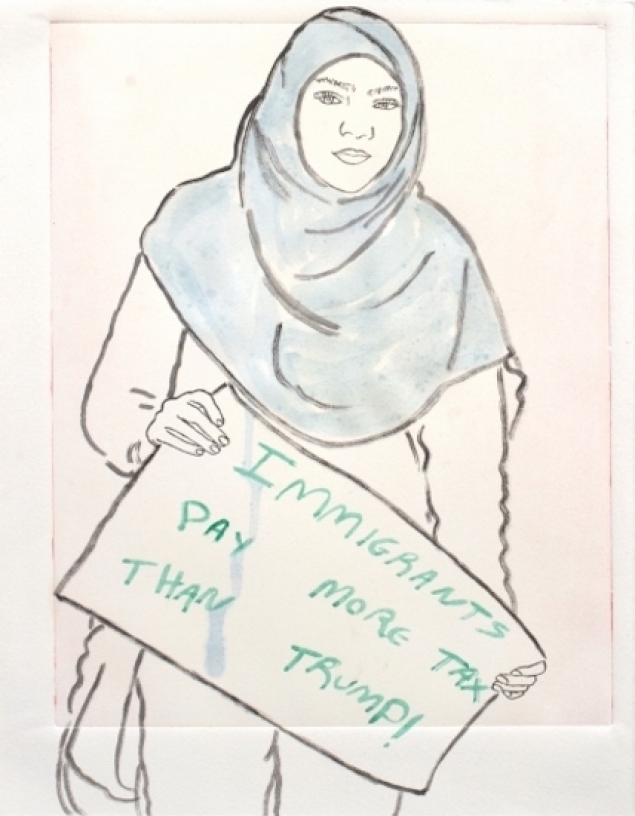 I'm interested in exploring connection and conflict between people of disparate races, generations, and political beliefs. In 2016, I was profoundly disturbed by the results of our presidential election and the consequential flood of assaults against our democracy. These events triggered my need to address current culture and politics somewhat more directly in my art.

My series Present / Tense (2017) was based on personal observation of activists across the spectrum, as well as hate-groups — observations made from the viewpoint of my participation in protest marches in Seattle in the winter and spring of 2017. The resultant paintings are reconstructed views of demonstrators that express the raw and uncomfortable energy of the public expression of political beliefs. The paintings are also influenced by my parent's stories of their experiences of WWII, which my father experienced in the occupied Netherlands, and my own visit to Dachau during a trip to Europe in 2013. You can see the gates of Dachau superimposed over a group of far-right protesters in my painting "Barriers." My father twice narrowly escaped being sent to work camps in Germany during WWII, so those gates are not an abstract idea to me. 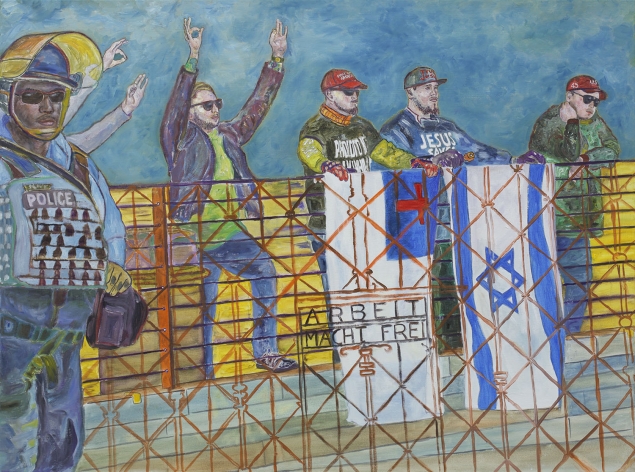 My experience participating in protests against anti-immigration laws triggered my own memories and inspired a second body of work. My father was an immigrant, as was my maternal grandfather. I grew up on my family's stories of war and hardship in their countries of origin, and, as a child, I vicariously experienced their challenges adapting to American culture. I found myself strongly relating to the immigrant women who were marching in the protests.

In 2017, I applied for and received a 4Culture Art Projects Grant (Seattle) to paint immigrant women, working with two nonprofits serving immigrants in the region. My recent paintings for my Immigrant Women series (2017-present) include portraits of members of the Ethiopian Community in Seattle at a monthly event. The series also includes portraits of people filling out their applications for United States citizenship at a local office of the International Rescue Committee. 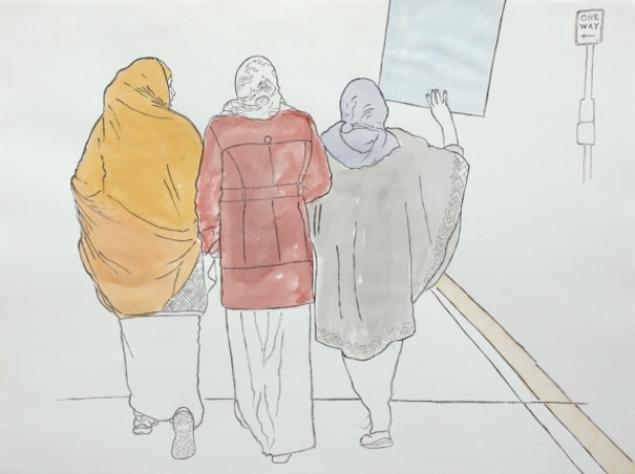 One Way Street by Malayka Gormally

Most of the immigrant portraits are of women, or women and children. At various points throughout my career, I've focused on women and families, because the subject matter is integral to my experience being a woman and a mother. I also want to push back against the historical prejudice in the art world that categorizes imagery of women and children as being of lesser importance, or merely kitsch.

The majority of my work is not overtly political, with the exception of the Present / Tense series. Most of my work focuses on the genuineness of individuals and human connection, even if the individuals are in the context of larger political and cultural upheavals. Robert C. Morgan best encapsulates this in his Blanden Memorial Art Museum catalog essay about my Immigrant Women series:

"In Malayka's drawings, we sense a human volition on the part of her subjects to become accepted for who they are — not as statistics but as a people with the same concerns anyone would feel no matter what destiny they have been given."

I've been painting since 1994, and my style has changed numerous times over the years. I was painting abstract works on paper when I became pregnant. The changes in my body, and my love for my child, affected me so profoundly that I switched to figurative work, initially painting other pregnant women and their children. I've been doing figurative work ever since. But the work has varied; I did oil portraits on wood panel for years, initially portraits of my family, and then for about 15 years, I made a living as a commission portrait artist. 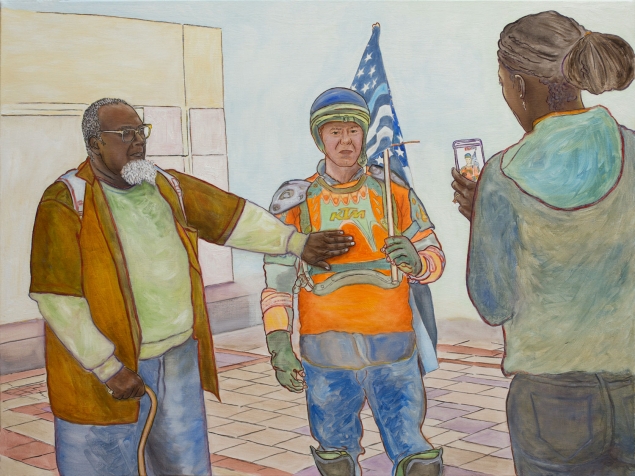 May Day by Malayka Gormally

About seven years ago, I broke away from doing primarily commission portrait paintings and developed several bodies of work. The first was oil on canvas paintings, based on people in my community, of disparate races and generations, overlapped by vertical panels of color, as if captured in film frames. These series were entitled Generations, and later, Gatherings.

After two trips to Europe, I found myself interested in the unselfconscious beach culture of Spain and Italy. For my Beach Life series, I painted people on the beach, primarily women, in water-based media on paper. Cognizant of my role as a woman painting other women, I addressed women's concerns about body size and image, and my paintings reflect a range of physiques and stages of life.

In 2017 I began my two most recent series: Present / Tense, which are the paintings of protest (oil on canvas) and my current body of work, Immigrant Women, which are water-based media on paper.

The connection between these different bodies of work is the linear quality of my figures, and my interest color - although my use of it is much more sparing in this current body of work. 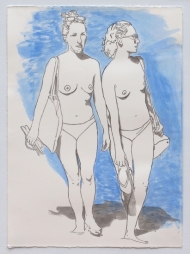 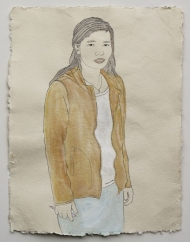 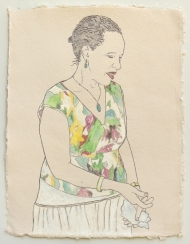 Woman in a Colorful Dress, Member of the Ethiopian Community in Seattle by Malayka Gormally

Woman in NYC Shirt Applying for United States Citizenship, With Help From a Volunteer by Malayka Gormally 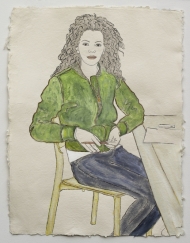