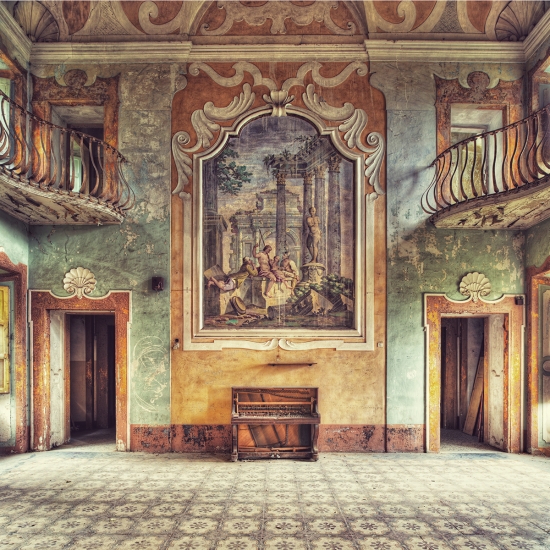 Built in the late 1800's, this Villa was created to break the mould of the stereotypical mental health hospitals. There were several villas built in this complex, but this is the only one remaining that has the original features and frescos. The architect built the villas in a scattered village style for a community feel, with many tall trees surrounding the villas, high up in the hills for clean mountain air, a splendid view and plenty of gardens and exotic plants surrounding the buildings. This style was increasingly used in the rest of Europe, as it represented a beautiful ideal, the patients felt the "space was harmonizing and did not upset the already troubled psyche".

This particular villa was south facing and very luxurious, it was divided into apartments to be allocated to the wealthiest residential clients/patients. During World Was II the villa complex was used as a prison by the Nazis. The building was completely abandoned in the early 90's. I walked in the blistering heat to the villa via winding roads through the beautiful parklands, passing all of the exotic palm trees. Scrambling up the banks and trying to avoid being seen by the neighbours was tough as the area is quite open. It felt like I was in another world when I walked inside. The lone piano, the huge stunning frescos upon the wall, the curved balconies. It is probably the most beautiful space I have been inside. It's not changed much, I have seen footage from the 20's and apart from a chandelier, flowers and a table, the place remains exactly the same, obviously, aside from the slow decay. 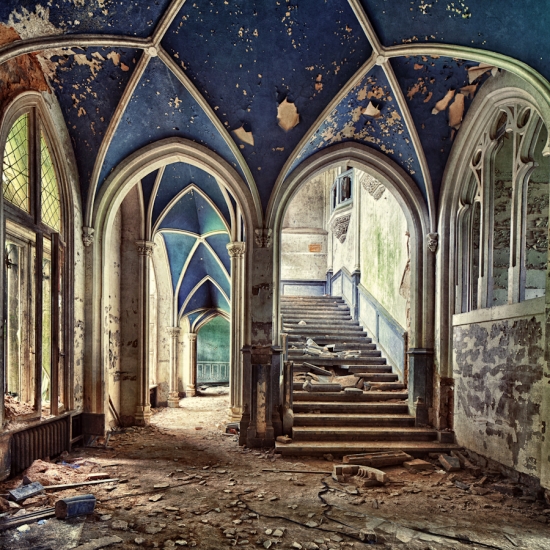 This is a beautiful castle which was a former holiday camp. It is in a heavy state of disrepair and despite several offers, the owners refuse to sell it. Parts of the interior has been removed to be used in another castle. The castle has many towers, and conical roofs in the neo-gothic style.
The clock tower of the castle is 180 ft tall. Initially the chateau served the family who owned it as a summer residence.
From 1945 the castle was taken over as a ‘holiday camp’ for children who suffered from ill health. It provided them with fresh air and open grounds to play in. In the 1990′s the owners began to search for investors, with the desire to renovate the castle. Due to the rising costs of maintenance and refurbishment, the plans failed and it was abandoned in 1991 and as of December, 2013 the owners of it have formally applied for licence to demolish the castle. From parking my car outside the grounds, it took me about 40 minutes just to get up the path outside the castle. It was fairytale-esque walking through misty woods and over the stone bridge. I climbed through a window and had to avoid fallen beams with rusty nails to get to the basement. From here I saw signs of it being a summer camp with changing rooms and a kitchen. I then reached the ground floor and was greeted with this impressive hallway, with the groined vault ceiling, stone staircase and beautiful decay. I had to work quickly as I was visible to the security guard on the ground floor. Like most of my square artworks, it is a composite image made up of 15+ images where I photograph the ceiling, floor and middle section of the scene using as special lens. I shoot 5 or more exposures to obtain a balanced exposure, this effect is called HDR. Using this lens and technique gives me a wider scene without any lens distortion and it keeps all the verticals straight. 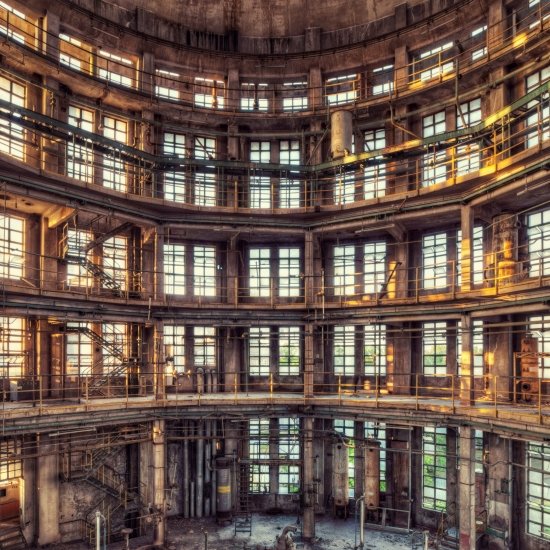 This was a chemical plant which produced sugar beet in a large industrial city. I struggled to find substantial context on the place but I discovered that it will soon be converted. I walked along some disused railway tracks, weirdly feeling like I was in the film Stand by Me on my next adventure, I was very concerned that a train might suddenly come round the corner. Thankfully the line was as dead as a dodo and I covered myself in mud crawling under the fence, then sneaked through the back way to reach this huge circular tower. It was at least 10 floors high and windows covered every wall. The sun setting illuminated it perfectly. I thought the symmetry in here was perfect. I again used the composite technique with this image. 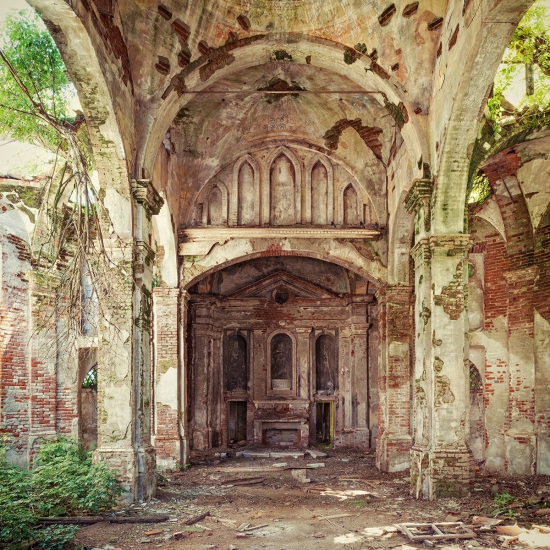 This is a stunning 17th century church I discovered in a tiny village. It is a huge building but largely overtaken by nature. On the side of the road it just looks like a cluster of trees, with a small door just revealing it's true interior. Upon entry the size really blew me away. It felt so open yet so hidden. I have been unable to discover any history behind it. It's quite a mysterious building. 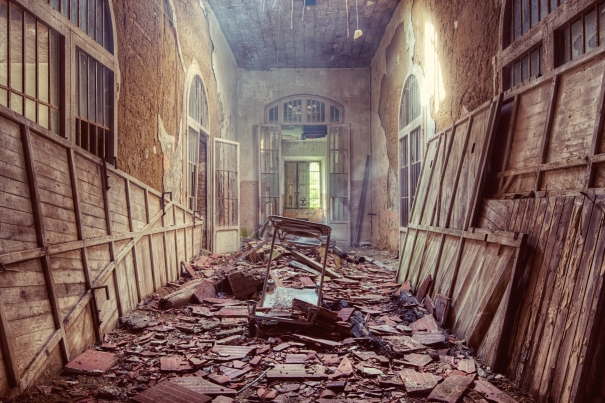 Built in the late 1800's, this hospital served a wide area. At it's maximum capacity, it housed 5000 patients. It was right up in the hills and the architect built the pavilions in a scattered village style.
What made it one of the most important mental hospitals I've come across is definitely to do with a patient who was hospitalized their in the 50's. During the particular patient's time there he used the buckle of his waistcoat to graffiti the outer walls of the pavilion. His piece was 180 meters in length and 102 metres on the handrail of a staircase. This was considered a masterpiece of Art Brut. Directors and filmmakers sought to keep the memory of his work alive. The graffiti still exists there today, but is in a bad condition. I used a smoke pellet in here to diffuse the strong sunlight coming through. 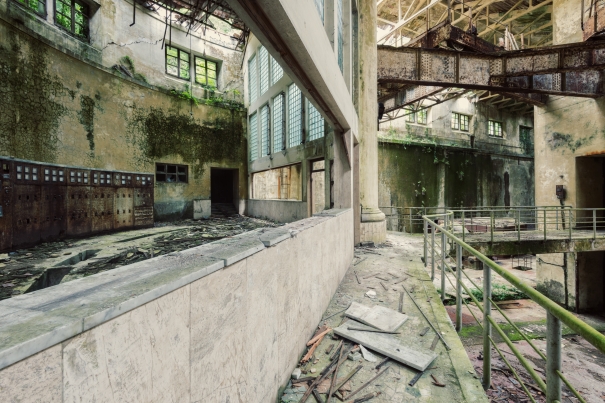 Built at the start of the 20th century, this vast power plant was the main facility which produced calcium carbide. It had distinct advantages; the ability to produce electricity derived from nearby rivers and the site was right next door to a quarry. The plant endured many changes due to World War II and electricity laws. Competitors eventually forced the plant to close in the early 80's. After the closure the space was used for several movie sets. After sleeping in a car in the car park opposite, I awoke early. I met two of my Italian contacts here who love the history of the power plant. The place was vast and I had to walk up a large hill then climb down inside the site down a hill and several levels of concrete. 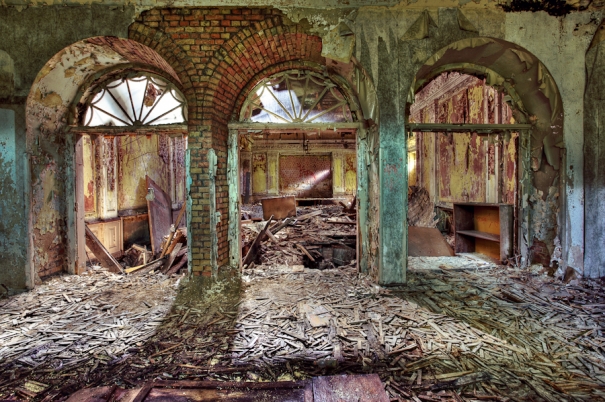 This was a derelict Care Home that was used as a hospital in World War I. It also has other uses, such as a rest home for soldiers and politicians. It’s situated in the German mountains and has been abandoned since the 90’s - it has a beautiful amount of decay. I snuck into it via a very tight back window. I felt like a contortionist! To take this photo I was balanced on a very thin rotting wooden floorboard, it was a task to get my tripod set up without falling through the floor! The colours were very varied in here and there was a lot of texture. It was a photo I could not pass on taking, even if it was risky. 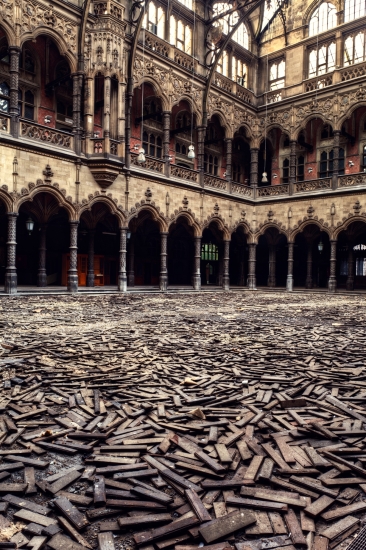 This was originally built in the mid 1500's, and was used a stock exchange. It was the first building of its type in the world. The entire complex burnt down in the 1850's, and the renovated 19th century neo-gothic conversion sits abandoned today. Queen Elizabeth was inspired by its design and had an architect build a similar building in London. I have been here three times now, sleeping inside the offices. Being woken up by a cathedral is a great alarm clock; it got me up at the crack of dawn to photograph the place with early morning light. It is being converted now. To get inside, I had to climb some scaffolding to get into a window, then I went across the roof and down into the top floor. I went out the easier way, a door onto a busy shopping street. 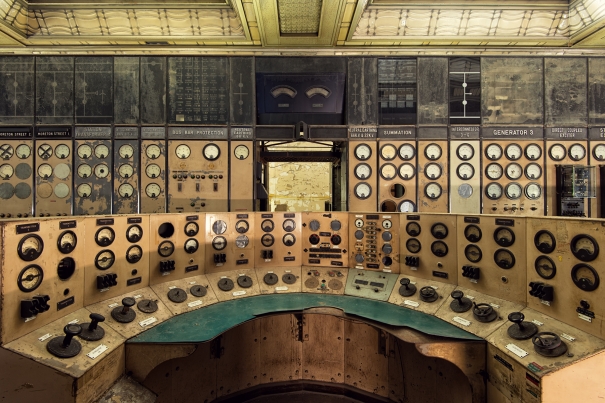 Battersea Power Station is a decommissioned coal-fired power station located on the south bank of the River Thames, in Battersea, an inner-city district of South West London. It comprises two individual power stations, built in two stages in the form of a single building. Battersea A Power Station was built in the 1930s, with Battersea B Power Station to its east in the 1950s. The two stations were built to an identical design, providing the well known four-chimney layout. The station ceased generating electricity in 1983, but over the past 50 years it has become one of the best known landmarks in London and is Grade II* listed The A Station's control room was given many Art Deco fittings by architect Halliday. Italian marble was used in the turbine hall, and polished parquet floors and wrought-iron staircases were used throughout. I slept in the show room overnight at minus degrees 4 years ago, and then returned again in 2013, where I accessed the Control Room A, with so many buttons and dials and incredible art deco features, this is probably one of my favourite locations, pouring with historical and aesthetic interest.

Gina's work in on show in London until April 9th to book an appointment click HERE. To view GINA'S full page on Rise Art click HERE. 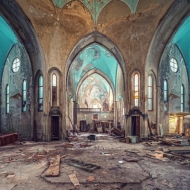 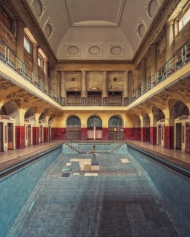