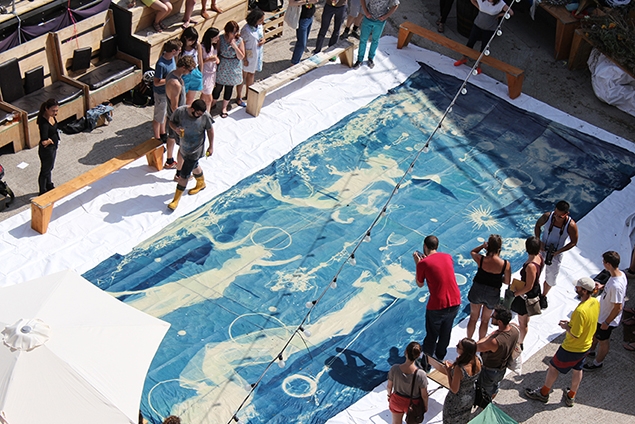 In 2012 all eyes were set on Hackney Wick and the Olympics’; this summer, the artist community took the limelight and shared its diverse artistic talents to the world. Following a commission by Hackney WickED Arts Festival, artist Rosie Emerson beat a photography world record with her 46.81 square metre cyanotype.
Rosie Emerson has lived and worked in Hackney Wick, and for the past 5 years she has taken part in Hackney WickED, the annual arts festival, in various organisational roles. This year she took it upon herself to attempt to break the world record for the world’s largest cyanotype photograph.
The previous world record is held by the French, and Rosie has beaten it by producing a print measuring 6 x 9 metres in size.
Cyanotype printing was developed in the early 19th century and used by engineers to reproduce notes and diagrams known as blue prints. Influenced by botanist Anna Atkins who brought this technique into photography, Rosie’s recent work has adapted the cyanotype technique and given her own modern spin. 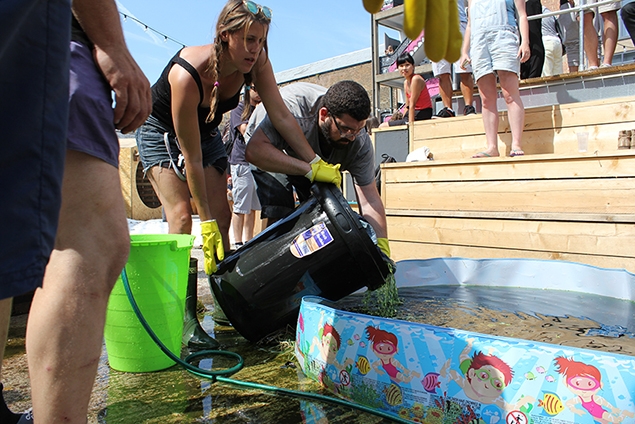 Cyanotype photographs are produced by placing the object or a negative onto paper, which has been coated, in a UV light sensitive emulsion, the work exposes to the sun, the result is a deep Prussian blue photograph.
In a UK first, this record breaking artwork incorporated 6 costumed models, arranged onto the surface of the fabric alongside nets, branches, flowers, cut out shapes, sugar, hula-hoops, chandeliers, and shells. Mermaid like tails were created out of fishing nets and fabric and tree branches became seaweed. 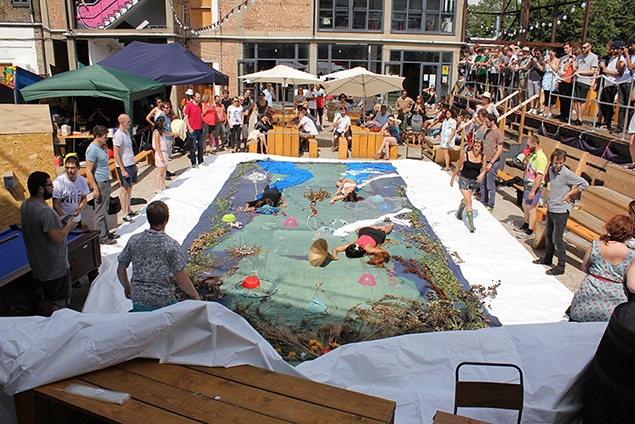 The photograph took just a few minutes to expose in the sun, during which the audience had the opportunity to watch the photograph change colour and expose.
Rosie, who is not usually the competitive type, explains why she is excited about creating a cyanotype of this monumental scale:

“Cyanotype’s have an element of magic about them, I look forward to sharing the ‘reveal’ with a live audience”

Rosie has exhibited widely in the UK, as well, Europe, LA, Singapore, Hong Kong and Dallas. Rosie has also worked with Sony, Triumph Underwear, Redbull, P&O Cruises, Toms, and Jewelry designer Annoushka Ducas. Her unique collage style as led to her work being featured in the likes of Vogue, Harpers Bazaar, Another Magazine, The Financial Times Magazine. In 2012, Will Ramsey; founder of The Affordable Art Fair deemed her work ‘Beautiful, highly original and certainly collectable’ The Sunday Times Style Magazine.
Hackney WickED Art Festival, in its 6th year, has established itself as one of London’s biggest and certainly most uniquely creative art events: promoting local culture and providing a platform for emerging artists to showcase their work alongside more established names whilst celebrating the creative community that resides in Hackney Wick.
And if you want to keep track of the best in Art and Design, Take our ART STYLE QUIZ and BECOME A MEMBER. It is free and you'll get access to the best new art from top Museums, Galleries and Artists.