Kate McCrickard has recently joined Rise Art, bringing her portfolio of elegant and contemporary figurative artworks to the platform. Often inspired by the happenings in Belleville, Paris, Kate's works lend them a certain Parisian grittiness and edge while pertaining a sketchy and highly diaristic nature. Corrections, scrapes, tears and fingerprints are left unadorned, delivering vigour and character to all her pieces.

I make figurative paintings drawn from memory, imagination and years of observing and sketching figures in the street, in bars and those who cross my path in daily life. The style is loosely expressionist – I’m as interested in the paint and the form as the subject: one drives the other.

My application is pretty conservative – oil paint on canvas. I also make monoprints and pastel/charcoal drawings on brown or grey card, that I enjoy for the speed and fluidity and inceptive idea making. 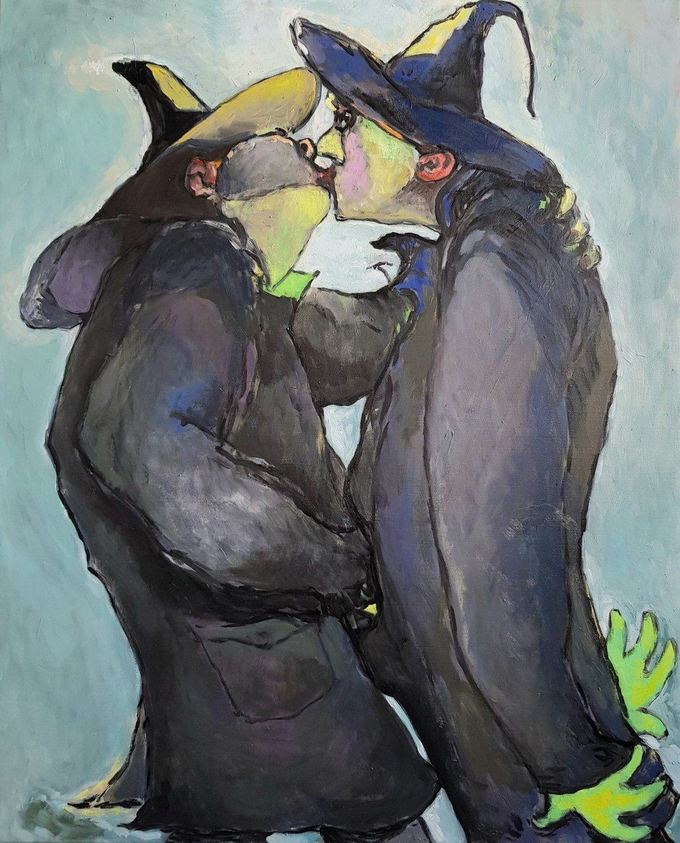 Tell us a bit about the inspiration behind your practice

Inspiration comes from long hours of working that leads to the occasional break through and progression. I hold to the musician, Nick Cave’s dictum that you turn up to work from nine to five (or longer if possible) as for any job. You have to put in long hours and without discipline and time to hone your craft, you won’t get anywhere. Just like musicians and artists, you have to work your skills – it’s not at all the romantic misconception of inspiration falling from the sky and mad creation. My imagination gets unlocked through long hours of process and failure. I also get inspiration from music, reading and other historical and contemporary painters. 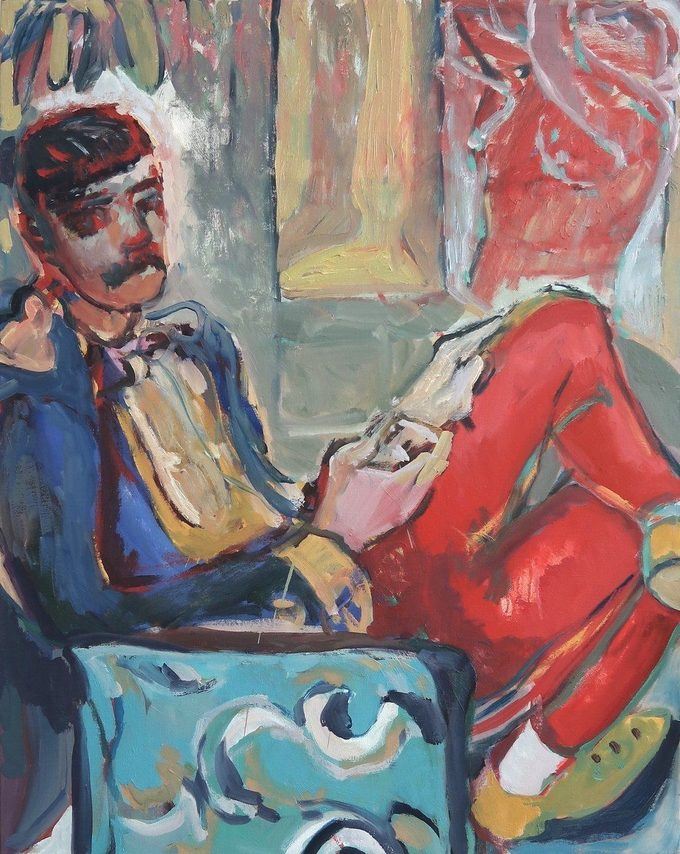 How do you go about choosing the subjects and scenes for your paintings?

The field is open – I would like to paint everything, but some things are more appealing and are working better than others at the moment. When I was at home with three small children, drawing them, brought me back to the figure and there were many scenes of eating, feeding, at table; subjects that were within reach, like the local café where I could sketch from behind a pram. Now that the kids are older, I’m looking farther afield – I did some drawing backstage in cabarets, or just choosing imaginary historical themes, like ‘Death and the Maiden’ that came to mind when thinking of plagues and pestilence. The human figure and our contemporary cancel or “ghosting” culture has come to the surface since Covid made ghosts out of a lot of us. Drawing remains at the heart of my practice, as does printmaking, as a rich companion and aid to painting. 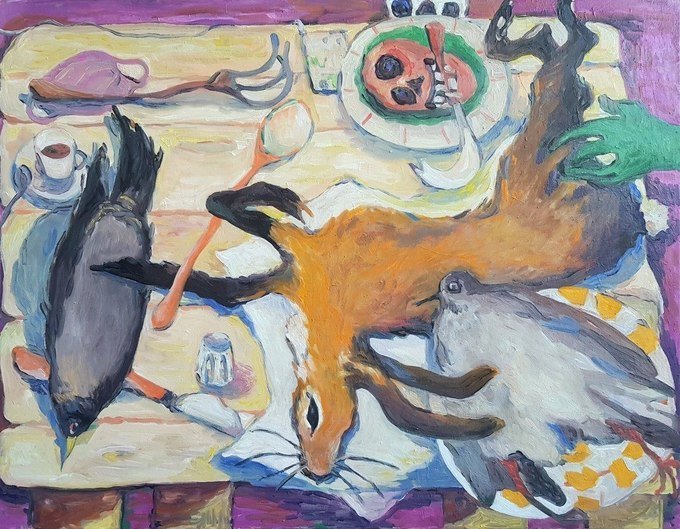 How has your practice evolved in recent years?

I’ve slowly managed to move away from working from sketches made after life that I worked into paintings, to drawing images out of memory and imagination: painting phantoms rather than people I have actually seen and observed. This is giving me more freedom and confidence. I’ve built up a repertoire of skills and images, characters too, that come from art historical memories and real life memories, that I can now pull from with more ease. I’m also getting more fluidity into the oil paint – hard won – and my drawing has become more adept. 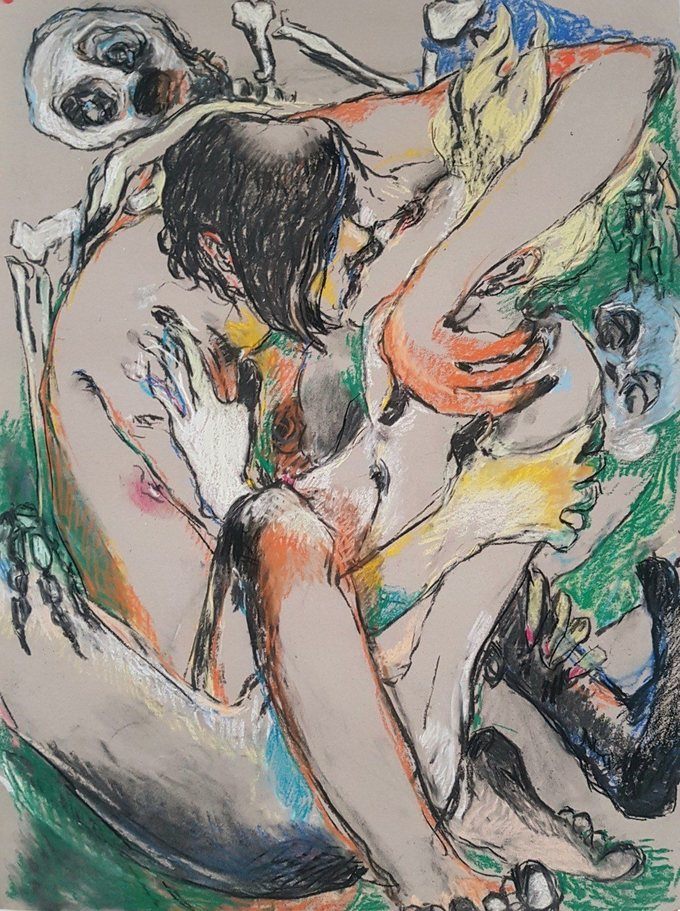 So an average studio day – I get to the space before 9am, a fair amount of tidying up, brush cleaning, palette scraping – faffing about, looking (with disappointment) at the previous day’s results, then long hours of redrawing, reworking, trying to solve the many problems that painting throws up. It sometimes takes me a while to ‘see’ the image I want on a canvas and many of my works have a thickish surface from reworking and correcting; many ghost images lie beneath. But the pentimenti can add body and texture that I usually like. I listen to BBC podcasts and audio books as I work to help me focus and music at the end of the day. It’s pretty solitary. It takes a long time for me to get into a painting and to also get the paint working as I want it to. Often I just can’t see the image or locate it on the canvas for days, so I like to have several canvases on the go at once. 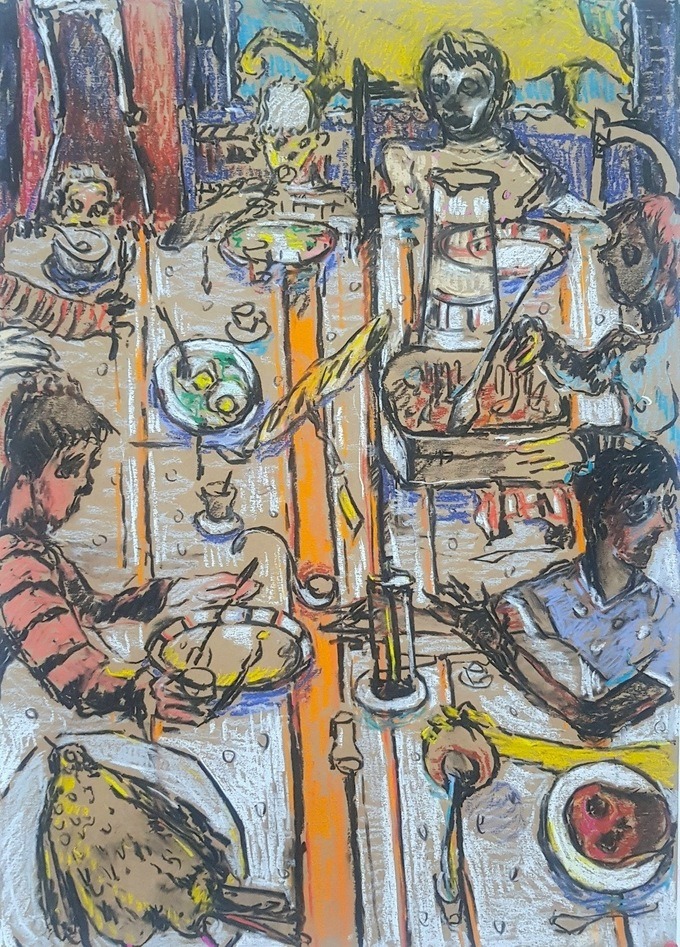 I studied Italian early renaissance, Pictish and Roman art when at Edinburgh university. Fascinating it was, but it didn’t guide me in learning to paint. I’ve learnt much more since moving to France and have belatedly discovered the masters, particularly Pierre Bonnard who nobody interested in paint can ignore. And Édouard Manet for his decisiveness – I’ve learnt from him to use printmaking as a corrective to painting too. Also Munch. Vanessa Bell and contemporary masters like Salman Toor and Guglielmo Castelli.

I’ve great respect for Bruce McLean’s work and I’m really enjoying the tacit scenes in Amy Drury’s work. I love the energy in Day Bowman’s mark making. Also Kate Lowe’s paintings – I’ve huge empathy for other women painting so well with their children alongside. The choices for women remain hard. 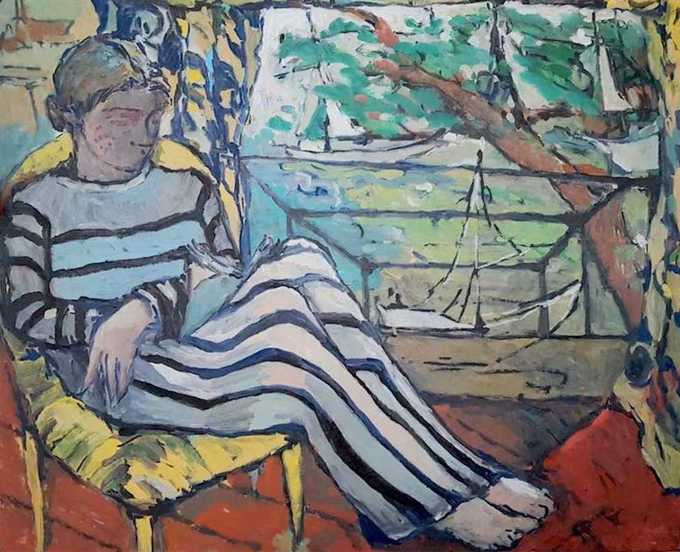 I have a new gallery in Tai Pei. I’ll be showing with them for the Tai Pei art fair in October and I’ve no idea what to expect  as my work has no standing whatsoever in the East. I’m also working on a piece on the theme of the "tronie” for the International Fine Print Dealers Association (IFPDA) fair in New York in Autumn in an exhibition curated by Susan Talman, ex-editor of Art in Print magazine and current writer for the New York Review of Books (NYRB). I’ll be showing works at the British Art Fair (BAF) in the Saatchi gallery, London this September and there should be a small solo show in London coming up.