Contemporary painter Georgina Clapham has recently joined the platform. Working primarily in oils, she creates detailed figurative works that have an element of surrealism about them. Georgina takes inspiration from fashion and folklore, blending new and recognisable motifs with older, more traditional ones. To welcome Georgina to Rise Art, we caught up with her to learn a bit more about her practice. 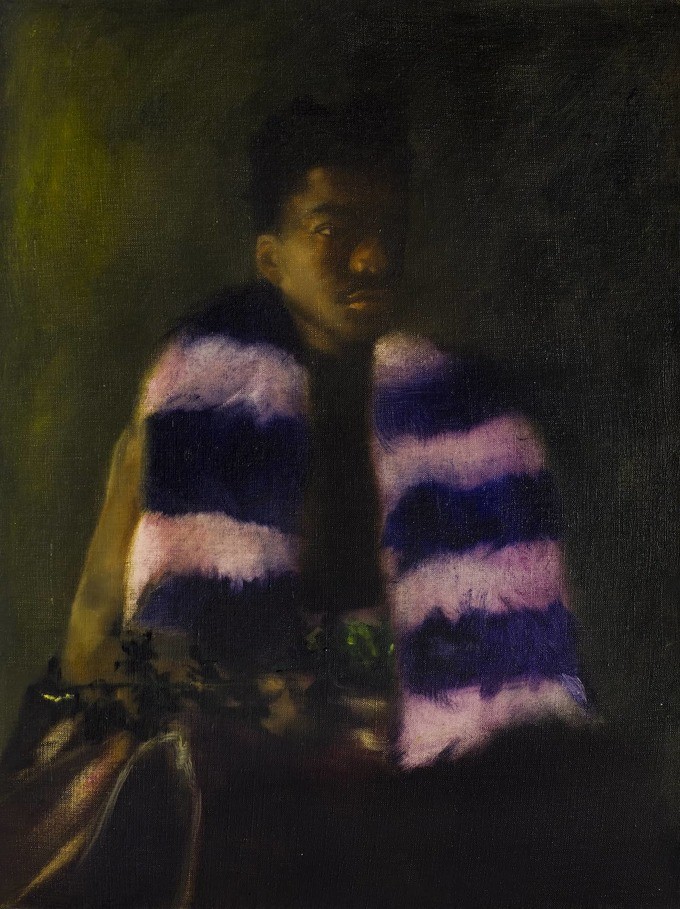 How would you describe the art you create?

I make life-sized figurative oil paintings on linen, smaller works, and etchings. My paintings invite you to experience another world, I create my own contemporary mythologies inspired by the archetypal narratives in Greek Mythology and Folklore as well as compositions from the Early Modern European period. They are reworked using my own experiences of living between London and Dorset; influenced by my generation including references to contemporary fashion and subculture, gender, identity, magic, nature, and mysticism.

Tell us a bit about the inspiration behind your practice

My first love was 15th and 16th-century early modern European painting, the attention to detail and the psychology of these works, especially how the inner world of the sitter is expressed through clothing, the rich furs, and the jewellery. I have a deep appreciation and knowledge of costume and fashion history that threads throughout my work; I reflect on how meanings and symbols have changed over time and how today’s trends fit into this timeless dialogue.

My friends are the subjects of my paintings, I try to bring out their psychology, at best my paintings have an intensity and drama that transcends the original subject matter. I also refer to fashion archives and magazines such as Dazed or I.D for inspiration, often the friends I paint are the ones in the fashion magazines, models, designers, and jewellers. This is contrasted with an otherworldliness that I think comes from my upbringing in Dorset, being surrounded by historical sites or woodlands, believing in the tarot, and fairies when I was little, storytelling, magic and a connection to nature have always been there for me. I often juxtapose the natural with the artificial in my works and beauty with ugliness. 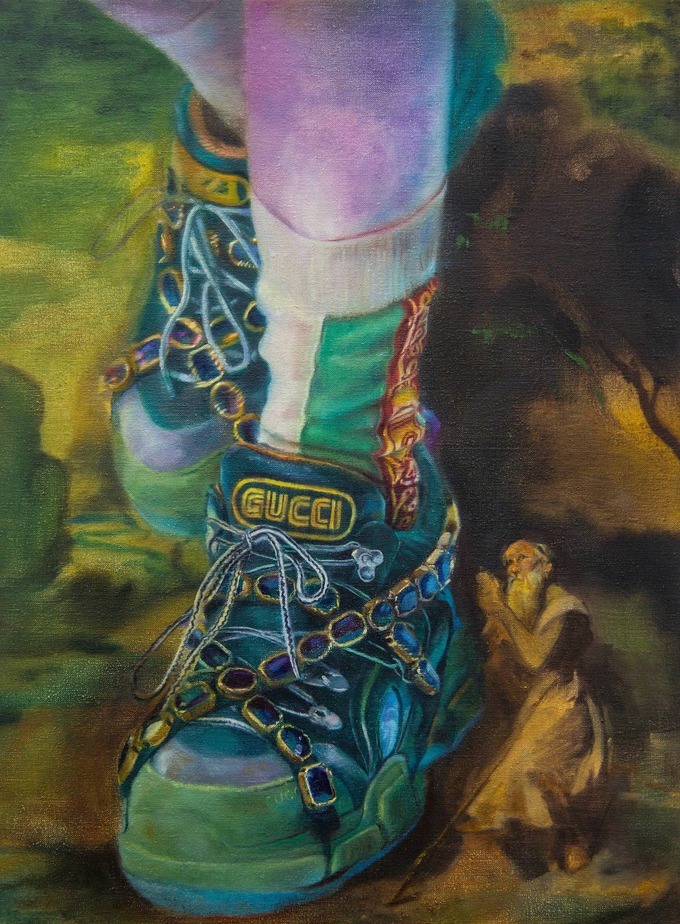 'The Visitation of Saint Paul the Hermit by Gucci', 2018, by Georgina Clapham

How do you go about choosing the subjects for your paintings?

They are people I know personally, artists, designers, models, and musicians, often people appear or reappear at a moment when I am thinking of an idea for a painting and wondering who to paint. I am drawn to people who are not afraid to stand out, they might have one strong identity or many, like a chameleon. I like it when people are willing to work with your ideas and are not worried if you create something a bit ‘ugly’ or unnerving, they understand that a painting especially a portrait has a dualism, parallel energy between the sitter and the painter; they trust me to tell their story in my own way and it’s not about anyone’s ego. Often, I will use costumes and some of their own clothes so it’s like a portrait and an extended narrative about our generation. I recently painted artist Jenkin van Zyl who I met visiting the RA Schools, in his stage-worthy Elizabeth I outfit as he often wears this kind of thing day to day.

How has your practice evolved in recent years?

It is more experimental; I have incorporated fabrics into the work such as PVC or cotton and made 3D wearable objects to accompany my paintings. In 2019 I collaborated with Turkish fashion designer Dilara Findikoglu, designing and painting some gloves for LFW. I’ve also become less reliant on a singular image for source material for my paintings. I used to go to great lengths to produce a perfect photo to work from, now I’m making collages and have been painting and drawing from my imagination. I think this has given rise to more irony in the works, painting something which you have great adoration for but it’s also witty and silly. I started a series of shoe paintings which began just before my Debut Solo show at Triumph Gallery, Moscow in 2018, I included them as some light relief, a way to break up the space by being hung lower down, then I started to develop the imagery and it became a series. 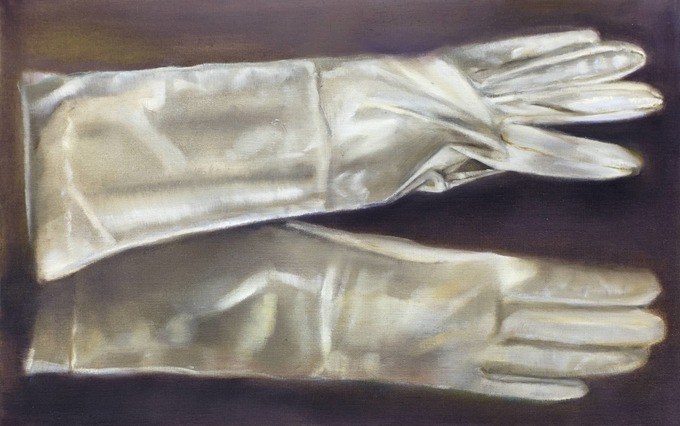 I get in at 10am and I paint until 8pm most days. Now my time is divided between commissions and my own paintings. Using my photographs and drawings I don’t always have a fixed idea of the desired outcome before I start, so a lot of time is spent experimenting at the underpainting stage. I get into a trance thinking about the details, moving and adapting the imagery. Even though I am quite methodical I find pleasure in problem-solving in real-time with oil paint as you’re more likely to discover something new. I try to allow for mistakes, intuition and subconscious decision making right until the final stages.

Paula Rego, Michaël Borremans, Goya, and Velázquez but also the painters that I grew up around, I met Ben Spires when I was an art student at 18, I love the play between beauty and grotesque in his works and the layers of reference, the psychology he creates is so powerful, it wakes you up to what great painting can be. Recently I’ve spent more time around painters who refer to a more digital realm, in London where I am now based and in LA. Oli Epp, Canyon Castator and Emma Stern, for example, the comedy in their work is brilliant, plus the layering of imagery and cultural references is something that I really relate to. 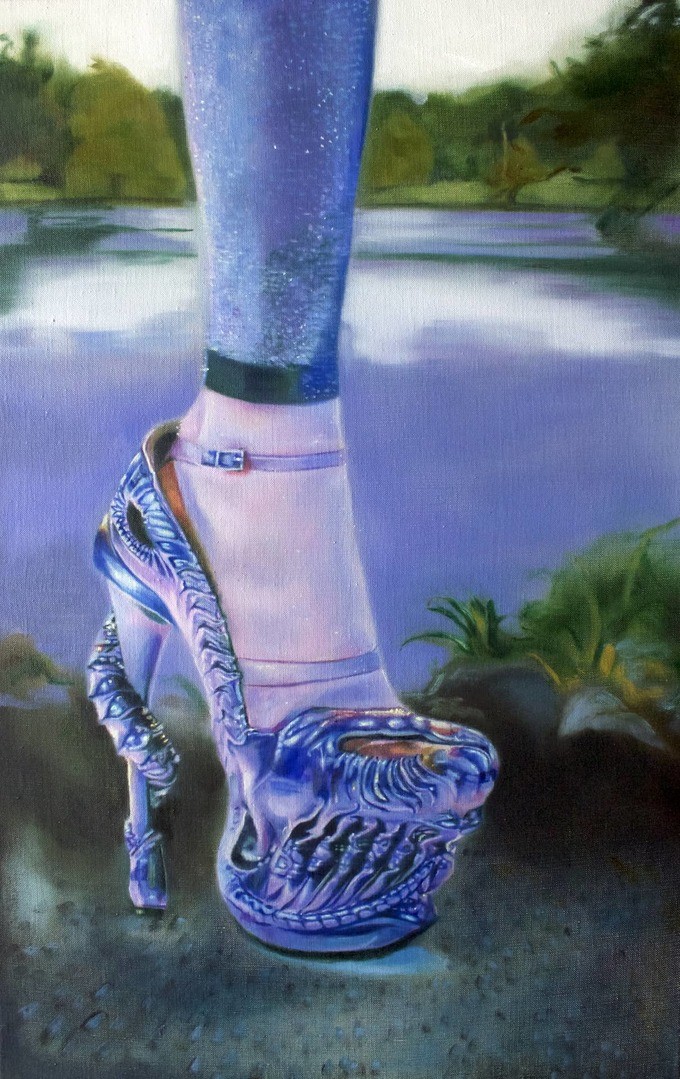 I’m a huge fan of Kelvin Okafor, his drawings are sublime and Marianne Hendriks, I really like her traditional technique.

I’m working on a new series that started with automatic drawings I made whilst in LA this spring. It’s experimental, it’s comical, it reflects on the society we live in and my position as a woman within my own mind and the art world.