Figurative painting has not had a name for long. Although it has existed since the Stone Age, it was only after the advent of abstract art in the west that the need arose to distinguish paintings that looked to represent real-world subjects from those that didn’t. This distinction, however, does not make the worlds we see in figurative painting any less unlimited than in abstract art.

Stretching far beyond portraits and still lives, the exhibitions below, featuring work by some of today’s foremost figurative painters, range in subject from the frivolous and fantastical to the distressingly real. We will travel from worlds that have never existed (but that might sometimes reference the one that does) to a world that does exist (but that we might wish didn’t). 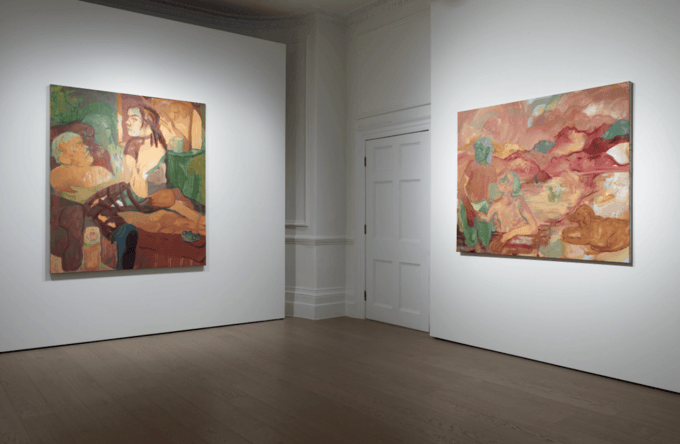 Antonia Showering has become one of the better known members of a young generation of figurative painters. I first saw one of her works - Inside Out, a portrait of the artist’s brother holding a newborn baby, both of their faces obscured, in a surreal, green-tinted room - in a group show at TJ Boulting in Fitzrovia in 2018. She was a hotly-tipped but still largely unknown artist at this point. Now, with eleven paintings on show at her first solo exhibition with Mayfair’s Timothy Taylor gallery, it’s fair to say that this has changed.

Showerings style and process, however, have remained largely the same. She starts each painting by spilling oil paint on a stretched canvas, allowing it to pool and gather in random configurations, and then turning these forms into fantastical landscapes. Leaving the foundations of each painting to chance and then making them intelligible, the way that Showing works has been described as “a Rorschach-blot process”. The subjects that emerge with Showering’s help tend to be faceless, lacking fixed identities. Like inkblots in a Rorschach test, they are open for the viewer to project their own ideas onto. Although the artist says that the subjects of the paintings in this exhibition are “the people I love or have loved”, she agrees that they are “painted with enough ambiguity for the viewer to recognise something from their own realities”.

In Vladimir Nabakov’s short story Symbols and Signs, the protagonist suffers from a condition called referential mania, which causes him to believe “that everything happening around him is a veiled reference to his personality and existence.” Walking around this exhibition, I understand what that might feel like. The indeterminate characters in indeterminate landscapes surrounded by shrewdly placed symbols - an upturned toy car here, a fried egg there - allow us to place ourselves in Showering’s world, the objects in the paintings taking up their own unique personal relevance for each viewer. 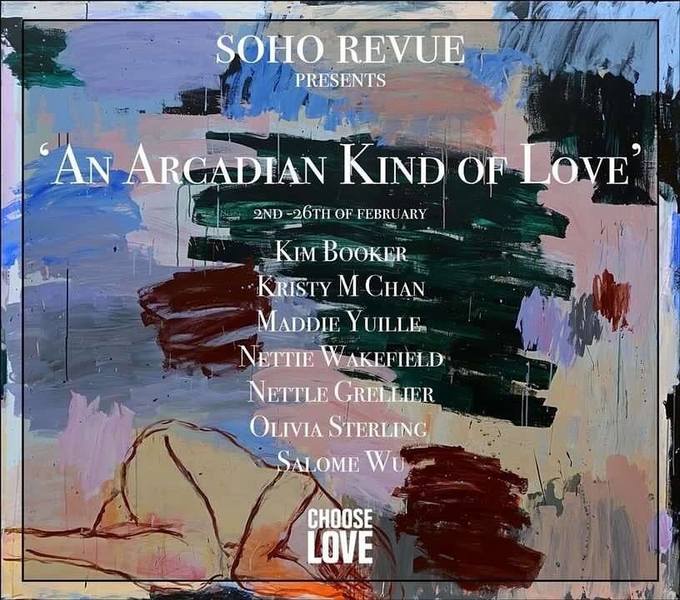 Like Showering, Nettle Grellier paints her subjects into fictional worlds. But, in their definition and specificity, they belong less to the viewer and more to the artist. Their faces display a range of emotions, pleasure, discomfort and confusion seeming to come up the most frequently. I’m not surprised by this, given the paintings’ focus on physical sensation, with fingers, worms and cotton buds often entering ears, eyes and mouths.

In this exhibition Grellier’s work is on show alongside that of six other London-based women painters, presented as a response to the Arcadian Lykaia; a pagan celebration of fertility and health. Thought of by some as a precursor to Valentine’s Day, Lykaia was much more sexual and violent than the celebration of love that we know now. In place of heart-shaped balloons and cards, it featured animal sacrifice, flagellation, and sexual union between participants. Each of the artists on show deal with intimacy in ways that deviate from standard ideas of romantic love. In Maddie Yuille’s We hung like bats a figure gazes to her right at an anonymous companion, reaching in the direction of their face, which sits outside of the canvas. In Swirling Down from the Red Fountain, Whispered, Then Breeds New Life, Salome Wu’s subjects make no eye contact, instead facing directly forward with their eyes closed. A union between them - perhaps more spiritual than romantic - is suggested by their intertwining long hair and matching abstract forms beneath their faces, which could be rosettes, starfish, fireworks or something else entirely. Taken together, the paintings show us a range of ways that we might understand and experience love outside of the traditional western paradigm. 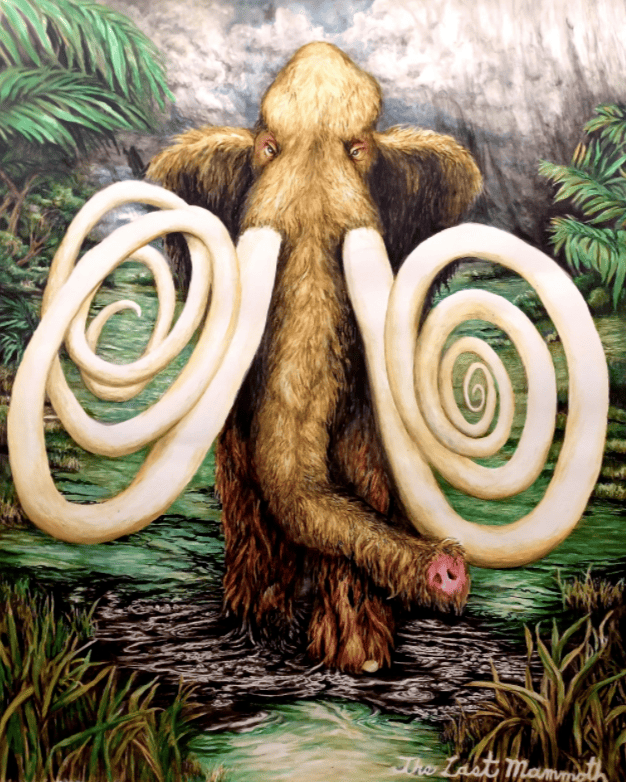 Both an insider and an outsider, Robert Hawkins is an art-world anomaly. Born in California and with no formal arts education, he managed to find a place in the highly mythologised Lower East Side art scene during the 1980s and 90s. He was a contemporary of, and his work collected by, Andy Warhol, Jean-Michel Basquiat and Keith Haring. He moved to the UK in the early 2000s and can be found today in South London’s Woolwich where he works and exists, as Glenn O’Brien lovingly put it, “on his own roving, druidical, picaroon, anarchic, swashbuckling terms.”

Name-dropping aside, his work is a very worthy stop on our tour of figurative painting. His style is unique, combining the wide-eyed naivety typical of the broader “outsider art” tradition with a more playful cartoonish style that the artist might have encountered in 1980s New York through artists like Robert Crumb and Raymond Pettibon. He depicts his own version of scenes from a past world filled with dodos, mammoths and neanderthals, many of which include descriptive captions like “the last mammoth” or “the first artist”. The combination of his subjects, style and captions make the show feel like something between a light hearted comic strip and a serious museum exhibit. Hawkins’ style is different to the looser, more gestural one employed by the artists we have seen so far. However, underneath this he shares their interest in painting as fiction; as the construction of worlds quite different to our own.

Daniela Yohannes, I Surrender my Body to Water and Fire, Addis Fine Art 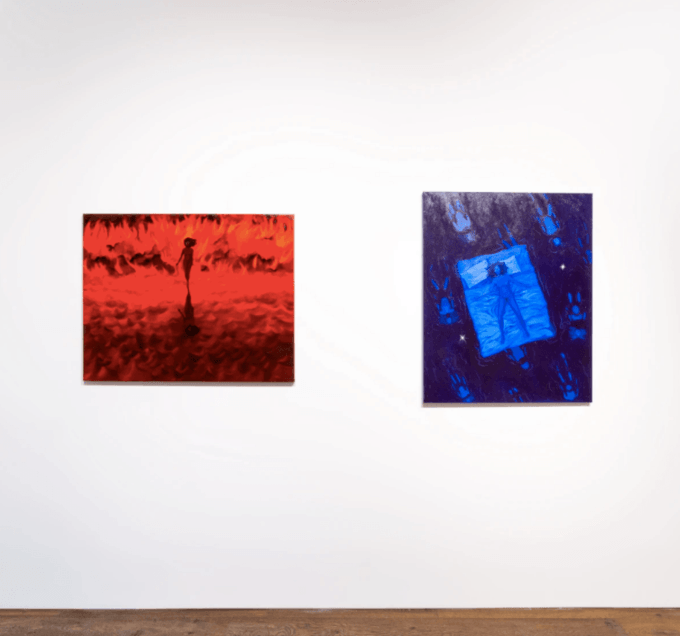 Installation view: I Surrender My Body to Water and Fire by Daniela Yohannes (courtesy of Lucy Emms and Addis Fine Art)

In some ways, the subjects of Daniela Yohannes’ paintings are as made-up as any of the others we have seen so far. They are inspired by the artist’s dreams - or nightmares - where she finds herself afloat on her mattress in vast oceans or fleeing from fires. In another way, they are heartbreakingly real representations of the experiences faced by migrants. Some of the figures stand alone, looking out at the viewer with vacant eyes. Others, like those walking in line through the barren landscape of If We Are Not Claimed By The Desert, lose their identities to the crowds they belong to.

There are some realities - and it is important to understand that, although stylised and sometimes reimagined, this exhibition ultimately depicts realities - that can’t be captured with words. Although we hear heartbreaking stories about the plight of migrants in the news almost daily, their emotional intensity is lost in the rigidity of language. Peter Doig, an important figure in the recent history of figurative painting, notes this difficulty: “you can literally describe what you’re looking at but to actually get at the emotion you feel is very, very difficult.” This is where figurative painting steps in. A good painting - like Yohannes’ - can both depict and inspire emotion in an immediate, visceral way that is impossible with words.