As art lovers, I think that we should expect to be profoundly touched by only a very small proportion of the art that we see. Somewhat arbitrarily, I place the figure at around 5%. I think that I understand – at least to some degree – and appreciate the work of a great many of the artists I encounter, but only a few of them really keep me coming back. Luckily for me, three such artists have solo exhibitions opening this month.

I have spent many (arguably too many) hours poring over these three painters and people’s ideas about their work, but I have to emphasise that you don’t have to do this for it to speak to you. I urge you to visit these exhibitions, look at the artworks and form your own conclusion on whether they are in that "special" 5% for you.

In case they are not, I have included below some honourable mentions for this month: 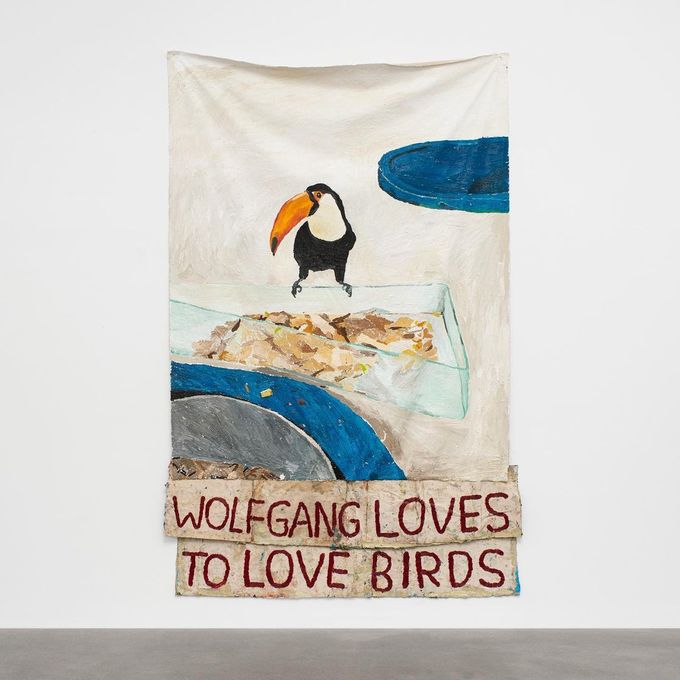 Wolfgang feeds Tukan Hovis and seed mix from the shop on the corner, 2021 by Sophie Barber (courtesy of the artist)

"Juicy" has to be one of my least favourite International Art English adjectives. People describe publications, auction prices or artists’ CVs as juicy. They also describe paintings as juicy. In the documentary The Price of Everything, collector Stefan Edlis explains that the Andy Warhol paintings that achieve the best prices are the "juicy" ones. To me, the word is evocative of something hyper-modern and strangely sexual. I could be wrong, and there are certainly notable exceptions (Jeff Koons comes to mind), but I can’t imagine any artist wanting their work to be called juicy. It makes me squirm.

However, that is the word that came to mind when I first saw Sophie Barber’s work last year at her Goldsmiths CCA solo exhibition. The paintings, either monumental or miniature in scale, were caked with inch-thick layers of oil paint. The small canvases were bulbous and the large, unstretched ones were given a new surface texture by globules of pigment. At the time, I remember watching a Zoom talk with the artist where she explained the process of standing on her tubes of paint to get the most out of them.

In this, her first solo exhibition with her new dealer Alison Jacques, the works come in a few intermediate sizes described by the artist as "TV-size, iPad-size, iPhone-size". At first glance the comparison between Barber’s 3D painting style and super-flat screens feels wrong. However, the naming schema is consistent with the general idea behind Barber’s work whereby the artist is at the centre of a world of imagery, picking and choosing which fleeting impression to – as the exhibition’s press release puts it – "paint into the world".

A pair of parrots, Kendrick Lamar, an artwork in an exhibition. Barber’s image-making procedure elevates her subjects, in the process flattening any perceived hierarchy among them. By virtue of their being turned into paintings (especially ones in Barber’s - sorry - juicy style), they are lifted above the fleeting treatment of imagery in the age of the internet. "High" and "low" culture are depicted with equal volumes of paint and presented as real things for the viewer to understand on their own terms in Barber’s own visual language. 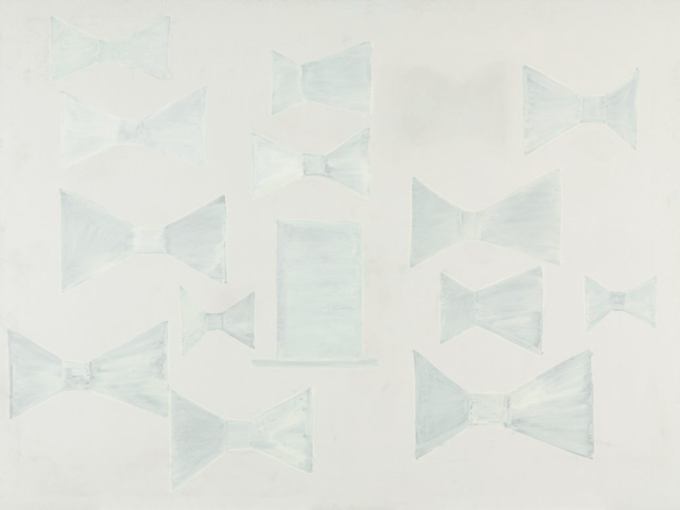 A sputter is a nonsensical series of sibilant and plosive sounds. An utterance is a spoken word or statement. Sputterance, a term coined by René Daniëls, is an oxymoronic combination of the two. How can an indeterminate noise be understood as speech?

In a slightly naïve style and often at large scale, Daniëls paints buildings that look like books, empty corridors that look like bowties, and art galleries that look like television sets. Sometimes, they are covered with scrawled words that don’t quite form sentences. Always, they threaten to give way to abstraction any minute – there is very little for the viewer to hang their hat on, so to speak.

Reading about the artist, the word ambiguity comes up time and time again. But this is not the kind of ambiguity whereby someone says (or paints) one thing and means another. It is more frustrating than that. Daniëls’ paintings feel like intense sputterances – at once, they say something of great importance and nothing at all. There is a sense of almost frenzied communication – something Daniëls is trying to spit out – but the paintings always stop short of making a determinate statement. I think Martin Herbert’s review of the artist’s 2011 exhibition at Camden Art Centre did a good job of capturing this feeling, describing a "sense of the artist trying to ram something massive and internal through a relatively tiny aperture in the real world."

For an upcoming show at our own gallery, a two-person exhibition featuring painters Amy Dury and Philip Maltman, I have been thinking a lot recently about art’s power to communicate. Is paint on canvas a tenable conduit for ideas to travel from one person’s brain to another’s? For Daniëls, paintings can certainly make noises, and not completely meaningless ones. But whether or not their parlance can go beyond the sputterance is still up for debate. 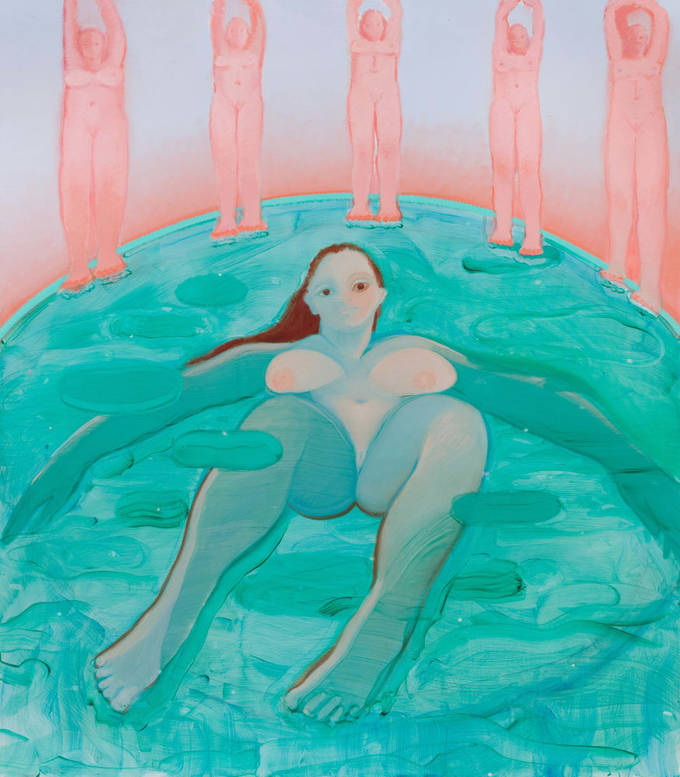 The characters in Sofia Mitsola’s paintings tend to have a far-away, vacant look in their eyes. Their faces, pensive and wistful, almost don’t match their bodies, which variously sprawl naked across the canvas, dance and metamorphose into animals.

In her second solo exhibition with Pilar Corias, these characters are part of a story about two ​​warrior sisters who inhabit a semi-aquatic world. Executing an exhibition like this – visual art’s analog of the musical world’s concept album – is an ambitious project. To create a captivating story from a room full of pictures requires a kind of clarity of thought and practice that evades many artists for their whole career. Mitsola, not three years after completing her MFA, navigates the task deftly.

Painted portraits of Aqua and Marina, the artist’s two protagonists, sit alongside a monumental charcoal frieze depicting a battle scene and smaller paintings of the sisters’ belongings to fully immerse the viewer in her story. She rejects the monster/hero binary that is so common in Greek mythology – and modern society – in favour of more realistic complex characters who can be both menacing and seductive, attractive and repulsive.

This exhibition brings to my mind a recent conversation with another artist, Liorah Tchiprout. Referencing her own work and Nettle Grellier's paintings, she spoke about the beauty and importance of female artists creating new worlds with their own systems of logic and value in their work. Imagining alternative possibilities for how the world might be different – even in the context of fantastical scenarios –can be a form of respite from and a seed of resistance towards our imperfect and unfair world. The paintings in this exhibition do this beautifully.