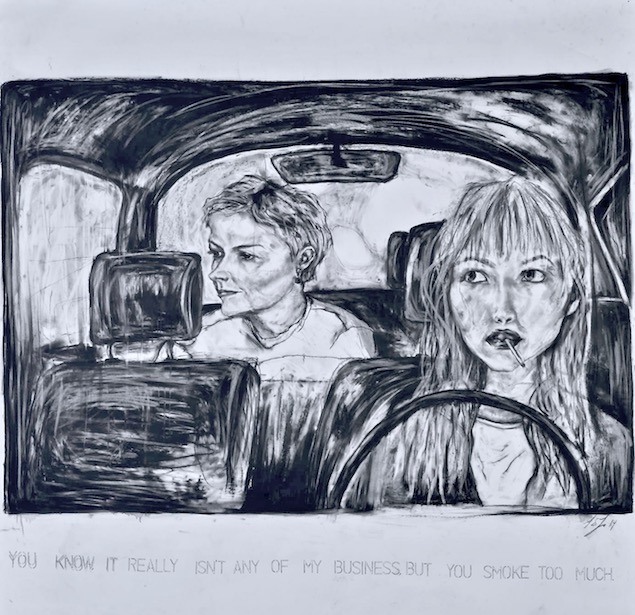 How would you describe your creative process?

I collect a lot of images, family photos, stock footage, random little screenshots of things I accumulate over time. I make the drawings not as an attempt to create a narrative, but to comprehend the narrative already taking place.

In your work we see lots of people and characters. Who are they?

A lot of my work is about my relationship with family. Picking apart the nuclear structure and its anxious crevasses. The piece, Occluding Edge, 2017, was an attempt to articulate this anxiety. I am still performing a critique of the ideological structure my parents have built around me. Although the people and spaces 'acting' in my drawings may be of this reality, they are playing a role. I call them authentic fictions. 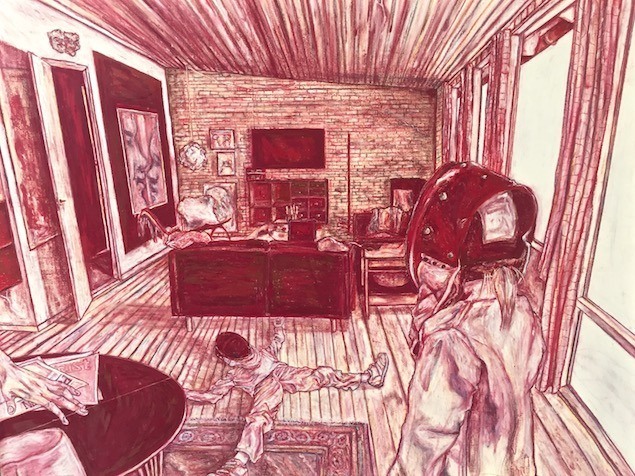 You have a very distinct style. How did you first arrive at this approach?

When I was little, there existed this kids’ show on Danish TV called 'Up in the Head', where the two hosts lived inside of the head of someone's dad, making decisions for him. The set design for this show was this vast play space, where anything could happen, but also like a construction site or very specific utilities and practical functions. I think of my drawings like that a lot. Like imagined set designs for unpacking historical or personal events.

When you draw, every mark is visible, splayed out. To me that is a recording of time. I think that this is why each piece is so large. It takes as long as it is big. In Cinema 1, Gilles Deleuze compares the cartoon with frame-by-frame moving image, describing drawing as not constituting a pose or a completed figure, but the description of a figure, always in the process of being shaped or dissolving through a movement of lines. That really stuck with me. 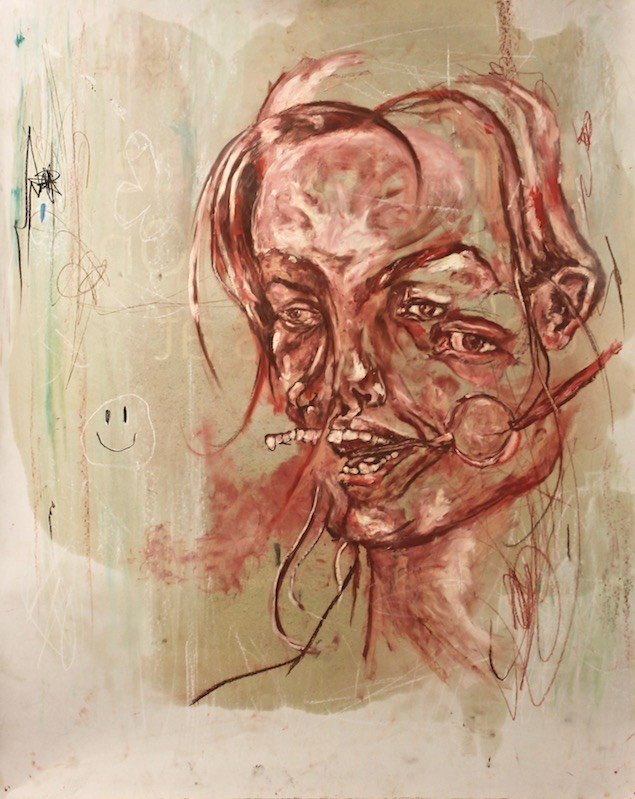 Besides your self-portraits, we also see characters from the mainstream media. What are you trying to express?

Movies and TV shows where the leading character has what can be described as ranging from a vivid imagination to schizophrenic tendencies always felt very familiar to me growing up, for example in the TV show Ally McBeal, where she imagines Al Green singing to her in her bed, or Edward Norton inventing Tyler Durden in Fight Club. My work has always been inhabited by authors, actors, filmmakers, musicians and philosophers, people who are looked to for guidance, like my elders or something. I can have long conversations with Simone De Beauvoir, Arthur Garfunkel or Al Green for that matter, in my head. Asking for advice. 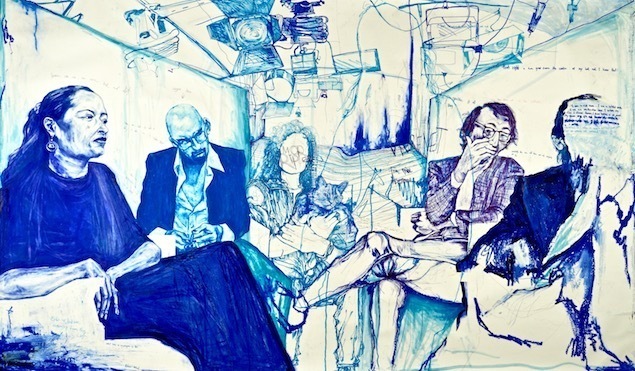 Each of your work tends to have a dominant colour and tone, how do you choose your colour palettes?

I never had a formal drawing or painting education per se, so everything I do is motivated by a combination of intuition and availability. A type of organized chaos – I accumulate things, but not in determined specified way, I'm not one of those artists who simply must work with a specific brand and hue of a rare ink, otherwise they simply cannot work. I'll draw on anything, with anything. You'll definitely see me pick up a pencil off the ground. Call it a concrete poetic process, or just plain laziness. The element of chance in my work is that I'll always try and work with what's there. I find immense pleasure in materializing a three course meal out of otherwise common fridge leftovers.

Pink is my favorite color. Much of my work has a very visceral, fleshy quality to them. As a fleshy suggestion of a room, fragmented, and consisting of soft tissue held together by stringy tendons with pulsating rhythm. I have a total obsession with abject, bodily, architectural spaces. Movies such as Zulawski's Possession or Cronenberg's Videodrome, have been influential for me. 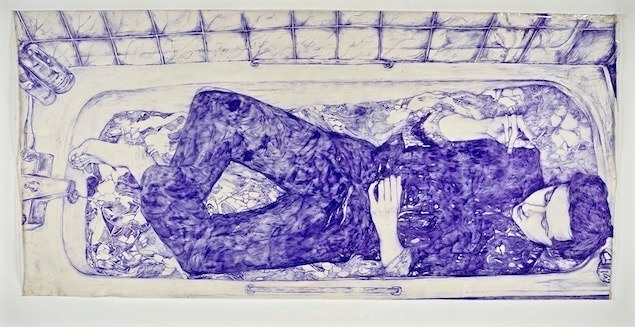 What was the key influence that led to the development of your artistic style?

Cartoons! I watched an insane amount of cartoons as a child. That's how I learned to speak English. Dexter's laboratory, or Cow and Chicken. Those cartoons had a very surreal edge to them, and I actually think they had a huge influence on me. But I think that the first show that really changed something for me in terms of choosing art as a means of expression was Danish artist Christian Lemmerz' 2010 show Genfærd/Ghost at Aros, Aarhus. The meeting with those otherworldly marble renderings of macabre, grandiose violence was very impactful for me at 17. It was an inaugural experience of being seen or something. 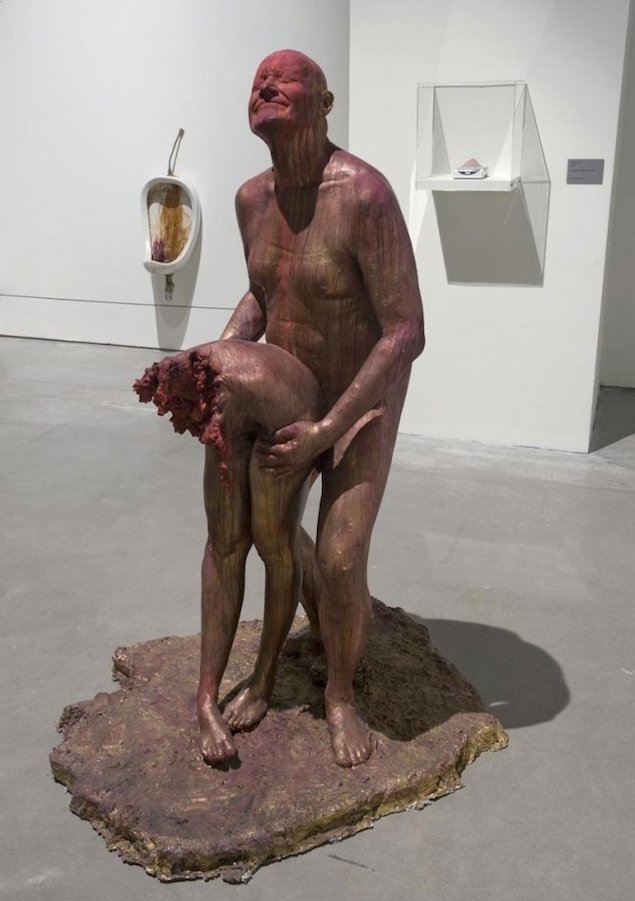 Christian Lemmerz: The Subconscious of the Dead Pope, 2005. Photo courtesy of ARoS/Ole Hein Pedersen and “kunsten.nu”.

What does art mean to you personally?

It's a translation apparatus. I think of many of my works as explanatory mind maps, or the emotional blueprint for a house. In the process of making, connections appear. Phenomenons, concepts, auto- and global historical events, and people become clearer and make more sense to me. Yet in doing so something entirely new unfolds that makes no sense to me, the object. The art object at face value makes little sense to me. I suspect It might take longer for me to approach an understanding or the art object beyond it being a commodity.

What's the most memorable experience in your lifetime?

Walking the entirety of the Shin-Etsu trail in Japan by myself, and nearly getting eaten by the venomous pit viper, the Mamushi snake. And then climbing Mount Fuji (twice) right after. Check my instagram for pictures to prove it! 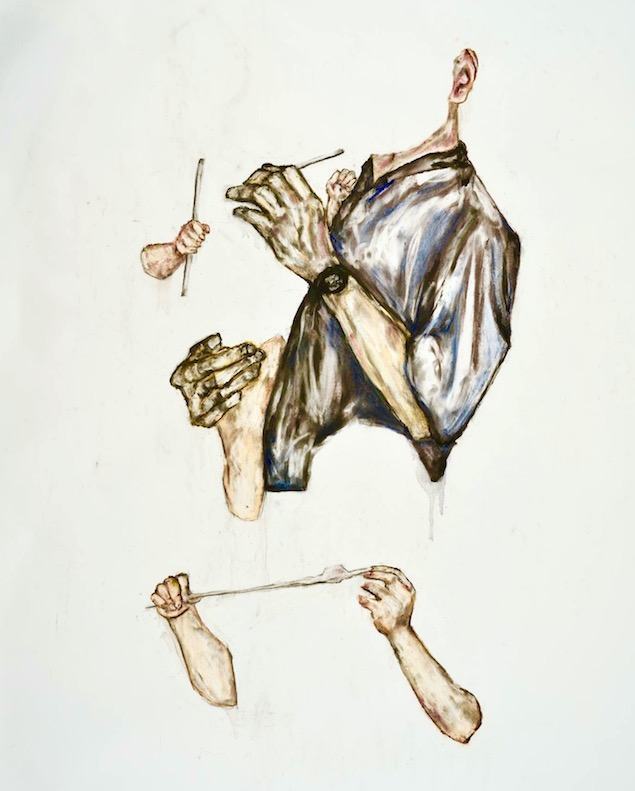 I'm currently working on a series of drawings reflecting on the past two years of my life: moving to America, having to leave grad school in New York and move back to Copenhagen to be in a recovery program, moving back to New York and staying there through a global pandemic. Themes of solitude and growth feeling pertinent to this upcoming work, stay tuned.

How has covid affected you and your art? Has your art and creative process helped you through this testing period?

I was working in my bedroom for a while. I think I had sort of a writer's block during my first year of grad school – I was interested in cinema, but not making any films, I had the compulsion to draw but felt like I couldn't justify my urges by the existence of the finished drawings. And I think that being 'grounded' made me regress a little into a development stage of 'teenagedom' that freed me up from my adult anxieties about needing to succeed and perform. Making art has become more free for me again, and I think it needs to be that in order to work.