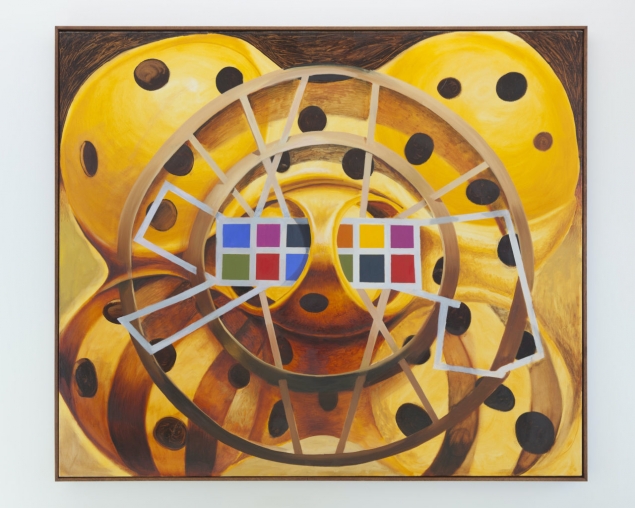 Kennington’s Gasworks is as much a global community centre as it is a gallery. The South London space hosts reading groups, performances, open studios and talks, as well as an acclaimed residency programme. Focussing on giving space to international artists, the Gasworks Studios have hosted Lisa Brice and Jordan Wolfson among others. Glasgow-based Lauren Gault spent her 2019 residency working on her first UK solo exhibition, now exhibited in the gallery downstairs.

The sculptures on show, almost invariably white in colour, examine our relationship with the world around us, tracking the imperceptible changes born of our engagement with our environment. In the main gallery, for example, we find two sculptures of leaping dogs. There is a 20% size difference between them, reflecting the fact that domesticated dogs are this much smaller than their original wild counterparts.

Throughout the exhibition, an ambient soundscape interweaving field recordings of humans and animals can be heard. There is an undeniable sinister edge to the works and this soundtrack makes this explicit, tying together Gault’s nods to the unintended and often invisible consequences of our interventions in the natural world. 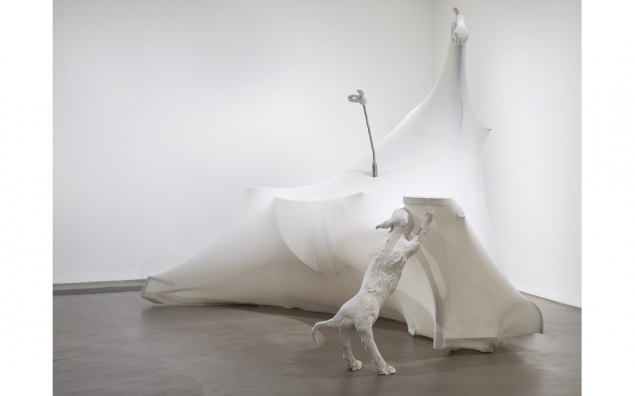 Across the river in Fitzrovia’s Josh Lilley Gallery is another debut London exhibition. Raised in New Jersey, Celeste Rapone completed her MFA in Chicago, where she has become a key figure in the local art scene. She is represented by forward-thinking gallery Corbett vs. Dempsey and lectures at the Art Institute where she studied.

The pinky-hued figures she paints are, she explains, imaginings of where she may end up if she fails as an artist. Swinging from a basketball hoop, crammed into a tight office cubicle, sitting red-eyed at a table in a bingo hall; Rapone’s characters reflect the “I’ll take anything” approach of the gig economy into which many would-be creatives are forced.

The artist carries this sense of confinement over to the physical, her figures often forced to crane their necks and bend their bodies impossibly to compete for space within the bounds of the canvas.

Arguably led by Oli Epp in the UK and Rapone in the USA, this use of figurative surrealism to reference the anxiety of everyday life under late capitalism has become popular among a generation of younger artists and collectors. Her first British solo show is set to be an important moment in this movement. 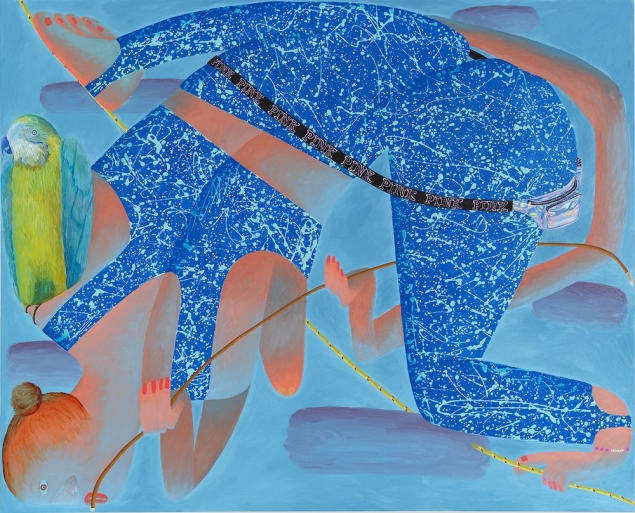 Will Cruickshank escapes the financial and physical confines of being an artist in the city by working from a studio comprised of three disused grain solos on an Essex farm. Instead of canvases and brushes from the art supplies shop, he works with homemade equipment crafted from bicycle wheels, buckets, pans and cement mixers.

His first solo exhibition with FOLD Gallery presents a collection of textile sculptures made with such equipment, and we can tell from its reference in the title that his studio and the materials found around it are the driving forces behind these works. He has explained his process as a relationship between himself, his equipment and his materials. Two partners in this relationship are guided by a singular leader. Unlike most artists, he admits that “often it doesn’t feel like it’s me”.

Cruickshank does not decide what he wants to create and then work out how to do it. The process is simultaneous, the materials and equipment acting as dominant partners in creative decision making. Rather than means to an end, in the Silo works, they lead the process of creation. 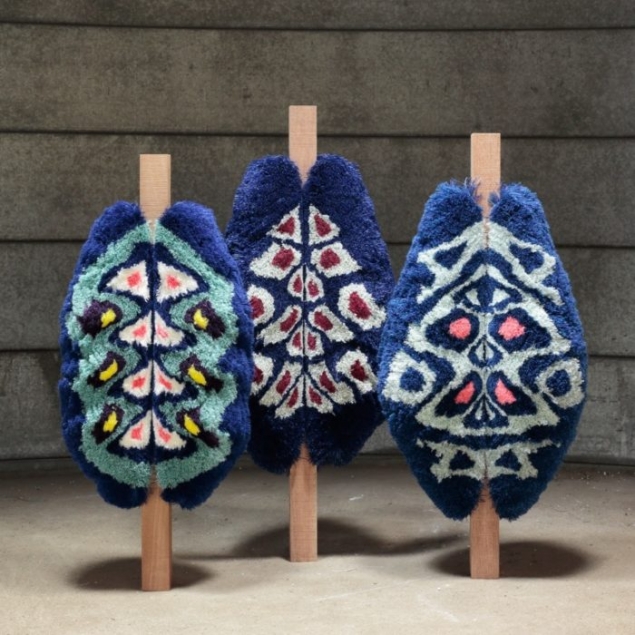 It only takes a cursory scroll through Royal Academy and Slade alumnus Sean Steadman’s Instagram page to understand the rich combination of disparate influences that the artist comes into contact with. Miro, Hodgkin, Velazquez and Raphael all get a tile. We see calligraphy from 800 AD next to an Alex Katz painting. Steadman seems to have seen and absorbed too much for his own work to be anything but a deliberate product of these encounters.

His recent abstract paintings have been likened to DIY counter-cultural artefacts; specifically, surfboard graphics and decorations from psytrance raves. This might owe largely to their creeping sense of movement and figuration that makes the viewer feel like they are looking not at a static abstract form but at a still from a film of a morphing, almost-human shape. This reading of his work is consistent with the move to abstraction his practice has seen since his more figurative Royal Academy degree show.

However, it seems more fun to look at Steadman’s work, through the lens of his many influences, as touching on a near infinite number of concealed reference points lifted from the last millennium of art history. On this view, he is a kind of machine with a mysterious method by which he turns the input we see on his Instagram page to the output we see on the walls of Project Native Informant. 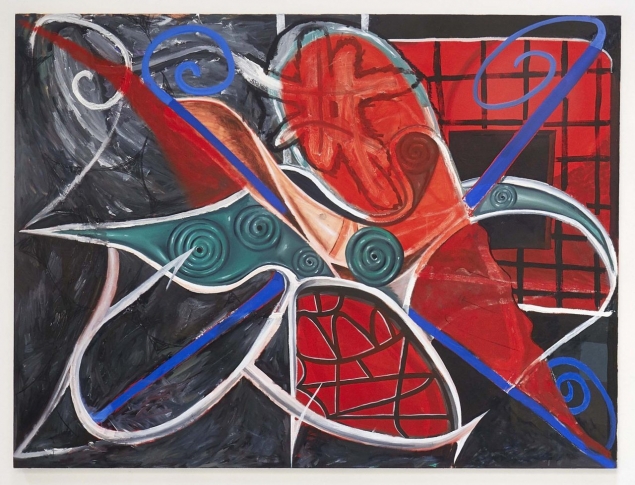