British artist Hush has made a name for himself in the urban art scene with his signature style of harmoniously intertwining collage, graffiti, stencil, painting and drawing to make beautiful, bold works in the studio and the streets. Using the traditional geisha from Japanese culture as his muse, Hush blends Street Art aesthetics with vibrant color and pattern to illustrate the beauty of the female form. We spoke with Hush about his laborious technique, his incessant travel, and his recent curatorial project in New York. Read on to find out more from one the most successful street artists on the scene right now. 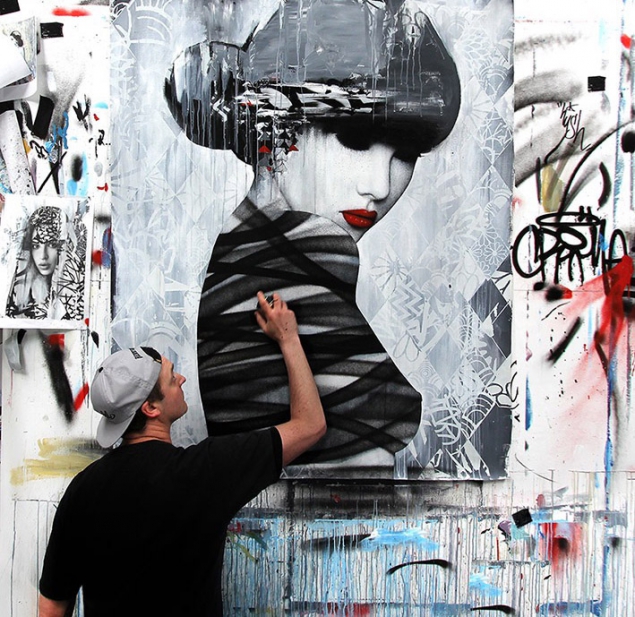 Tell us about a typical day in the studio

Well as all creatives know art is a sickness not necessarily a gift! So I wake early, grab a coffee as I drive to my studio. I usually land anywhere between 6.30am to 9.00am. My studio is a 2000sqft warehouse on a huge industrial site. I'm pretty much focused so catch up on mails, and make art all day everyday. I create a lot of work but only let the best out. When I post images on social media showing pictures of my studio people always comment about me standing on pieces, but I know they aren't going to make it so it turns into a HUSH flooring! I usually stay in the studio until 5 so I have a kind of work structure. When I'm painting a show or making an edition though I'm buzzed so usually stay in the studio around 12 hours a day, 6 days a week for months on end. Like I say it's a sickness! 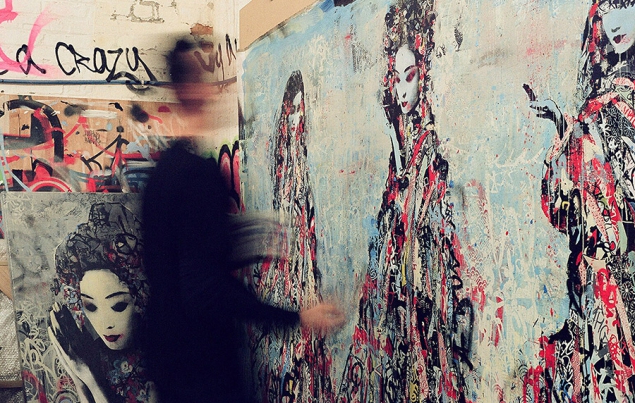 Your work is a mix of methods, from stencils and screen print to action painting. How did you come about this multi-faceted working method?

I'm very interested in technique and the complexity of how I make works and want to always take it further. Every new body of work I make I introduces new elements. It's almost like I'm making a new language and introducing new words to the story each time I approach a piece. A lot of my inspiration is a conversation from street aesthetic to studio practice and vice versa. Some marks can only be made on the street and when you try to replicate them in the studio it evolves into something different again. 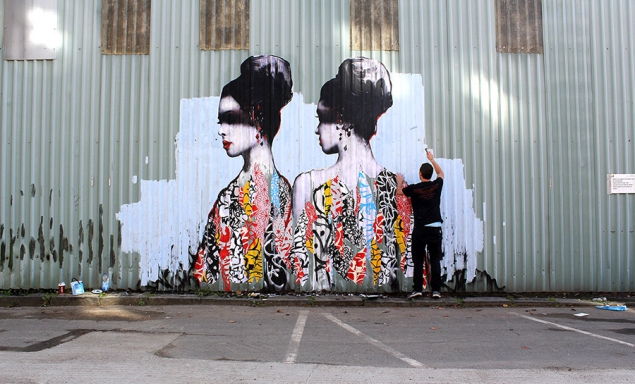 How does your studio work differ from street and commercial work?

When I'm making work on the street I'm not interested in it looking technically tight. It's got to be raw or a little brutal. I usually paint the street pieces in the studio on paper then rip it up and recreate it on the street by wheat pasting it back together and painting into it. The pieces I make in the studio are the exact opposite as I use the best materials and want to create something rich in complexity and aesthetic. 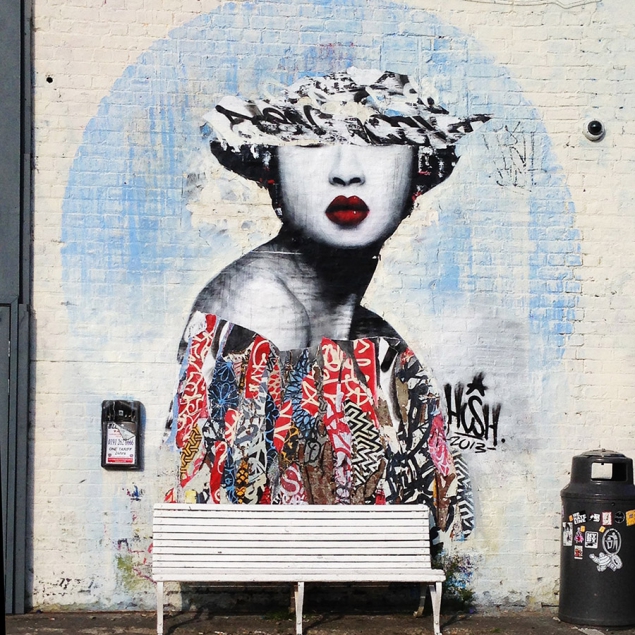 When did you make the jump from graphic design and illustration to fine art?

I studied illustration and design at art school for 5 years but was always the kid that could draw at school and did a bit of graf. I did everything after leaving, designed flyers in the Acid House party days, worked for ad agencies in London and Hong Kong. But always made art and was always interested in the street as an arena. By 2006 I was starting to get invited to do group shows and decided to focus on my passion. It was quite a natural progression and developed itself. 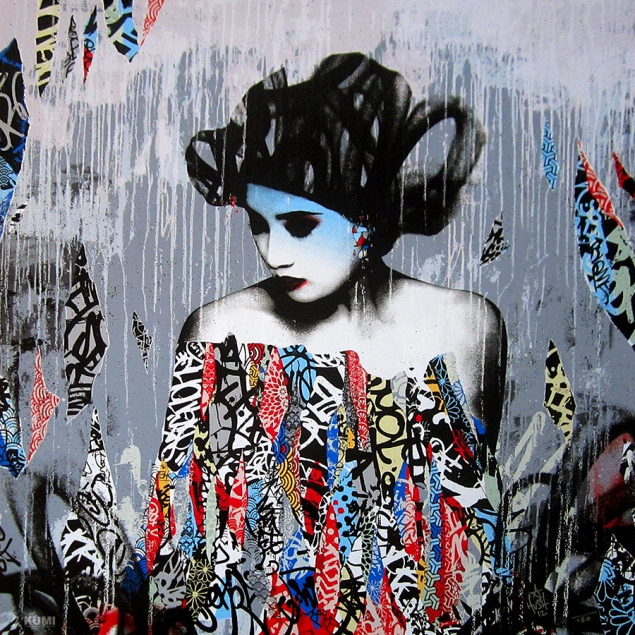 You’re from the UK, lived in Japan, and seem to be consistently circling the globe. How does travel - and varying cultures - affect your work method and influence your art work?

Travelling does have an influence on my work but really it affects me as a person. I feel very privileged that art allows both myself and my family to experience all the cultures, people and places around the world. It’s very humbling. 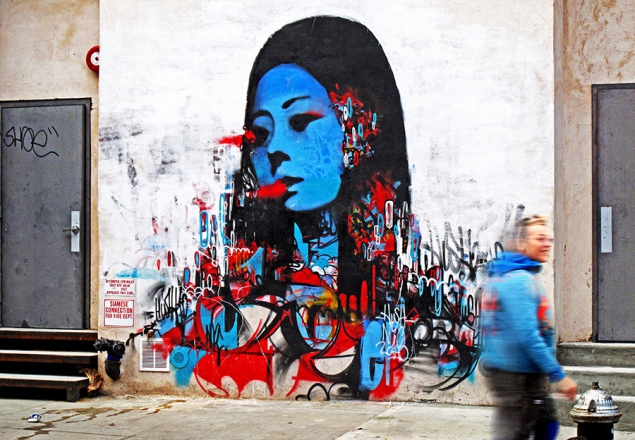 You’ve recently made your curatorial debut in New York at the epic Vandal restaurant - which also includes your own work. How did you choose the artists for this large-scale project?

VANDAL NEW YORK was amazing to work on. The guys who own the place really did give me free reign (well almost), but considering the investment in the place they were open to anything. The deciding factor for me was that I wanted to show a diverse, international street aesthetic: Handstyles, Graf, Paste up, Collage, Painting, Stencil work and sculpture. 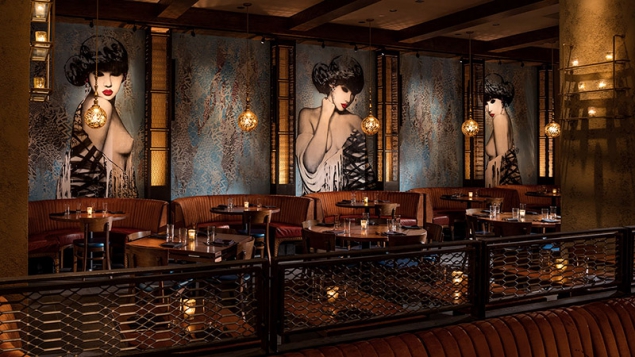 The murals in there where created by Vhils, Apexer, Shepard Fairey, Tristan Eaton, Will Barras, Eelus and of course me!  I also wanted to represent the scene on a whole, so bought limited edition works by Banksy, Kaws, Faile, JR, Eine, Renta, Swoon, Paul Insect, D-face to name a few. 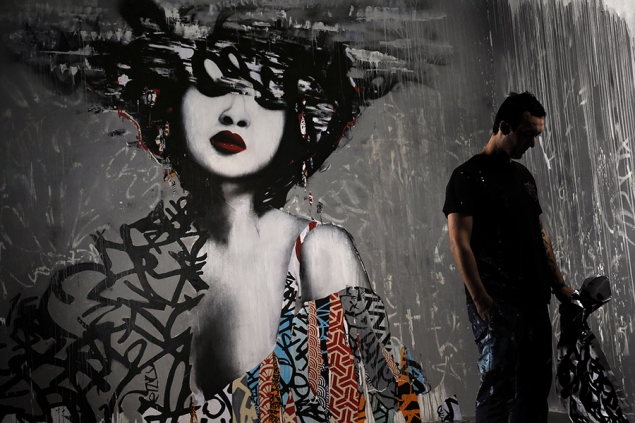 I read critical theory, and visit museums rather than galleries, I see enough online.

I like so many artists but at the minute I'm looking at works by a collective of painters from San Francisco:- Emilio Villalba, Justin Hopkins and Daniel Segrove, I’m really into Cy Twombly and Harland Miller.  Also Conor Harrington’s new works along with Anthony Micallef and Retna. 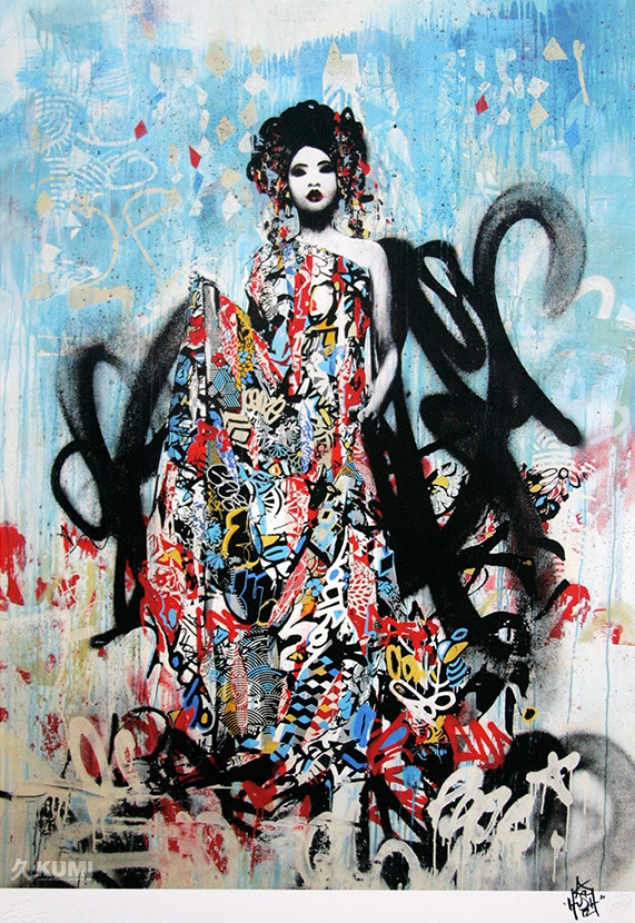 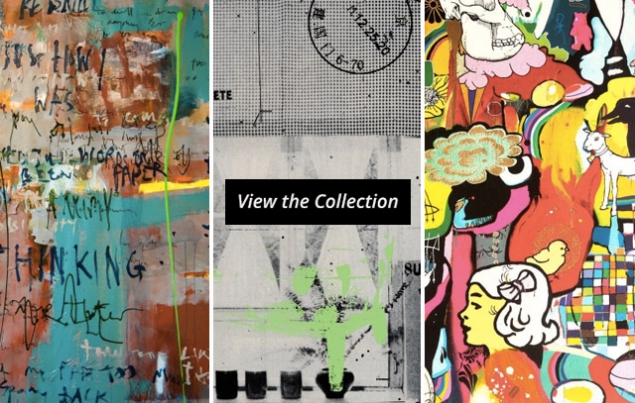 Street art doesn't have to stay on the streets. With some of the most exciting new art coming from the urban scene, now is the time to invest in these edgy pieces with a distinctly contemporary feel. Bring the look home with our curated collection of street art picks to covet.