Posted in Inside Scoop by Isabel Larner on 20th June 2014

This week in Art Speak, we look at one of the oldest and most important disciplines in the world, and how it has been appropriated and reinterpreted by artists: cartography, or the art of map-making.

How many miles away from our intended destinations would we be without the ability to load up a SatNav? How would we navigate the muddled and confusing streets of London without Google Maps to lend a helping hand? Most of us would be hopelessly lost without the help of these interactive and dynamic ways of navigation. However, both are descended from a much older discipline.
Cartography, the art and science of map-making, is one of the oldest and most important professions in the world. From the exquisitely drawn to the scientifically comprehensive, maps have been a way to not only situate ourselves in our world, but expand our concept of it beyond that which we can see with the naked eye. Thanks to cartography, we are able to better comprehend how the world lives in lands beyond our own - or even comprehend that there are any at all.
However, it often is our world that is depicted in maps! We usually depict the information that is most significant to us (a process called ‘generalization’: streamlining the map to only relevant information). Most maps are distorted in this manner - for example outlining political boundaries, distorting the size of countries, or even warping the distance between locations (you may be surprised just how close some London underground stations actually are, or for the peripheral stations, how far they are).
What information you choose to include or omit is a necessary evil, especially given that maps must be translated from 3-D to 2-D. Regardless, it speaks volumes about the intentions or agenda of whoever commissioned the map to see what information has been chosen, and to what extent it is distorted. One of the biggest problems in cartography is how our perception of the world can be so strongly influenced by the maps we most frequently see.
In art, this concern with how cartography reflects and reinterprets the world around us is used quite pointedly. There is often a focus on abstract traits such as historical events, cultural idiosyncrasies and social commentary of the area depicted.
We have picked out some of our favourite cartographic artworks to discuss what, to us, makes them so intriguing… 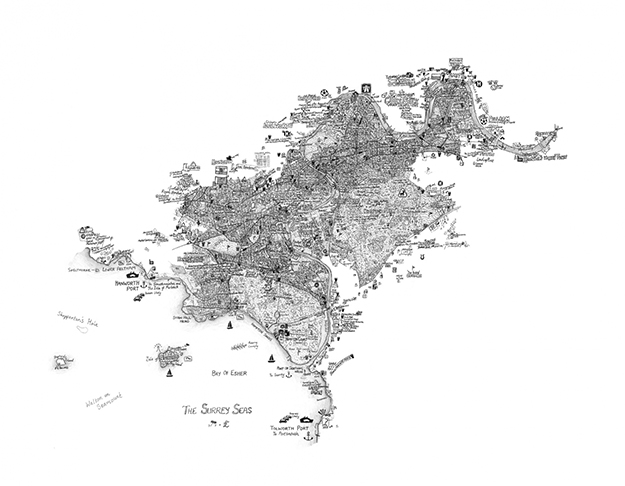 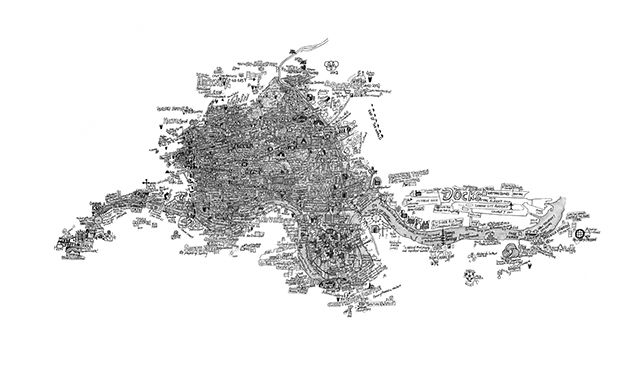 From a social perspective we may think of maps, with their superficial labelling, as quite informationally bare. Though we may learn how to get from A to B, we remain ignorant of the rich history that may be hiding under the surface. Stephen Walter has taken various slices out of London and annotated to the brim within their boundaries. Each image references various trivia about the area, backed both by public knowledge and personal experience. 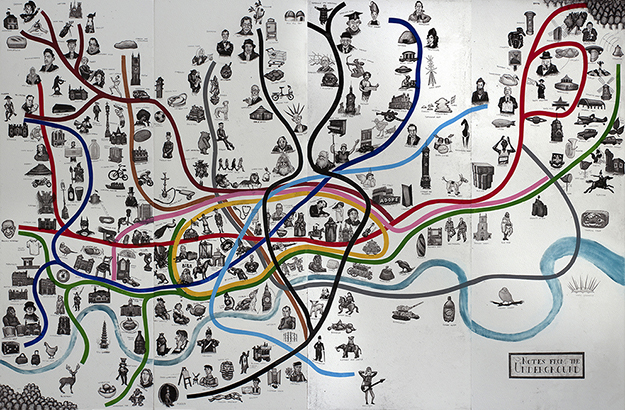 Notes From The Underground
Mychael Baratt
Reminiscent of an ancient folding map and littered with cultural iconography, the title of this work couldn’t be more appropriate. Using the easily recognised though geographically incorrect tube map as a framework,  ‘Notes from the Underground’ puts emphasis on how the rich cultural history of the capital is just as important as its physical foundations in constructing our idea of ‘London’. 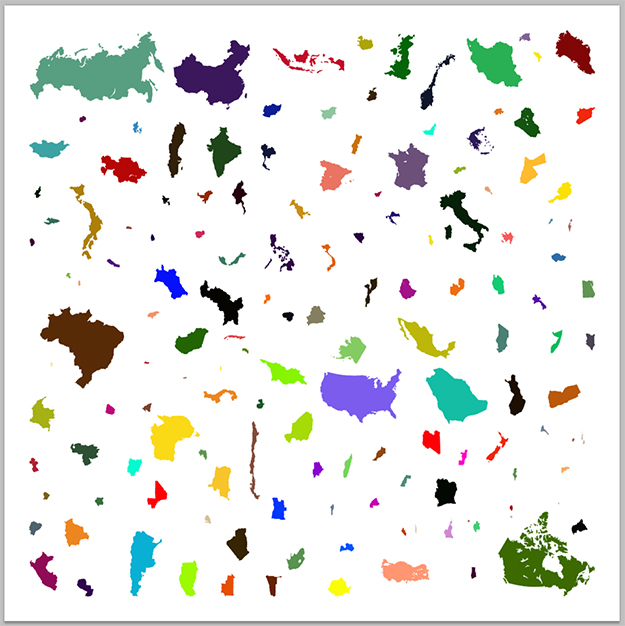 One World, One Dream

With the counties of the world broken up from their usual ties and recognised only by their outlines, this world map by Cai Yuan seems to level the playing field within international politics. The title could be seen as a reference to the Beijing 2008 Summer Olympics tagline with tongue firmly in cheek, playing on the irony of the message given the evident disparities between countries of the world, and perhaps even more profound given the controversies regarding human rights surrounding the event. 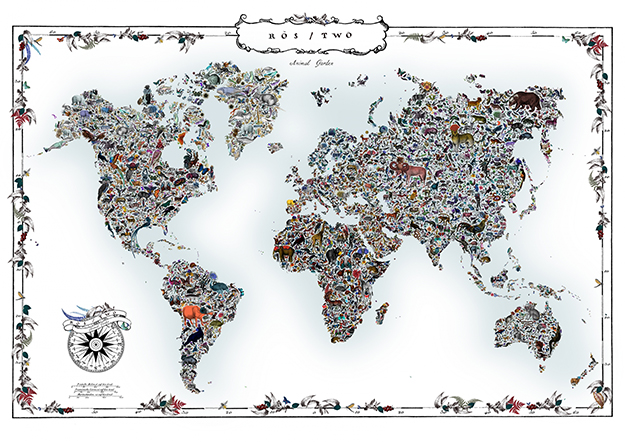 Icelandic-born artist Kristjana S. Williams elevates maps from the sterile to the striking. In Ros Two Animal Garden, the world is transformed into a patchwork of fauna fused with flora. We are reminded of the sophistication of the natural world that is usually reduced in maps to its geography. The detail in this image is immense, allowing the viewer to become lost for hours. 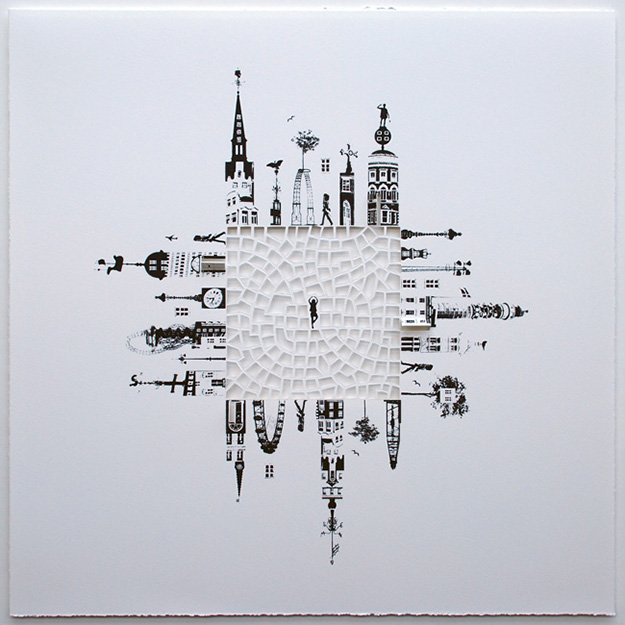 Louis Kirkebjerg Nielsen combines papercutting and screenprinting to explore the theme of journeying and exploration. In Story Box, a figure stands in the middle of a box surrounded by landmarks and imagery that the artist took herself around London. The figure is caught in motion, ready to embark down any number of the paths that Louiz has carved towards the various destinations. Distance is not the issue it may be in reality, with the landmarks lined up next to each other into easily accessible locations. 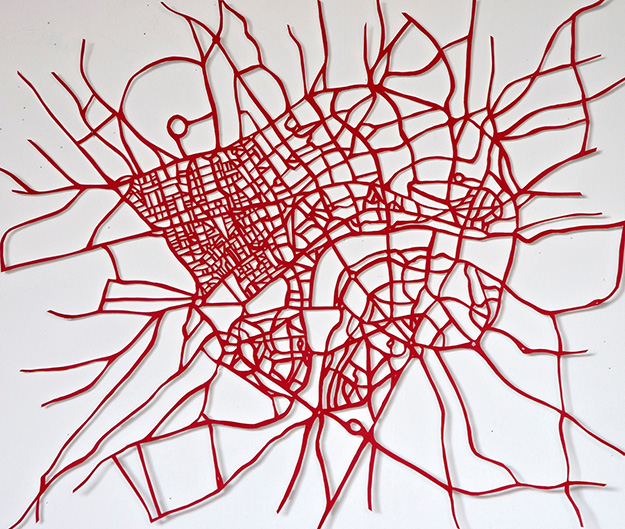 Inspired by the resourcefulness she witnessed in China, Susan Stockwell recycles everyday objects to comment on issues of ecology, geo-politics and global commerce. Red Road Arteries is a screenprint and papercut that details an area of south London where Susan used to live. Sharing her daily commutes reveals her personal memories of a public area, depicting not only the routes that characterise the area by also helped build her identity.
If you enjoyed this week's Art Speak and want to stay informed of more great art and design, take our ART STYLE QUIZ and BECOME A MEMBER. It is free and you'll get access to the best new art from top Museums, Galleries and Artists.
Share this article 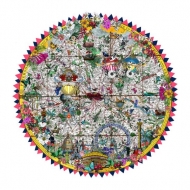 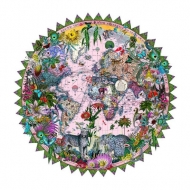 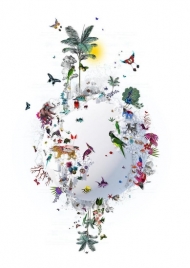 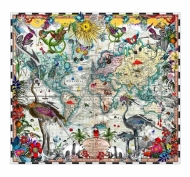 Navigators' Tracks & Discoveries of the World by Kristjana S Williams