We spoke to the founder of Serial Optimist David Dean about the site, his inspiration and his tips for budding bloggers. 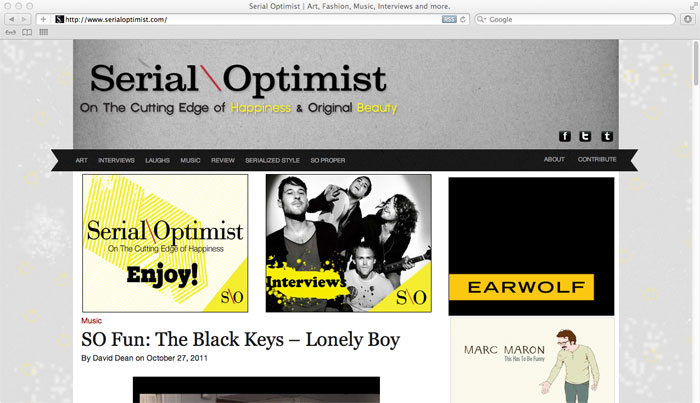 What made you decide to start a web magazine, how did it come about?
I lived in Vail, CO for three years after college, and started a super basic online platform to feature artists I liked called Streetwater Gallery. That lasted for about two years, and I was able to have throw some cool art shows, have a clothing line, and most importantly promote the work of artists I really enjoyed. When that ended and I moved to Dallas, I knew it was something I eventually wanted to get back to, but I wanted to make sure I had much more experience with online and new media, and that the time was right.
About two years I had the idea of starting a site that would promote positivity and smiles, and came up with Serial Optimist. From the beginning I knew I would feature art, fashion, and fun interviews with comedians I loved. After the first few months, the interviews really started coming in, and I developed my niche, which was to be enthusiastic and fun, and make people smile everyday; whether that came from cool artist features, funny comedian interviews, or a song I loved.
We really love the diversity of articles on the website, from art to comedy. Is it something you did very purposefully? or did it just kind of come about?
I'm a big comedy nerd. Love it. I'm also a huge fan of art and creative ideas. The only thing I did very purposefully was make sure to have interviews that were different, and that I only interviewed people I was a true fan of. That was tough at first but with luck I kept getting more and more. A lot of people ask about the "theme" of Serial Optimist, and I guess the best I can do is compare it to a late night talk show, like Letterman or Fallon, in that they don't have exact "themes". One night they might feature and actor, a chef, and a comedian, the next night an author, funny pet tricks, and a musician. The theme is just fun. That was my original idea. That I didn't have to stick to exactly one thing ie: art/comedy/music/fashion, that I could just do it all but keep it focused to originality and smiles.
Whats your favourite thing on Serial Optimist and why?
Man that's tough. Some of the interviews strike real close to home. The Rob Riggle interview is one of my favorites, the Jen Kirkman and Matt Braunger interviews will always be favorites because they both were some of my first and best ones, and they both went on to help me get other great people to do interviews. The artist feature of Claudio Parentela is one of my all time favorites because he has the cutest and most out there answers you will ever read, it always makes me laugh in a sincere way. 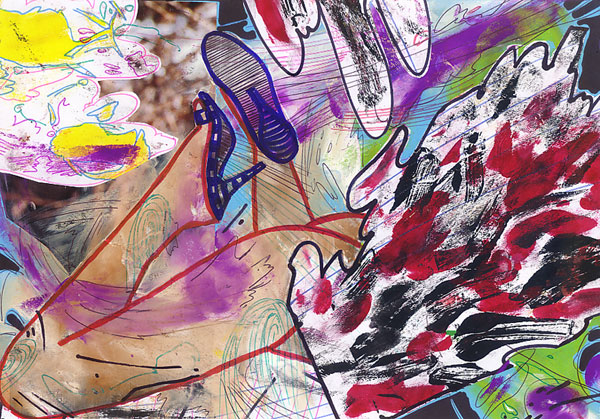 The artwork of Claudio Parentela.
Finally, what would you suggest to people who are thinking about doing a similar thing?
I would suggest making sure you know it will take a solid year of hard work if you want this to be something more than just a hobby. Make sure you stay true to your voice. Content is everything. Do your best to come up with your own ideas, and most importantly, do it because it's fun for you, do it as if you are doing it just for yourself.
Be sure to check out the site, and follow them on Facebook and Twitter