Andy Gotts MBE is an English photographer based in London. Andy’s unique style captures very private moments in time. His method is highly unusual in that he travels the world to photograph his subjects in their own home where they are most relaxed.

He shoots completely alone allowing him to create the privacy and intimacy required to capture his subject in ways that are truly unseen. To satisfy his desire to be true to his art form and document accurately what is in front of the lens none…Show more of his subjects are ever retouched after the shutter release has been activated.

Andy received the prestigious Fox Talbot Award. In 2012 Andy was appointed MBE by Her Majesty Queen Elizabeth II and is one of the very few photographers to have been recognised by the Queen.

He is currently exhibiting in Hamburg after completing a successful exhibition with Terry O’Neill & Douglas Kirkland and an upcoming exhibition at The Chelsea Design Centre in London.Show less

Stay in Touch with Andy!

Follow Andy to be notified of new works for sale and the latest updates on events and activities.

Andy Gotts is featured in 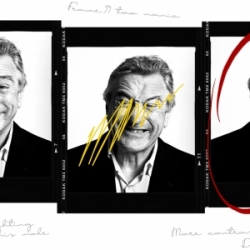 Revealing the Unseen with Andy Gotts