After a short break, Rise Art’s physical exhibition programme is back. This July, we taking residence at 67 Great Titchfield Street (W1W 7PT) for a solo exhibition with South African artist Nelson Makamo. The opening reception on the 21st is open to all, and the show will run until the 25th of August. If you are coming to London for the exhibition, I’d recommend making a trip of it and visiting the three nearby galleries below too. 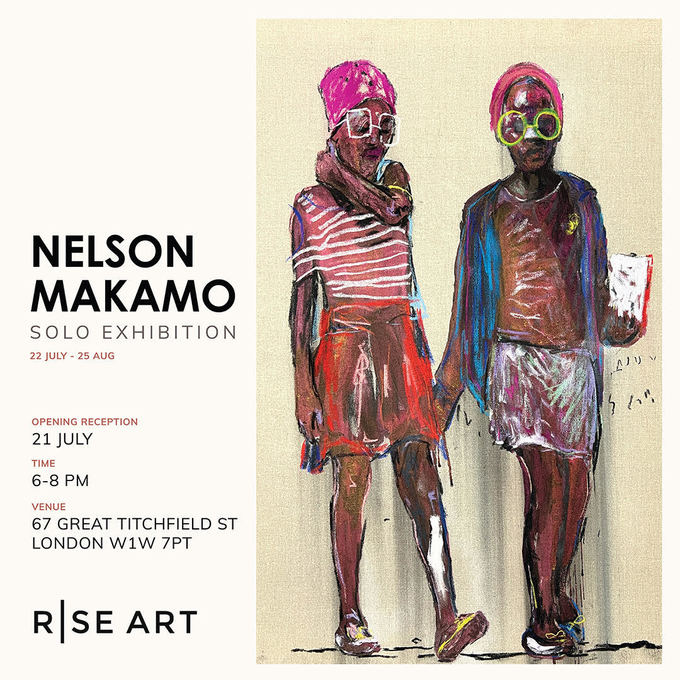 A lot has happened for South African artist Nelson Makamo since his last UK solo exhibition, more than five years ago. Outside of the studio, he has continued to grow his following, with exhibitions and admirers all over the world. Inside the studio, his work has been changing. This exhibition, alongside the artist’s recognisable solo portraits, features many works featuring his characters in situ, as members of a wider community. There are groups of laughing schoolchildren, busy street scenes and other displays of togetherness. By placing them in social situations, Makamo gives his subjects context, which brings a new level of detail to his world: the spaces that they occupy, the clothes that they wear, the company that they keep and the way that they look (or don’t look) at their companions all bring depth and complexity to his characters.

With these new contexts, the emotional intensity of Makamo’s work has not disappeared. Many of the faces in this exhibition - their owners engaged in social activities - contain all the emotional intensity of his early drawings. Momentarily these faces hover above their surroundings, their innermost essences exposed. They are both members of social groups and wider contexts and overwhelmingly individual. They are alone, together. 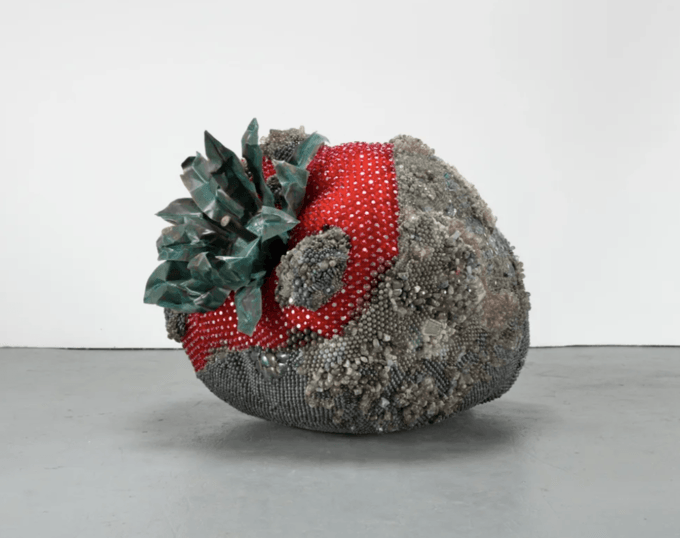 I first came across Kathleen Ryan’s work when I saw her last solo exhibition at Josh Lilley back in 2018. I was especially drawn in by three works entitled Fool’s Mould, Sour Pearls and Semi-Precious Bone - all sculptures of mouldy lemons made from jewels in shades of yellow, white and green pinned onto foam. These works were beautiful, funny, intelligent and memorable. The exhibition’s press release described them as “elegiac, strong memento mori” and, after Googling three of those words, I agreed. Judging by the number of times I have seen Ryan’s lemons around town since - at Frieze, in the Whitechapel gallery and most recently on posters for the Royal Academy Summer Exhibition - I wasn’t the only one.

It would be for an artist in Ryan’s position to begin phoning it in at this point: she has found a specific type of work that is intuitively impressive, that people want to see. I’m sure she could get a team of assistants bejewelling oversized fruits around the clock, and have collectors queuing around the block for them. What impresses me about this exhibition is the development - both in execution and in ideas - that it shows. She is working with similar media, ideas and subjects but on a bigger physical and conceptual scale. Alone on the lower level basement are two seven-foot slices of cantaloupe, laying overlapped like two lovers, slices of a car’s bonnet for skin and rotting flesh made from 18 different types of stone. Elsewhere, spiders’ webs made of quartz adorn other assorted car parts. Along with the familiar theme of beauty and decay, a tension between fast and slow is present in the exhibition. The varying paces of industrial production, fruit rotting, a moving car and the formation of crystals seem

A Thing for the Mind, Timothy Taylor 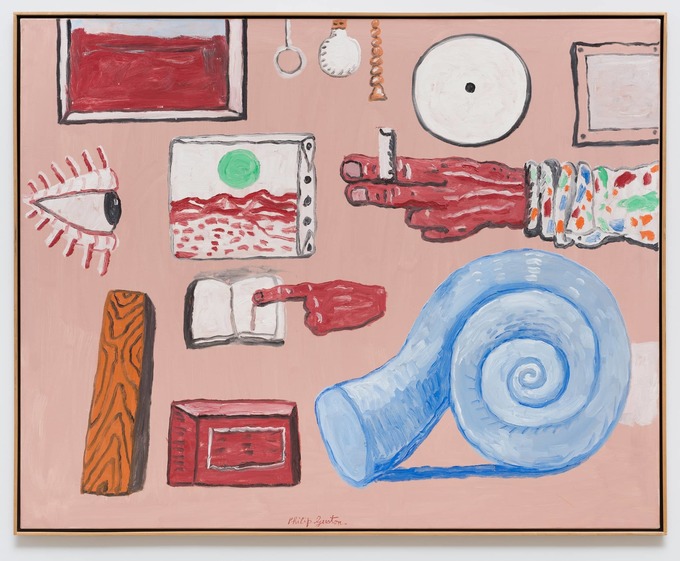 I can count 13 images, mostly unrelated to each other, in Philip Guston’s 1978 painting Story. Among them are a lightbulb, a painting (within a painting) of a green sun setting over some mountains, a pink hand holding a cigarette between its sausage fingers and some kind of blue tube, rolled into a circle. This work sits at the heart of Timothy Taylor’s latest group exhibition, the artists on show representing Guston’s influence on art today. The exhibition’s text describes Philip Guston’s world as a “muddled dreamscape”, an assessment which feels at least as fitting for the artists in this exhibition as it was for him when he painted Story almost 50 years ago.

Guston’s work is equally relevant, and bears marks on the work of different artists for different reasons. Formally, many believe his painting style moved the goalposts for figurative painters everywhere. His graphic, cartoonish, exaggerated style set (or perhaps reinforced) the precedent that painting doesn’t have to be elegant, refined or even painterly. George Condo and Carroll Dunham are two painters who ran with this precedent and who continue to create graphic figurative works that feel honest on a level beyond realism. And it’s just not his style; the sarcastic, contrarian voice that comes through in Guston’s work is present in this exhibition too. Woody de Othello’s fleshy, off-balance ceramic sculptures of oversized household goods have the same sense of humour.

It can be a bad idea to position one artist (especially a white, male artist) as the originator of a way of making or thinking about art, or even a style or motif. The reality is almost always much more muddled than the narrative that art history applies to it. However, keeping this caveat in mind, I always enjoy exhibitions like this one that unpack how one artist or artwork can have a ripple effect, its influence extending far and wide. Whether the story is fictional or not is a question for another day.

Andrew Cranston, If you see something that doesn’t look right, Modern Art 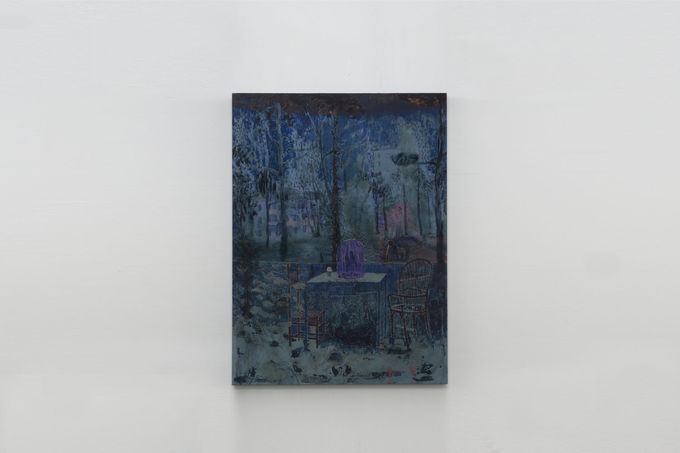 Weird Light, 2022 by Andrew Cranston. Courtesy of the artist and Modern Art.

Andrew Cranston’s paintings contain a naïvety that is difficult to properly explain. Stephanie Burt did a good job in 2021 when she said that we can see in them “the pleasure, the play, and the work of finding what might be out there in the world”. The feeling of curiosity that his pictures evoke is reinforced by the fact that he often paints them on book covers, as if his characters are just on the precipice of the stories that they contain.

Since opening just over a year ago, Modern Art’s Mayfair gallery has already hosted exhibitions by some of my favourite artists - Rene Daniels, Sanya Kantarovsky and Camille Blatrix to name a few. This is Cranston’s first exhibition with the gallery since they announced their partnership, and I hope it is the first of many.