Turning it into a community centre, installing a production line to destroy the artist’s belongings, completely emptying the space, leaving a bare room: there are plenty of non-standard ways to mount an exhibition in a gallery. Perhaps not quite as novel as the above, the four exhibitions I have written about this month have made me think about space in different ways: Shilpa Gupta adds weight to her words by having physical objects carry them. Hot Desque have devised a film that turns into a group exhibition. Sikelela Owen challenges the artist/viewer boundary by jettisoning her canvas and painting directly onto the wall. And at our gallery, each large-scale painting is orbited by a satellite work. 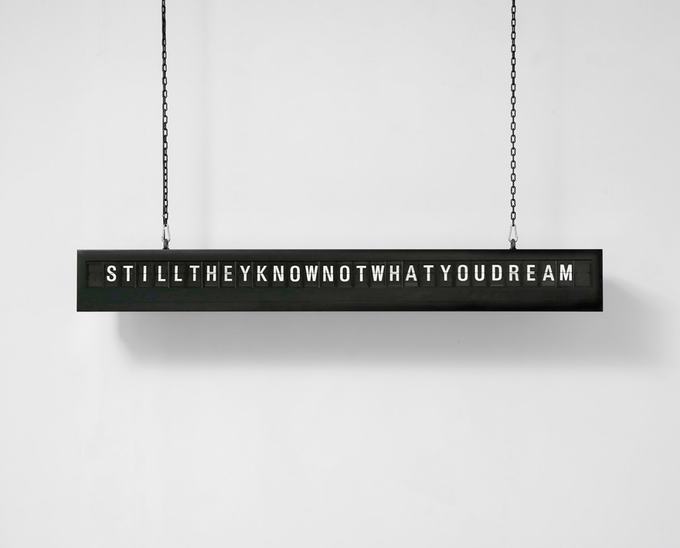 WeAreCloserThanYouEverImagined, 2020 by Shilpa Gupta (courtesy of the artist and Frith Street Gallery)

Shilpa Gupta’s installation For, In Your Tongue, I Cannot Fit (2017–18), which is currently on show at the Barbican’s Curve Gallery consists of 100 microphones dangling from the ceiling, each one above a piece of paper impaled on a metal spike. The microphones, rewired to work as speakers, play recordings of people reading the words on their respective sheets of paper. All of the passages were written by poets who have been incarcerated for their work or beliefs. In Gupta’s words, the microphone  becomes a symbol of the “fragility and vulnerability of our right to freedom of expression today”.

The artist’s sculptures, installations and durational works often use otherwise innocuous objects to amplify ideas and messages. The most arresting piece in this exhibition of new works that runs alongside the Barbican show is WeAreCloserThanYouEverImagined (2020). A flapboard (a new word for me, apparently the official name for those noisily flicking black and white signs that showed arrivals and departures at train stations and airports before they were replaced with screens) displays various cryptic comments on relationships and politics. Every five seconds or so the gallery fills with the sound of whirring and clicking and the old set of words is replaced by a new one: “you are being watched”, “as we fall in love”, “wash your hands”.

The slow, rhythmic pace, sound and physical heft of the flapboard draw special attention to the words it displays. Like the words of the poets being recited across town in the Barbican, they become part of an embodied experience that you can’t help but pay full attention to. 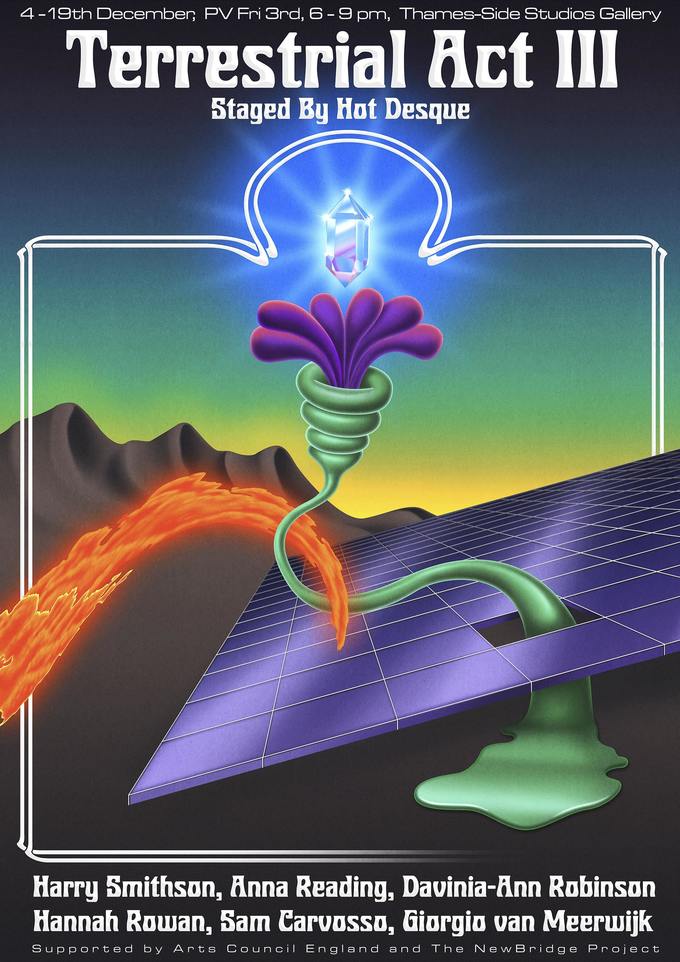 At the centre of curatorial platform Hot Desque’s latest project is a group of sculptures by six artists. Its outputs are various: a theatre performance, a film, a publication and, now in London after a brief tour of the UK, an exhibition. Produced to coincide with the United Nations Climate Change Conference in Glasgow, it focuses on our uneasy relationship with the natural world as participants in capitalism.

The video, set on the stage of an empty Theatre Royal in Newcastle, feels like a dystopian remake of The Clangers. In the dark, smokey space the sculptures subtly come alive to an eerie ambient soundtrack. The combination of the natural and the manmade is jarring. The plastic pipes transporting an unknown liquid around Hannah Rowan’s sculpture seem offputtingly clinical whilst the dewey leaves growing from Davinia-Ann Robinson’s casts of her own thumbs, by comparison, make the space feel stuffy and smelly.

I have never seen art presented in this way before, but in many ways it is a natural progression from the standard gallery setup. By directing the viewer’s attention using moving image, Hot Desque make a message that might only be alluded to in a normal exhibition clear and poignant. I love walking around a room full of art whilst reading the gallery text off of an A4 sheet, but I don’t think that experience could bring about the feelings - ranging from mild anxiety to outright despair - that the film does. With that being said, and now that I have an understanding of the works in the context of this project, I am looking forward to seeing the stars of the show at Thames-Side this month. 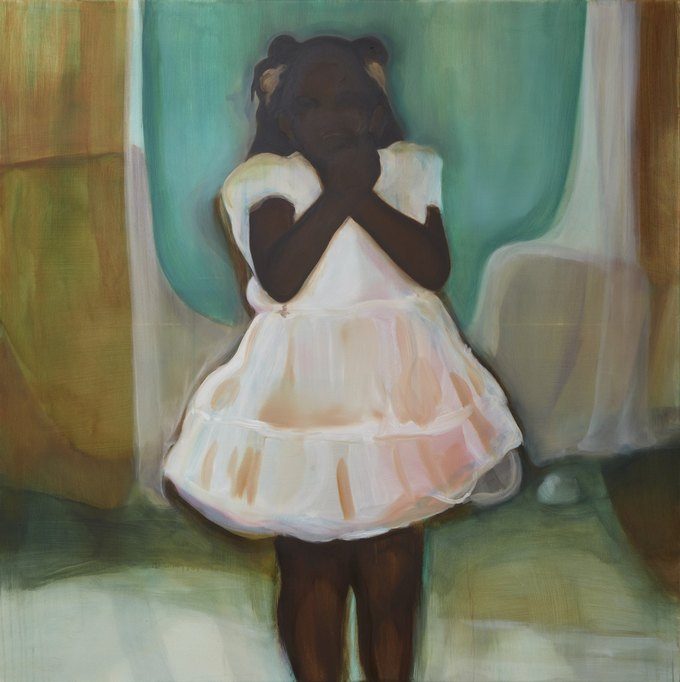 The figures in Sikelela Owen’s paintings tend to be slightly indeterminate. Rendered in thin layers of oil paint, their faces are washed out and obscured. Characters who lack clearly defined features normally range from uncanny to terrifying. But in Owen’s hands (unlike those of, say, Francis Bacon or Marlene Dumas), their representations feel intimate, tender and sweet. This semi-autobiographical exhibition features images of familial love: a father laying asleep with his daughter, children huddled together on the sofa in their pyjamas, lovers embracing in a hammock.

This isn’t to say that these paintings don’t contain allusions to the grand and even to the divine. In Me and Eli, a self portrait of the artist holding her baby, a gold circle is placed too perfectly behind her head for it not to be a reference to the Madonna and child. Neither are they all straightforwardly happy. Lack of clear mouths and eyes notwithstanding, Owen’s characters sometimes look wistful, sometimes grumpy. Both the candid images of domestic bliss and the more complex works (be that in terms of their reference points or the emotions they portray) are authentic representations of a real life. On one wall of the gallery, the hammock scene is painted directly onto the gallery’s wall. The conspicuously absent canvas feels like a symbolic removal of the mediating screen between the life represented in these paintings and their viewer. 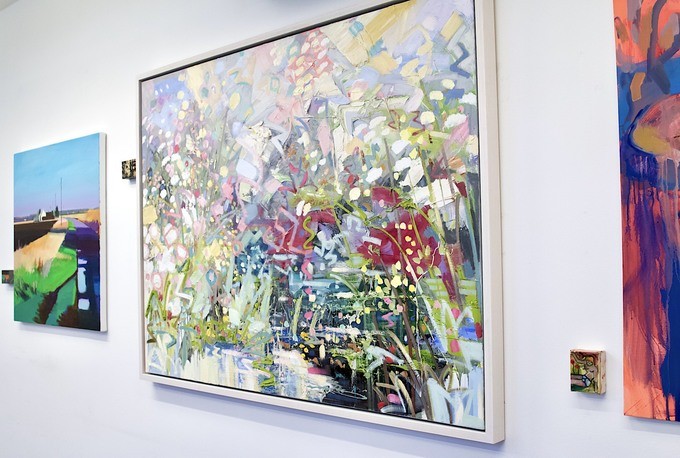 Artworks by Fred Ingrams, Paul Treasure and Gavin Dobson in the Satellites exhibition

This exhibition, the latest in our Soho gallery space, is about how context and relationality can impact our experience of art as viewers. A large work each by ten of my favourite artists from the platform is hung alongside a “satellite” piece, measuring no more than 10 x 10cm. The pairs all differ in scale and many also do in colour, subject, medium and style. Hung together, they engage in a dialogue where each work counterpoints the other.

Paintings by old favourites like Gina Parr and Day Bowman sit alongside those by newer additions to our roster including Guy Shoham and Clare Thatcher, each accompanied - orbited - by a tiny piece made especially for the show. My hope is that each work, in its similarity or in its difference, reveals something new about its partner.