I have spent a lot of the last month working on the exhibition currently on show at our gallery in Soho. I chose Amy Dury and Philip Maltman for this, our first two-person exhibition, because I saw an intense personal quality in both of their work. Their paintings revealed more about the artists and artworks themselves than their subjects. As Dury simply puts it, “it is always about you."

As I read and spoke with people about this idea, I found that it could be applied not only to Dury and Maltman, not only to painting, but to most artists and artworks. Artists don’t take on the project of representing things in the world as they really are - they are showing us their versions of these things.

This idea - that art transforms its subjects through the imagination and hands of artists - turned from a thought about two specific artists to a lens through which I have been viewing all art. What is this artist showing me, and how are they changing their subject in that act of showing? Below are four exhibitions to see this month that answer those questions in different and interesting ways. 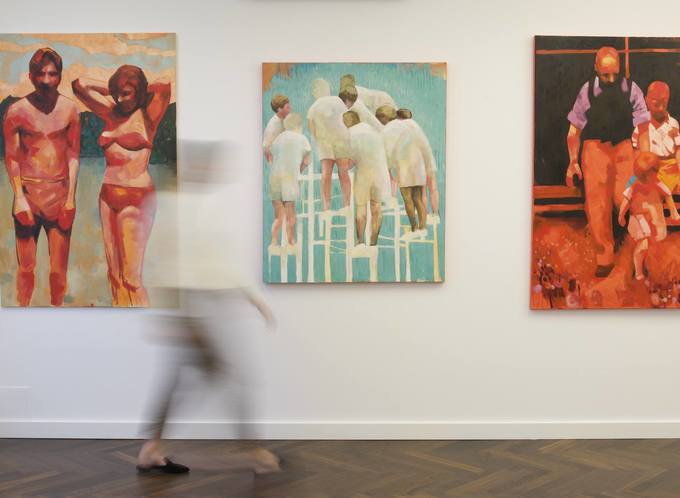 Exhibition view: Of Recklessness and Water, Climbing Frame and It's Not Like Years Ago by Amy Dury in the Amy Dury and Philip Maltman Exhibition

The ostensible subject of Indischer Ozean 6 by Philip Maltman, the painting that greets you as you enter our Berwick Street space, is the Indian Ocean. Clockwise from the top, in gestural brown and green strokes, you can make out the bottom of the African and Asian continents and a corner of Australia. Painted in white and grey in the centre of the canvas is Antarctica. Paradoxically, the ocean itself seems to be missing.

In other words, Maltman’s map is inaccurate. So is It’s Not Like Years Ago, Amy Dury’s painting of three figures stepping down from a porch into a garden. Originally a freeze-frame of an archived home video, the artist has reduced the image to a collection of simple forms that threaten to give way to total abstraction at any moment.

In both works, and all of the other paintings on show, the artists act as unreliable mediators between their subjects and the viewer. The objects that they paint are obscured by their materials, memory and imagination. Some details are mysteriously missing and others added from nowhere. I suppose this is disappointing news for those visitors who expect to learn more about the geography of the world and human anatomy from the exhibition. But it is exciting news for those who want to see some examples of the creative possibilities of painting as a practice not answerable to the true nature of the external world, but to each artist’s internal and private impression of it. 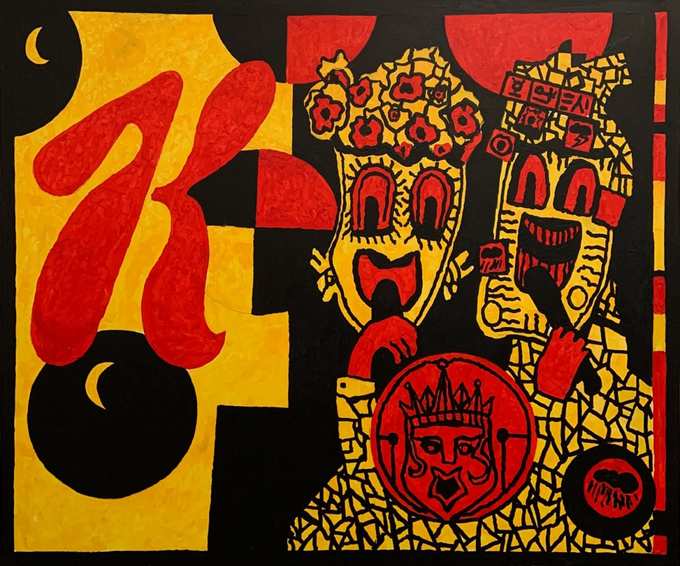 Looking at Dury and Maltman’s paintings is a relatively simple way into thinking about art’s distorting relationship with its subjects. At least on the face of it, their paintings intimate real and tangible things. Derek Boshier’s world - both in what he chooses to represent and the way he chooses to do so - is more chaotic and complex.

The Identi-Kit Man, one of his most famous paintings, shows a man confined to the shape of a jigsaw piece, his right arm turning into a red-and-white striped slug of toothpaste. The artist explains that the work represents ”the amorphous “us”” - the group identity that we assume as participants in capitalism.

In this exhibition, his eighth with Gazelli Art House, Boshier’s primary subjects are Greek mythology and South Korean mainstream entertainment. From these starting points, the artist goes on quite a journey: the show’s press release mentions the demise of power structures, deception, mystery, cultural appropriation and - a favourite of Boshier’s - consumerism. His way of representing these themes involves a number of motifs that he has used for many years, such as the Special K logo, and the figure of a falling man.

Although much more convoluted, the relationship of representation between subject and artist is still there: there is ultimately a group of real-world things and a group of paintings. I won’t try to understand the process by which Bosher translates the former into the latter but, at its core, the undertaking is the same: an artist showing the viewer their own unique and personal version of their subjects. 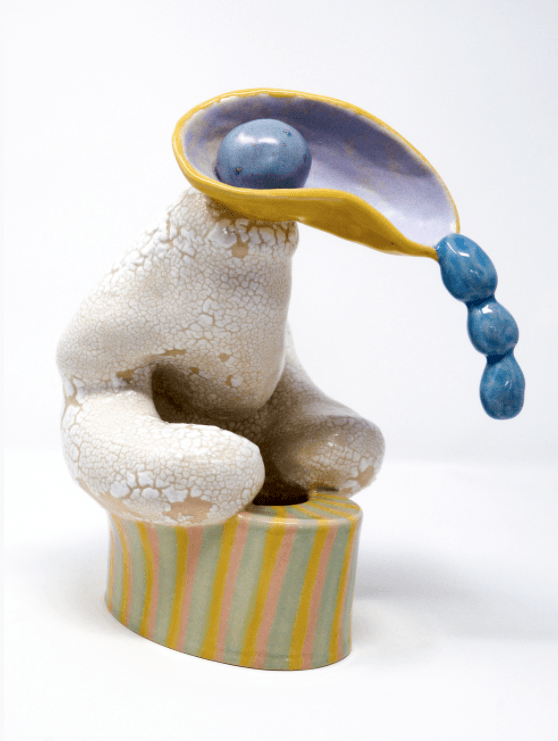 Reading Between the Lines by Holly Stevenson. Image courtesy of Sid Motion Gallery.

Unlike Boshier, who borrows from Greek mythology, contemporary popular culture and everything in between, Holly Stevenson is an artist concerned with two very specific subjects: Sigmund Freud’s favourite ashtray and the last cigar he smoked. These seem like fairly innocuous things, and they both actually existed - in fact, you can still see the ashtray today on display at the Freud Museum in Hampstead. But in this exhibition, we see new versions of them - rendered through Stevenson’s own ideas surrounding them. As part of her psychoanalytical practice they become female and male forms, metaphors for gendered dominance and oppression.

In one of the sculptures on show a group of anthropomorphic moss green cigars crowd a matching ashtray, long tongues sticking out of their pink gargoyle-like faces. Others are more abstract; vaguely phallic and yonic shapes sit atop fleshy, colourful bases. As the artist explained in an interview with Open Space Contemporary, “​​through these two forms [the cigar and the ashtray], I developed my own alphabet with which to work and through my reading of psychoanalysis.”

This exhibition prompts  a question that is ever-present in both contemporary art and psychoanalysis: “but what is it really”? I don’t think that Stevenson is interested in ashtrays and cigars. They are her way into a conversation about sex, gender, trauma, desire, childhood and so many other things. And within the space, we as viewers can become part of this conversation - we just have to read between the lines.