The last “normal” Summer for London’s art world was almost two years ago now. For our gallery scene’s old guard, a normal Summer involves opening a group exhibition in June, following the collectors to months-long holidays in Monaco, before returning in September to resume normal programming.

But this year feels different. Many of the younger galleries that grew during lockdown seem more content showing interesting art than finessing collector relationships. They are also finding more affordable space than ever before to do so. As such, they are continuing with their physical programming over the Summer months. The four exhibitions below represent what I hope will be a permanent shift in our city’s art world from chasing collectors to putting forward-thinking artists and exhibitions first. Time will tell whether financial barriers end up forcing these new galleries to take a more sales-driven approach in the future, but I am enjoying this moment while it lasts.

Soft Opening’s Piccadilly Circus gallery is a glass vitrine inside an underground station. For this exhibition, an “army of lovers '' sits in the space. Five ceramic sculptures by Narumi Nekpenekpen, roughly cast in porcelain clay using an arduous handbuilding method, look out at the viewer - be that viewer someone who has travelled with the intention of seeing the exhibition or an unsuspecting commuter passing through the station. The interplay between artworks and their surroundings that this novel space facilitates is the perfect backdrop for a series of three exhibitions entitled Intra-Action, in which Nakpenekpen’s show is the first.

Kate Wong, the series’ curator, defines intra-action as the idea of “an infinite exchange of things influencing, diffracting and working inseparably.” Rather than being inherently discrete, intra-action suggests that objects and actors - like Soft Opening’s artworks and Picadilly’s commuters - are inescapably connected. 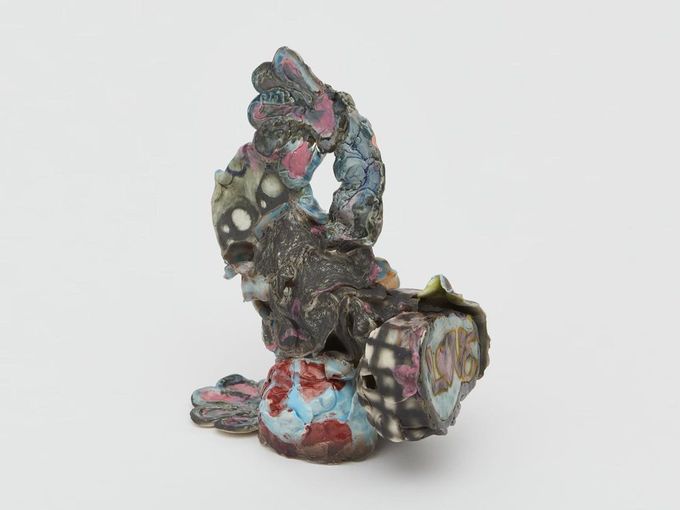 Nekpenekpen’s sculptures themselves suggest another kind of interconnectedness. I feel a tension between their rough and angular form and their wide, cartoonishly expressive eyes. The former makes me think of Jean Dubuffet’s papier mache sculptures or Louise Bourgeois’ spiders, the latter reminds me of anime novels and Bratz dolls. Realistically, this tension is not inherent in the sculptures. It comes from the baggage that I am bringing with me - the idea that canonical contemporary sculpture and modern consumer culture shouldn’t exist in the same entity, that they shouldn't intra-act. As the exhibition text puts it, these sculptures “protest against the binary of low and high art,” creating a space for the two to exist side-by-side. 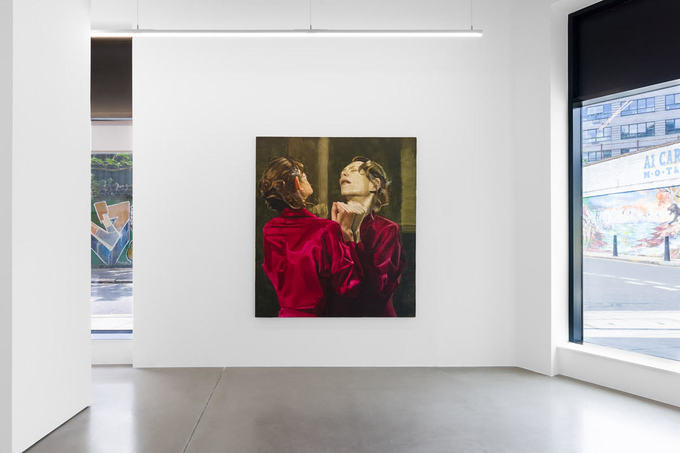 The subjects of Joseph Yaeger’s paintings vary wildly. His solo exhibition with VO Curations last year featured images of two synchronized swimmers, an anonymous sweaty forehead and bald patch. In each work is a physical interplay between watercolour paint, an intuitive and immediate medium, and the more permanent and imposing gessoed canvases that Yaeger uses. This can be mapped onto a conceptual interplay between the subconscious and conscious in the artist’s creative process. He is interested in the line between these two inner states.

The source material for his paintings come from corners of the internet including conspiracy theory websites and home videos uploaded to Youtube. The artist searches for images that capture his subconscious - that jar and dislodge him in ways that he can’t straightforwardly explain. From here, his conscious mind comes into play in the process of translating these found images into paintings, cementing them - and, he hopes, their original subconscious appeal - in time and space. 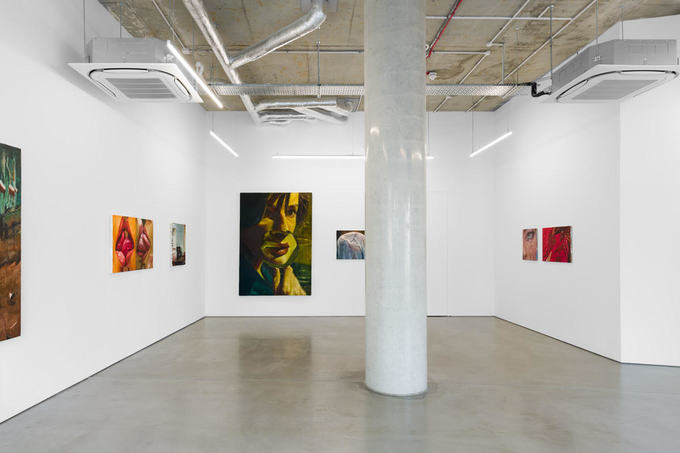 Doublespeak, the title of this exhibition, refers to a way of using words to obscure their subject. We usually associate it with dishonesty: avoiding answering simple questions using complicated jargon or speaking in euphemisms to conceal the truth. For Jaeger, perhaps partially owing to his interest in our inner states, doublespeak is a natural feature of everyone’s lexicon: as he puts it, “language no matter how eloquently arranged naturally fails to express the complexity of this interior.” I hope the paintings in this exhibition go some way to bridge that gap between the artist’s subconscious mind and the words that will always fall short of encapsulating it.

ALICIA HENRY, TO WHOM IT MAY CONCERN, TIWANI CONTEMPORARY (MAY 26TH - JULY 3RD) 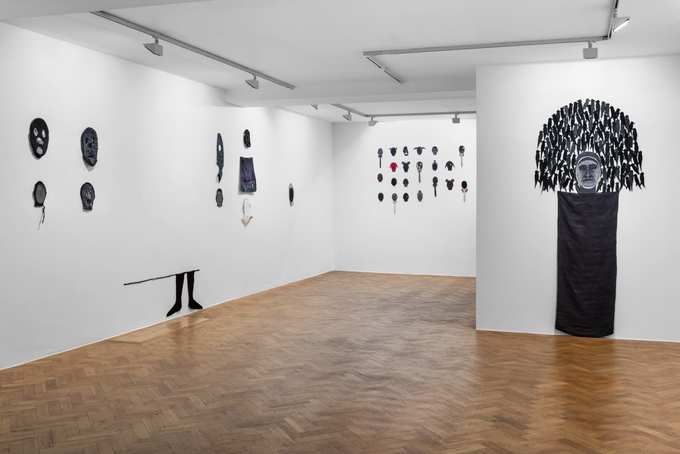 Installation view: Alicia Henry: To Who It May Concern. Image courtesy of Tiwani Contemporary.

Alicia Henry’s first solo exhibition in the United Kingdom takes the form of a gathering of figures. Some are alone and some in groups, some with and some without discernible faces. All portray a similar sense of solemnity.

Henry’s subjects’ bodies mark their individual and shared identities. They are made using various combinations of a broad range of media, each material with its own historical connotations, and contain scattered references from the artist’s own memories to African masks and American minstrelsy. Grouped together inside the gallery, they play out relationships between individuals, families and society at large. In the space, a complex story of real-world power dynamics unfolds. 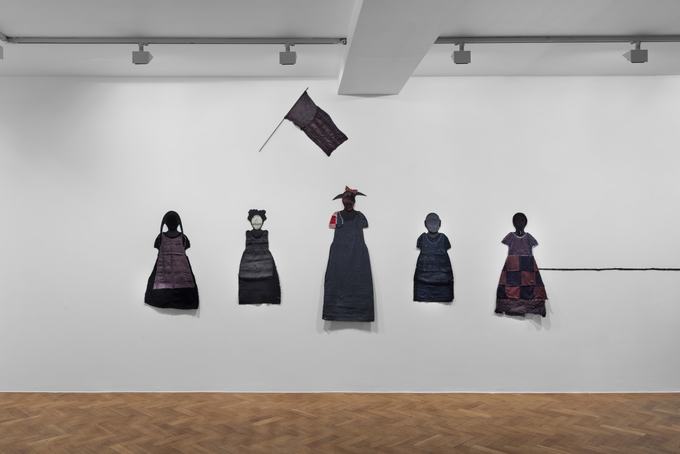 Alicia Henry: To Who It May Concern. Image courtesy of Tiwani Contemporary.

The ingenuity of this exhibition is the way that it involves the viewer in these dynamics. As soon as they enter the space, they also enter the complex web of relationships between Henry’s characters. Like the commuters passing Soft Opening each day, they become part of a relationship of intra-action with the artworks on show. The figures are not fictional - they represent very real, and sometimes uncomfortable societal relationships. Nor are they packed away in square canvases with clear boundaries. They exist in the space in the same way that a human body does, forcing the viewer to examine their own place in these relationships in and outside of the gallery. 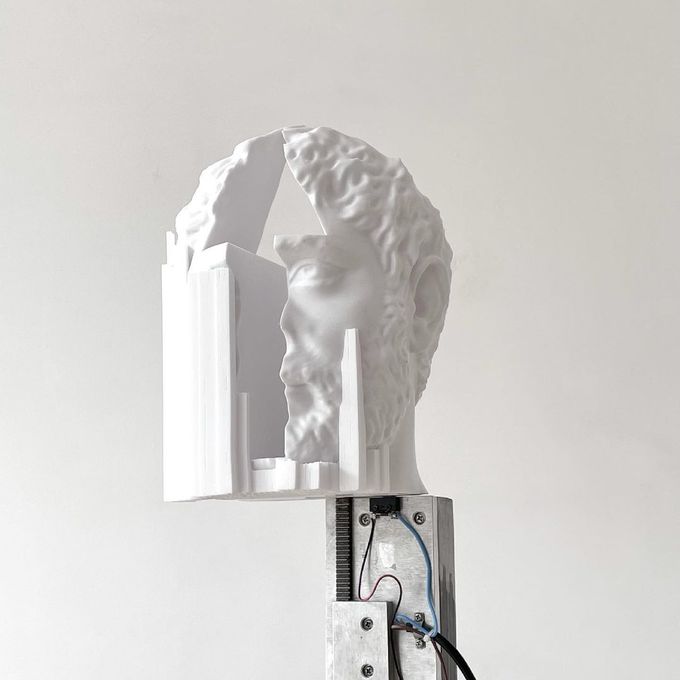 Sometime in late February 2020, I was at the busy opening for a group show entitled Crowd at Hannah Barry Gallery in Peckham. All of the works on show depicted bodies gathered together in close quarters. Around the same time, nomadic organisation Subsidiary Projects and independent curator Jeanette Gunnarsson were cooking up their idea for this show, billed as an “exploration of loneliness and isolation”. At the time nobody was aware of the fact that one of these shows was to be the gallery’s last exhibition before, and the other was to be pushed back to avoid, a year-long period of enforced isolation.

I have a feeling we’re all going to become tired of gallery programming that focuses on themes surrounding the pandemic very quickly, so perhaps it’s just as well that the idea behind this exhibition wasn’t born in lockdown. The five artists on show present novel and nuanced approaches to the theme; from Jessica Wetherly’s science fiction installations that speak to feelings of alienation within a digitised world to Ellie Pratt’s dreamlike figurative works that blur the line between physical reality and the inner worlds of her subjects.

Having followed the artist’s work since first seeing it in the Slade’s 2019 degree show, I am particularly looking forward to seeing Johnny Izatt-Lowry’s paintings in this exhibition. In a muted and often monochromatic palette, they represent simple domestic objects and activities. What keeps me coming back to them is the fine line that they tread between a blissful feeling of calm and a menacing sense of uncanny silence.