Tabitha Soren's photographs are complex, intriguing and nuanced observations of human behaviour. Drawn to the unpredictability of life, Tabitha's scenes are often chaotic and layered, inviting closer inspection of her ever-changing subjects. We caught up with the news-reporter-turned-photographer to learn more about how she creates each work of art.

How would you describe your style and your approach to photography?

I try to make work that is both painterly and resolutely photographic. The Surface Tension images subvert the whole notion of a façade by bringing emotional depth to the surface and a mournful beauty to specular politics. I like meaningful beauty.

Have you always known you wanted to be a photographer?

As a child, I was an avid recorder of my environment, taking snapshots with my pocket-sized Kodak Ektralite 10. My father was in the air force and so, our family moved frequently around the USA, Germany and the Philippines. Besides my immediate family, every person in my life changed every three years. I learned over time that if I got pictures of my friends, I could take them with me. The camera became my friend that way too.

The other path that led me to photography was my first career in television. When I began I shot my own video footage. I eventually was a camera reporter, but I was usually also directing the video out in the field and producing in the edit room. It was as an MTV News reporter that, in 1993, I was awarded the Peabody Award for Excellence in Journalism covering the presidential campaigns of Bill Clinton and George Bush senior. In 1999, I took up a fellowship at Stanford University where they gave me a key to the darkroom and that was the end of my TV life. I fell in love with the magic of analogue photography and made a big pivot. My visual arts practice then went from 30 frames a second to single frame photographs. It was a long road for me to end up as a conceptual photographer but both of these steps were crucial. 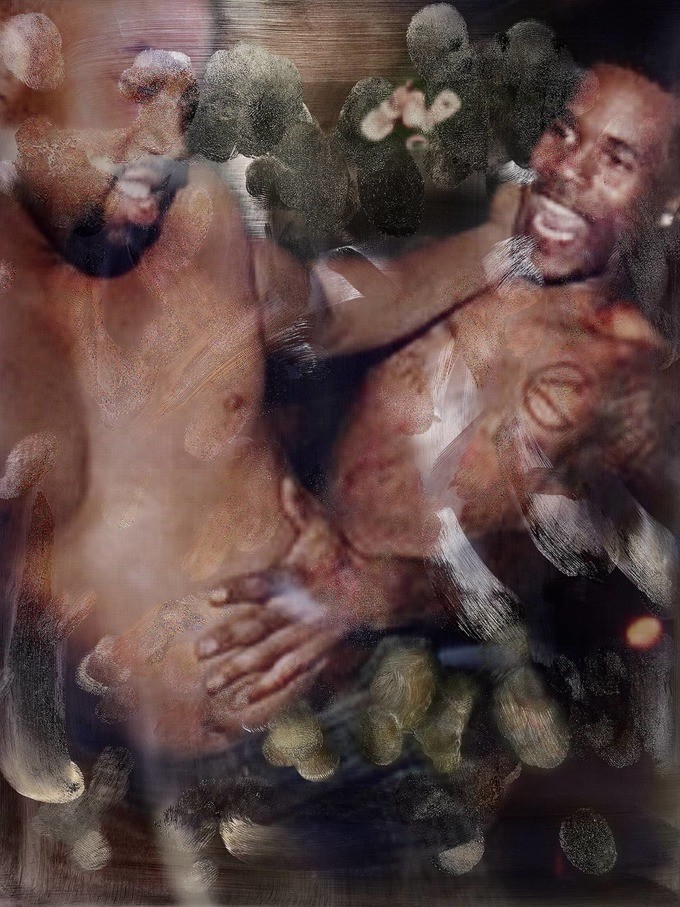 Talk us through the way you title your work. What comes first, the titles or the art?

The titles most definitely come last. Using an 8x10 large-format camera, I shoot iPad screens under a raking light to reveal the tactile trail we leave behind as we use all these devices.

The science of touch makes clear that humans need to connect with the physical world, yet we spend an increasing amount of time satisfying only our sense of sight while touching the cold impervious surfaces of technological devices – especially during the pandemic.

If you think about it for a few minutes, you realize that trading photographs on digital screens is a funny way to transact relationships. Just as ‘LOL’ is a funny kind of laugh and emoticons are a peculiar language. The images beneath the surface in “Surface Tension” address touch through the greasy, messy fingerprints in the foreground. The backgrounds have a huge range whether they depict a teenage girl blowing a kiss to her Mom or the fatal shooting by police of Michael Brown, which ignited riots in Ferguson, Missouri.

Touch is also at issue, more abstractly, in the incremental damage done by the global human presence to the Great Barrier Reef, the Arctic and Greenland. I’m thinking about how we are interacting with technology instead of eachother when making these pictures. The title merely comes from the link to the background image shown on my Ipad while shooting. 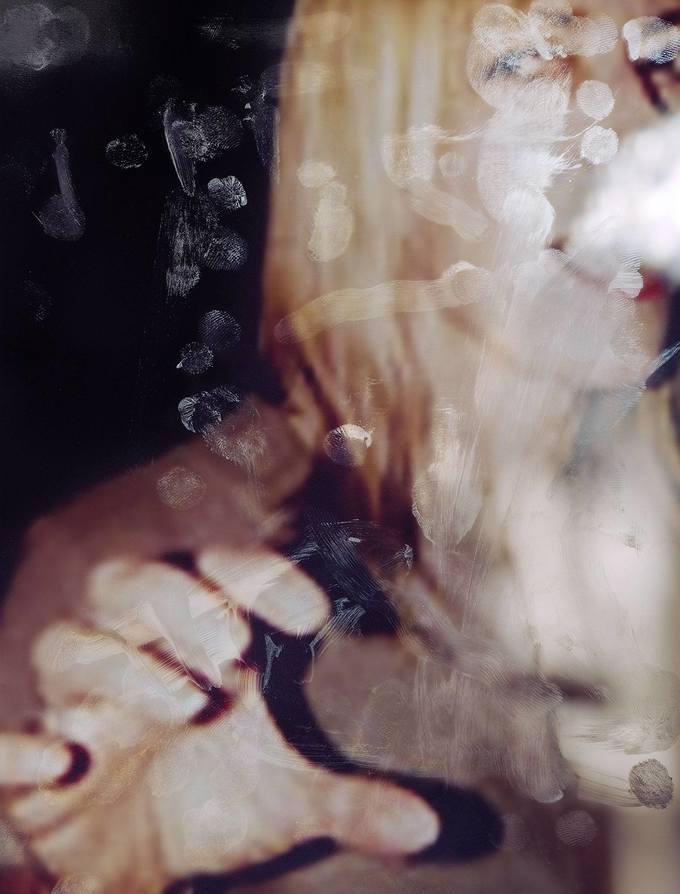 What/Who are your key influences at the moment?

Ever since I first picked up a camera I’ve found myself drawn to situations and images that explore uncertainty. Virginia Woolf, EM Forster, and Margaret Atwood have all influenced Surface Tension too.

I've been looking at a lot of work by the 19th Century British painter of the sublime, JMW Turner. I think of the piece below as an homage to the painter.

The Burning of the Houses of Lords and Commons, 1834 by J. M. W. Turner (courtesy of Tate) inspired Tabitha's piece, pbs.org/nova/earth/greenland_is_shrinking, 2018

Tell us about your creative process. Do you tend to follow the same process with each project?

I never seem to end up making work the same way. Sometimes I wish my process would stay the same to make creating art a more comfortable experience. However, I think its really important to create work that hasn't been seen before, images that aren’t already in someone’s iPhone or even stored in museum vaults. That’s probably why I try to reinvent the wheel each time. It’s also the reason that I work so slowly. There are a lot of ideas that don’t work out. I spend every day in the studio waiting for a happy accident.

I want to expose the human experience in all its anarchic complexity with photography. At this moment in contemporary culture, I feel like our differences are being used as a way to divide us.  Creating solidarity by making photographs that express the similarities of the human experience is ultimately where my art is going to live. 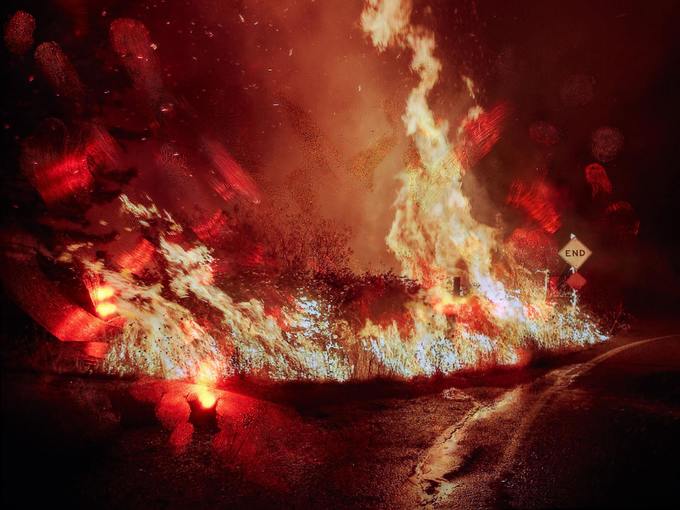 I have been shooting a series called Wrecked during the pandemic. I’m using my photographs of car wrecks, emotional wrecks, train wrecks and plane wrecks to examine real and imagined phenomena. I’d like the pictures of personal disasters to probe the unseen and the unheard to evoke absence, memories, and ghosts. If you had warned me what a train wreck of a year 2020 was going to be, I wouldn’t have believed you. This project acts as a kind of archaeological investigation, uncovering something to make a different kind of sense of what we all endured, succumbed to and frankly, are still fighting.  The new images visualize what is unspoken, unacknowledged, unexplained, and overlooked.

Name a formative experience you've had in the art world and what it taught you.

My photo-based work is about humanizing, normalizing, and bringing the morbidity, dread and anxiety that is part of everyday life to the surface and with any luck, allowing people to feel that connection with everyone else.  People who make art or collect art are many times trying to escape ordinary understanding – we’re conjuring up ideas that transcend our quotidian experience. And sometimes, that’s an anxious and dark place.

However,  I’ve had many commercial gallerists try to move my art somewhere happier, shiner and prettier. Perhaps, something that magpies would fly to at an art fair. It’s demoralizing to have a dealer try to change your direction and I think because I am an older artist I have been able to stand my ground (although I changed galleries).

I think it’s a dealer’s job to be supportive about what their artists are actually creating and to protect them from confusing feedback. I feel like it’s my responsibility to keep making work even if it doesn’t gel with current trends.

The other responsibility I have to myself and to my family is to be grateful that I get to be an artist. When I get knocked down, I want my kids to see me get back up again. I can’t mope around until I get a solo show at MoMA. As a female artist, if history tells us anything, that may not happen until I’m 80, if even then – and the majority of my life would be behind me. That would be a big waste! The work is the reward. That’s the most important thing I’ve learned.