Oleksandr Balbyshev modifies found paintings and sculptures of the former head of the Soviet Russian government, Lenin. The new layers he adds to these artefacts often appear to reference contemporary art masters such as Hirst or Koons. For the other half of his practice, Balbyshev paints intimate, vibrant male nudes. In both of these styles, the artist explores his identity, as well as the identity of his country. 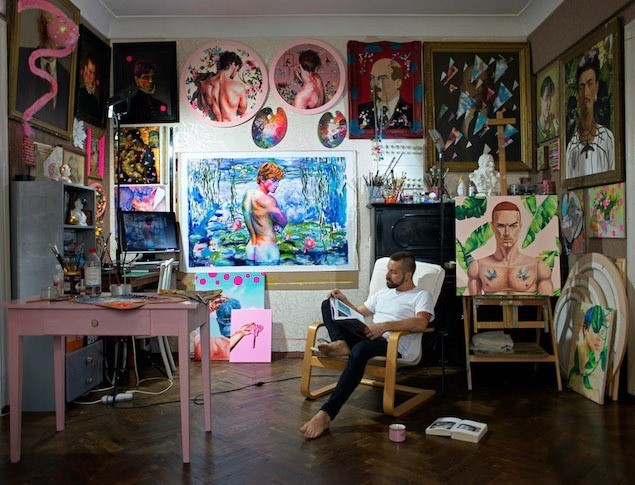 For as long as I can remember, I was drawn to the visual arts. At eight years old, I asked my parents to buy me oil paints. I already had many materials for creativity: watercolors, gouache paints, pastels, pencils, and felt-tip pens, but for some reason, I wanted to paint with oil paints. The oil painting technology was practically unknown to me, but the process seemed almost mystical and mysteriously majestic. I think that's when I realized that I wanted to become an artist. But it took me decades for my dreams to come true.

What inspires your art most?

I draw inspiration everywhere. The works of other artists and popular culture, someone's post on Instagram, a trip to a museum or a flea market, a movie theater or a supermarket, a reading book, the appearance of a passerby on the street, or a story of a friend – anything can become a source of a new idea for me. 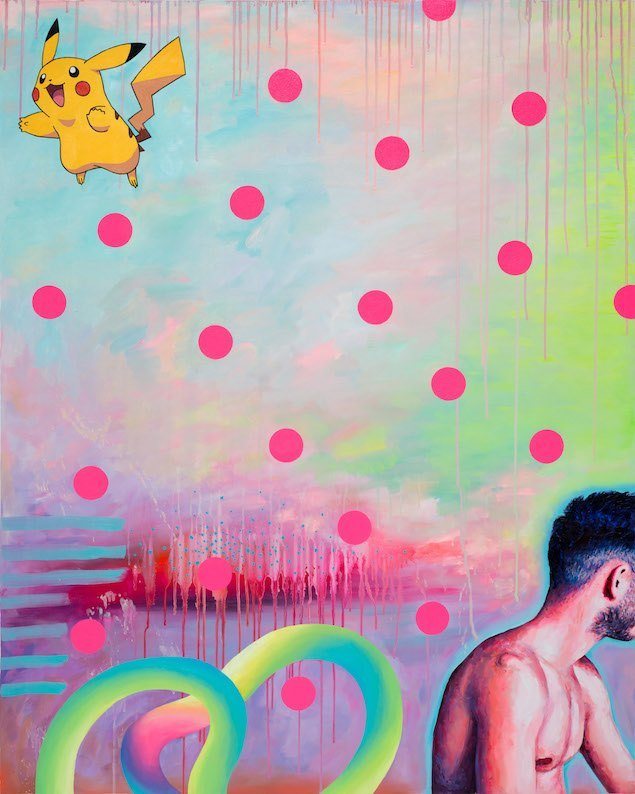 In your work we see lots of images of Lenin, what does he represent for you?

For me, as for many USSR residents, Lenin was more like a brand, a myth created by Soviet propaganda to unite many completely different people. However, in the late 80s, almost no one believed in this myth. The image of Lenin turned into a kind of chimera from fragments of propaganda pathos, folk jokes, obscure historical facts, and numerous souvenir propaganda images. Lenin looked at the USSR people with millions of eyes, but it no longer inspired respect and fear, but rather annoyed. As for Lenin's personality, in my opinion, he wanted to make the world a better place, but at the cost of millions of lives. The greatest crimes in the history of humanity have been committed to achieving the common good. This cannot be justified and must not be forgotten. 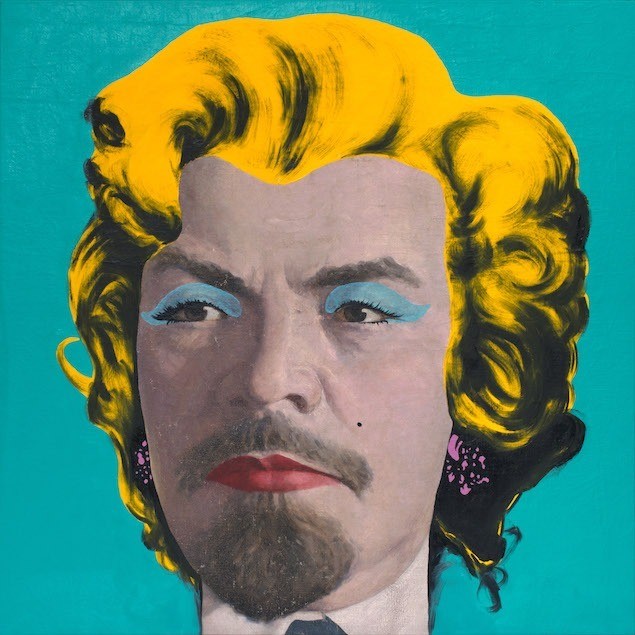 A lot of your representations of Lenin also mimic other artist's work. Why is that?

All forms of art in the USSR were forcibly subordinated to the advancement of the ideology of Marxism-Leninism. Everything that did not fit into this paradigm was eradicated. Moreover, the number of the leader's image created over the seven decades amazes. Many art production workshops were organized. Artists from year to year were painting copies of the leader's portraits, which were then placed in public institutions, educational institutions, offices of officials, and ordinary people's homes. Soviet authority caused irreparable damage to the free art evolution and stopped its development for more than half a century. I combine images of Lenin with famous works of Western artists to imagine what the USSR peoples' art could look like if it was not oppressed. 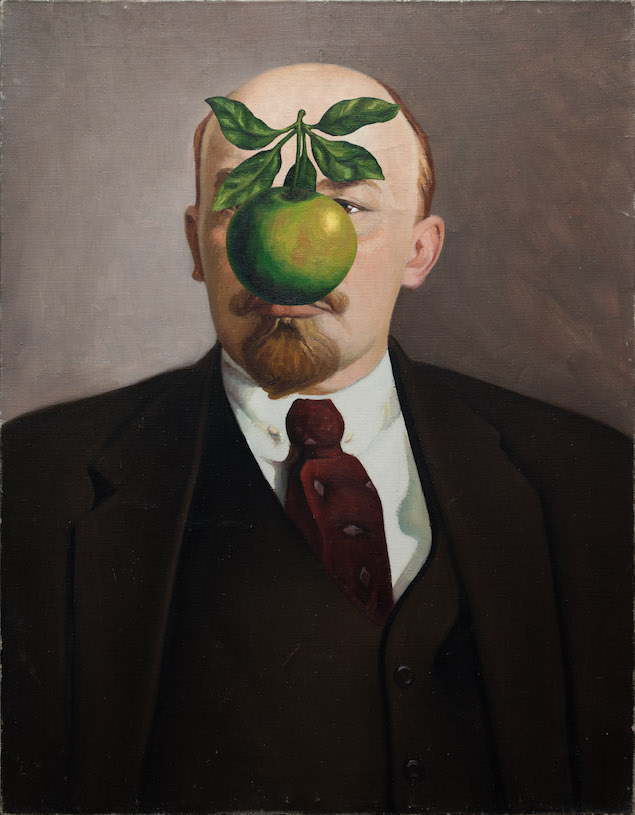 The Son of Man by Oleksandr Balbyshev

You also paint male nudes, what do you hope to communicate with these?

I like to look at a beautiful male body. Therefore, I am sad that there is so little masculine sensuality and beauty in the art world. About 30 years ago, a group of feminist artists, Guerrilla Girls, decided to determine the ratio of male and female nudes presented on canvases exhibited at The Metropolitan Museum of Art. It turned out that male nudes are only 15%. And it seems that today the situation has not changed much. On online galleries where I sell my art, male nudes are about 20%. While the female nude is generally regarded as a staple on the finest of museum walls, the male nude has managed to maintain an air of illicitness up until the present day, continuing to trouble people in different ways. This phenomenon's root cause is because art history was a "white straight men only" club for a long time. Its creators have used mechanisms of suppression of rights and marginalisation of minorities. And the culture of the dominant patriarchal and heterosexual discourses is still influential. I would like to see our culture represent naked men as frequently as we do naked women to remove the shock value of the nude male. And this is my goal as an artist. I use the male nude to express erotic feelings in the same way that the female nude has been used. I am trying to explore the slippage of masculinity and redefine what it means to be male. In this series, I integrate a male body's sensual beauty with paintings of world-famous artists like Claude Monet, Van Gogh, David Hockney, Henri Matisse, Amedeo Modigliani, Paul Cézanne, Andy Warhol, etc. This is a kind of reflection on how the art of the last centuries could have been if the male body had not been discriminated against. 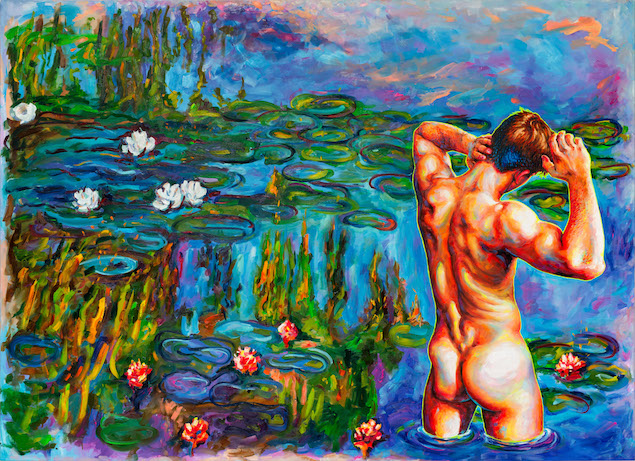 What does art mean to you personally?

Art is a possibility to create whole worlds. Art is the reason that keeps me from getting bored. Art is hard work. Art is life.

My art is not exhibition oriented, so I don't have to make time-limited projects. Instead, there are two significant directions in my art. In the first of them, I am trying to explore the slippage of masculinity and redefine what it means to be male. The second is modifying old Soviet-era portraits of Lenin to overcome the problematic past of my country. When I feel that one direction has tried me, I switch to another. This allows me not to go in cycles and generate fresh ideas.