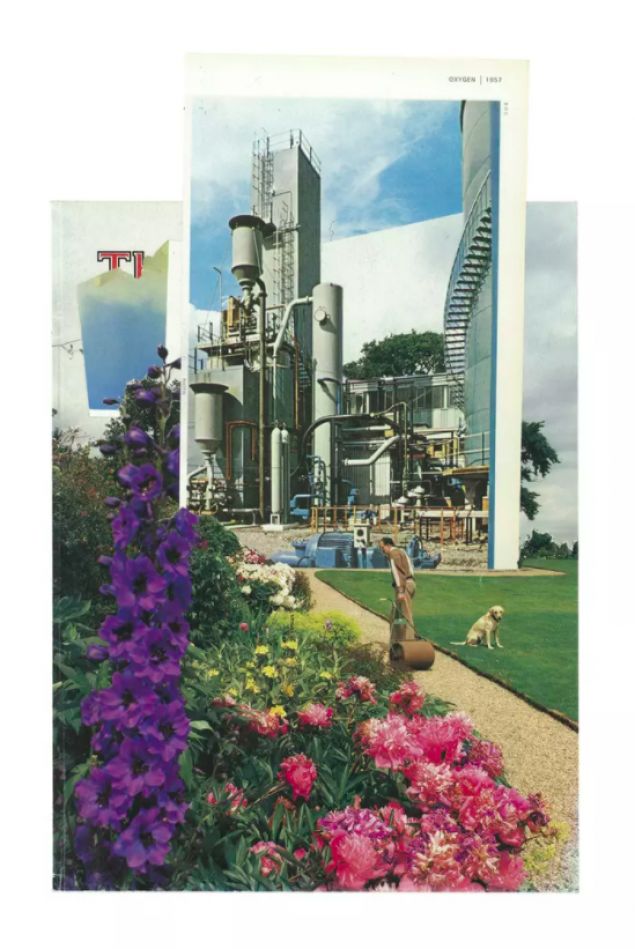 Ben’s professional background in graphic design and photography shines through in his careful selection of the images he works with. Despite his work’s slick and blemish-free appearance, Ben doesn’t use computers to edit his compositions. Ben works hands-on, collecting natural source materials himself such as flowers, then combines them for his pieces and with hand-cut images from printed sources. 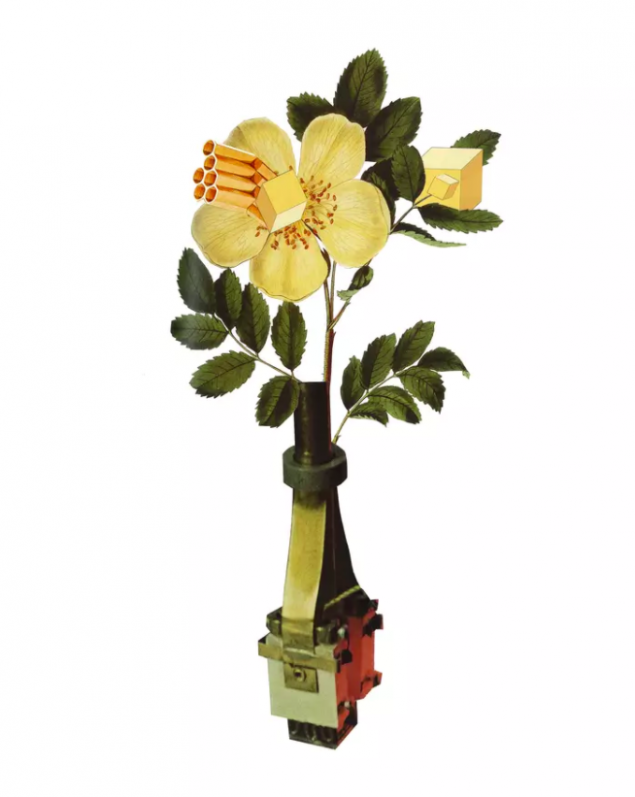 His work asks questions about contemporary social and political issues such as “genetic modification, pollution, urbanisation, and the industrialisation of the natural landscape”. Much of Ben’s work focuses on the divide between the natural and the man-made. For example, his Processed series of mechanically altered flowers, or Man Moves Mountains, in which isolated pieces of machinery break through images of the natural world. 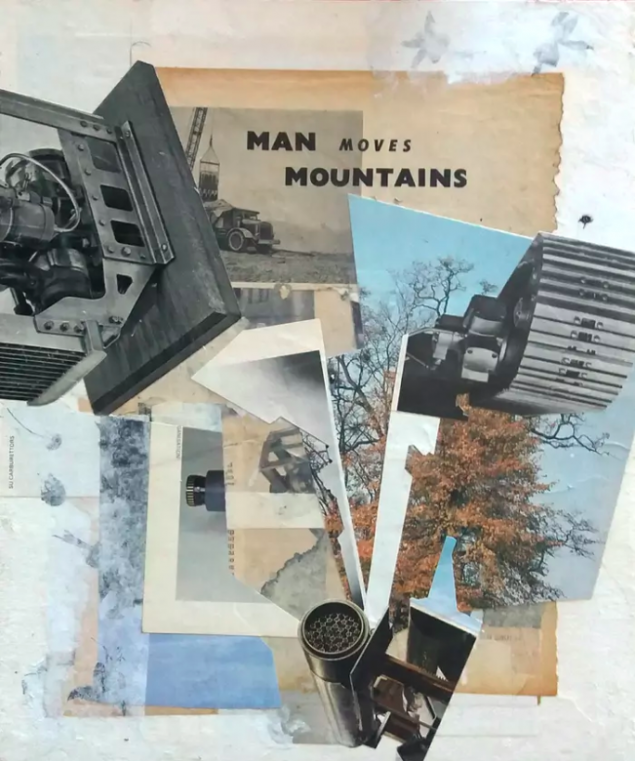 In this interview we catch up with Ben about his career and influences.

How would you best describe your style?

The arrangement and placement of visual elements within my collages are quite graphic. I have a background in both graphic design and photography which are combined and represented throughout my artistic practice. Whilst the layering and composition can be unpredictable and accidental, the resultant artwork can form a graphic conclusion with the aim to communicate an important message.

Has this always been your style?

I have been utilising collage and photomontage techniques for many years and the style and application has changed throughout this time. Much of the works created are indicative of the actual location where I have been working. Some of the larger abstracted pieces for example are from a period where I lived in the South West, whereas for the last 20 years much of my later work is cleaner, smaller, more graphic, and portable, reflecting urban life in and around the London area. I am happy to adapt my style depending on the time, location, and the materials available. It is one of the great things about collage, in that materials and artefacts can be collected and arranged anywhere. I would say that it is one of the fundamental principles of my practice, to reflect my direct surroundings whether by location or by the social and political structure of the time.

Do you feel that your works are addressing a topic, theme or problem? WHat is the driving force behind your work?

My practice is inspired and defined by nature, and influenced heavily by environmental and ecological issues. There is a significant reference in the artworks to issues surrounding topics such as genetic modification, pollution, urbanisation, and the industrialisation of the natural

landscape. I am really interested in the constantly evolving relationship we have to the natural surroundings and passionate about reading ecological and scientific studies. There is a recurring blend of mechanical and industrial structures with botanical and natural forms which runs through my artwork. Photomontage and collage are utilised as a tool to express dissent and to communicate environmental and political statements. My practice also importantly possesses a playfulness which I hope assists in communicating serious messages.

Have certain artists or movements inspired your work?

My work draws upon a variety of historical influences, the largest perhaps being from the Dada movement. I still recall discovering it as a foundation student many moons ago and it remains with me to this day. The way in which the Dada artists generated works which asked difficult questions about society and politics underpins my practice. Their artworks embraced chance and accident, utilising photomontage and collage from images which were fragmented, lost, or unwanted from their surroundings. The very imagery created by and within the system was manipulated, reformed, and distorted to provide an alternate or challenging message. As in my practice the artworks they created are a form of protest and tool for highlighting issues with an increasingly industrialised world.

I am also influenced by the Arts and Craft Movement of the early 19th century where the artists tended to oppose the machine manufacture in favor of hand crafted production. I don't use computers for any of my artworks despite their initial appearance, I only really use digital techniques for archiving or printing purposes. Integral to my practice is the need to stay connected to the materials used and cut, arrange, and glue everything by hand.

Where do you source your material?

I am a really keen collector (or hoarder) of materials and I enjoy the process of sourcing and compiling a variety of resources for my artwork. I collect old books, magazines, postcards and other printed materials from 2nd sales, charity shops, skips, bins, I have no shame. If it's unwanted or discarded then I retrieve it. I also collect natural forms and dry and press flowers referencing the principles of natural observational science. I used multiple dead flies in a piece once, hard to flatten and glue with mixed results.

Do you have a method for creating your work?

The method of creation very much begins with initially collating the materials and spending time to review the library of resources. Sometimes it's hard to remember exactly what I have, and once reviewed can inspire or direct a new piece. Much time is spent cutting, sorting, and filling imagery and I've become quite adept with a scalpel knife. A degree of patience is definitely required, and I never embark on a new artwork without having a clear idea as to how it might look completed and the message I'm trying to convey. Whilst I have an idea of how a piece will develop, I'm very much open to change and accident. Layering, cutting, and glueing resources is unpredictable, but the initial idea remains.

Working with collage allows me the freedom to reconstruct collated imagery and artefacts to explore and highlight important contemporary social and environmental issues and to communicate them. The process of collage lends itself historically well to the act of protest and dissent in an increasingly industrialised and uncertain world.