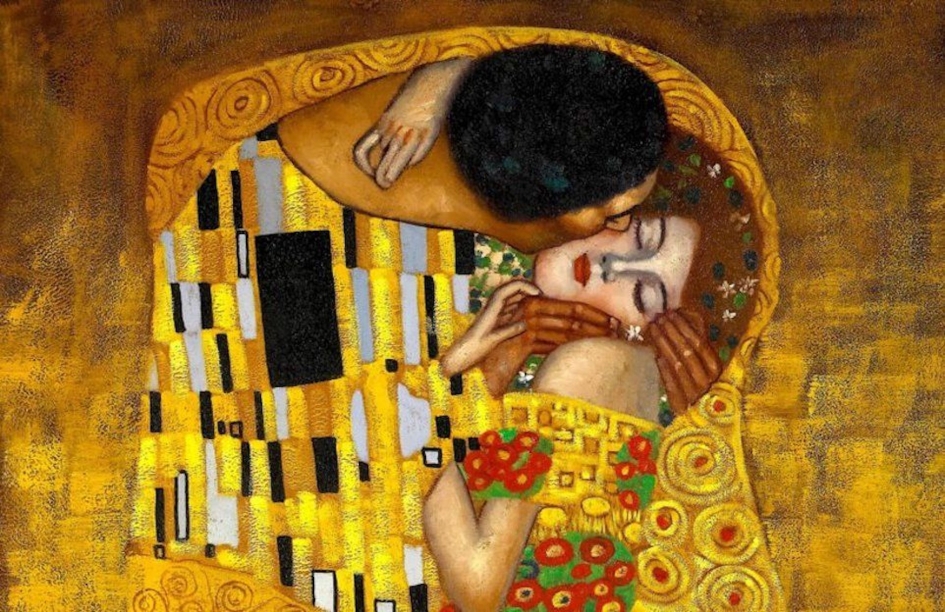 Gustav Klimt and Egon Schiele | Masters of Sex and Death

Given that it’s the week of Valentine's Day, what better opportunity is there to discuss the riveting and nonconformist love lives of some of the most influential artists of the 20th century? Gustav Klimt and Egon Schiele's desperately passionate, expressionist work pushed the boundaries of art and depicted the human figure in radical ways. 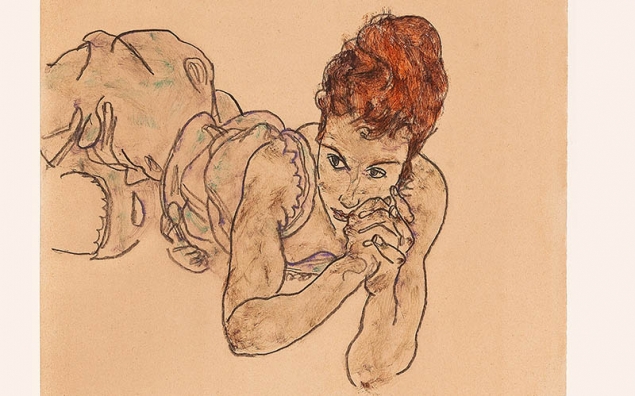 Klimt, born in 1862 was an Austrian symbolist painter and lead member of the Vienna secession movement. The artist also had influence on Viennese expressionism, a movement spearheaded by his biggest devotee Egon Schiele. Schiele, born in 1890 and 28 years Klimt’s junior, was an Austrian figurative and expressionist painter. In 1907, Klimt became Egon’s mentor and they developed a close relationship. 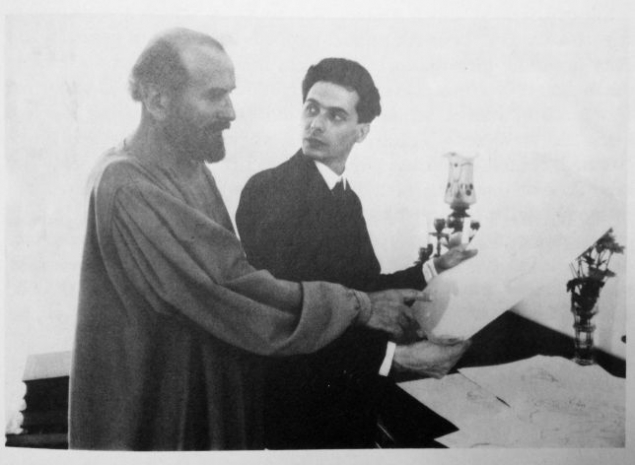 Klimt is unique in that his art is omnipresent yet his personal life is nearly invisible. Much discussion around his life is speculative and drawn from his art and from rumour. What we do know is that he loved women. The artist once said, “I am less interested in myself as a subject for painting than I am in other people, above all women.” And with the exception of his early work, Klimt painted portraits only of women. 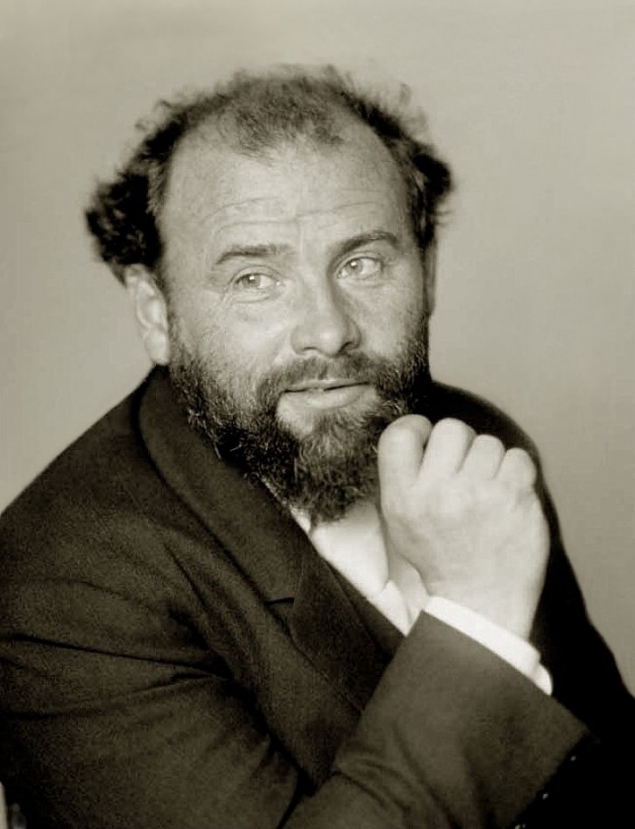 It remains a mystery whether or not his models were lovers and whether his companion, Emilie Flöge, a fashion designer that features in much of Klimt’s art, was a lover or a friend. It is thought he fathered 14 illegitimate children and (not surprisingly) had numerous lovers, including musician and femme fatale figure of the 20th Century, Alma Schindler. 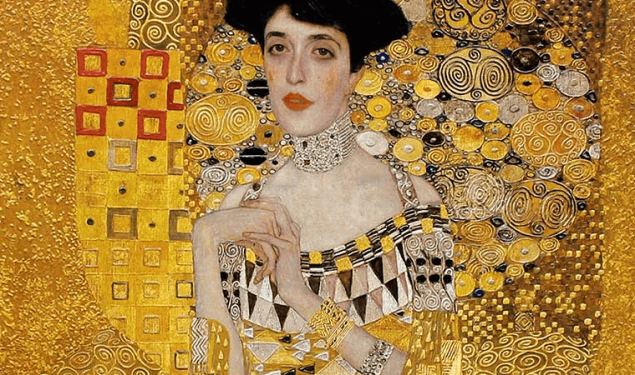 Regardless of rumour, Klimt’s art speaks for itself. It expresses an intense and heartfelt connection between the artist and his models. Klimt's most iconic piece, ‘The Kiss’, currently held in the Belvedre in Vienna, manifests this connection and love exquisitely. 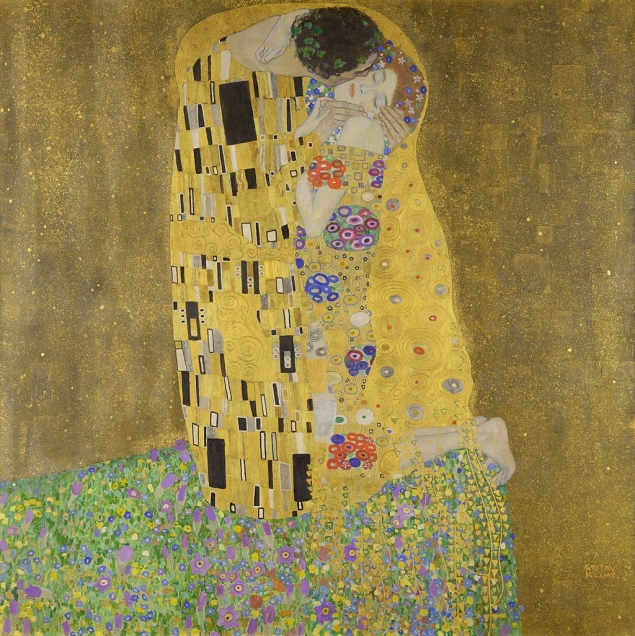 It depicts a couple locked in embrace, surrounded by a shower of gold. The male figure (thought to be Klimt) leans over the female figure, holding her face while placing a kiss on her cheek. The female submissively leans back and wraps her arms around him. She faces us with her eyes closed. 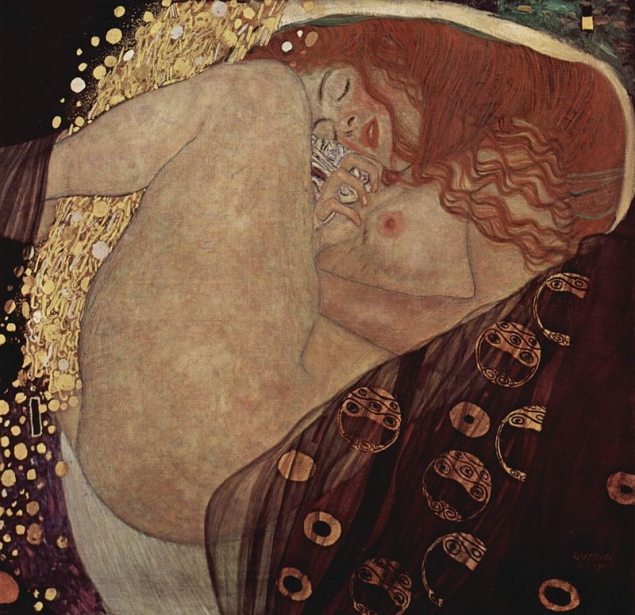 A sense of the spiritual is created through the shimmering gold abyss that forms the background. They are removed from the norm of everyday life and situated in the elevated moment of ‘The Kiss’. The divine is implied through the gold cloth placed over their heads, replicating a halo and paying homage to classic religious art. 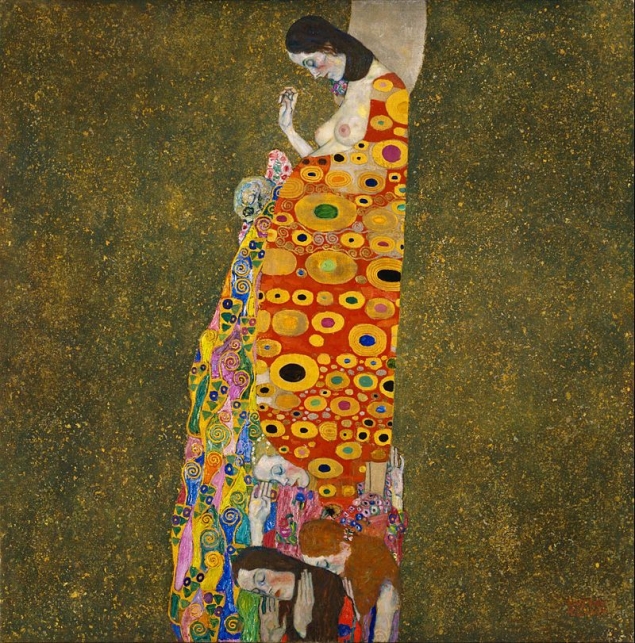 The geometric patterns within the piece reflect the perfection of the romanticised moment. The gold cloth draped around the figures is adorned with patterns, erect rectangles on the male and soft round circles and flowers the female, alluding to sexuality. Klimt’s sumptuous fresco oozes luxury, love and transcendence. 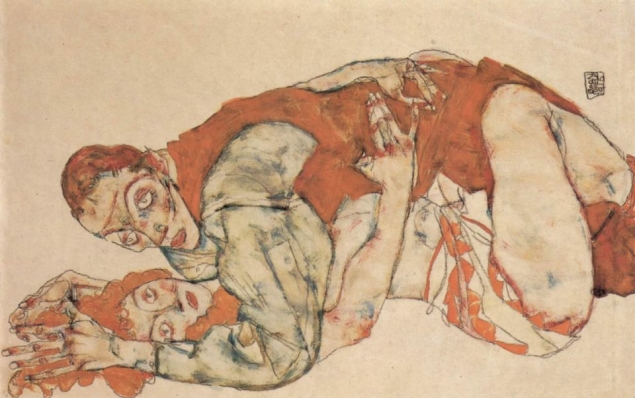 Schiele differs to Klimt in that his life is as notorious, intriguing and famous as his art. Even from a young age Schiele’s life was controversial, with suggestions that he had an incestuous relationship with his younger sister. In 1912, he was arrested for allegedly seducing a minor. During the court proceedings, it was his art that came under scrutiny. Much of his art depicted young girls in an unapologetically provocative way. It was considered pornographic - and the judge burnt one of his works. 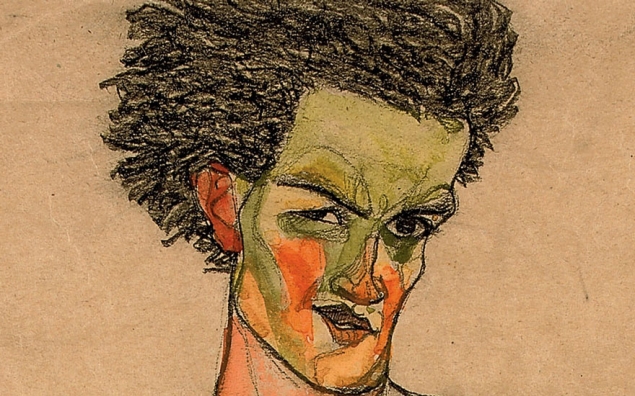 Self Portrait by Egon Schiele

In 1911, Schiele met the seventeen-year-old Walburga (Wally), who lived with him and served as a model for some of his most striking paintings. Wally and Schiele lived together for four years until he ruthlessly discarded her for a financially beneficial marriage. Out of this heartbreak a masterpiece was created. Schiele’s ‘Death and the Maiden’ is currently held in the Belvedere Museum in Vienna. 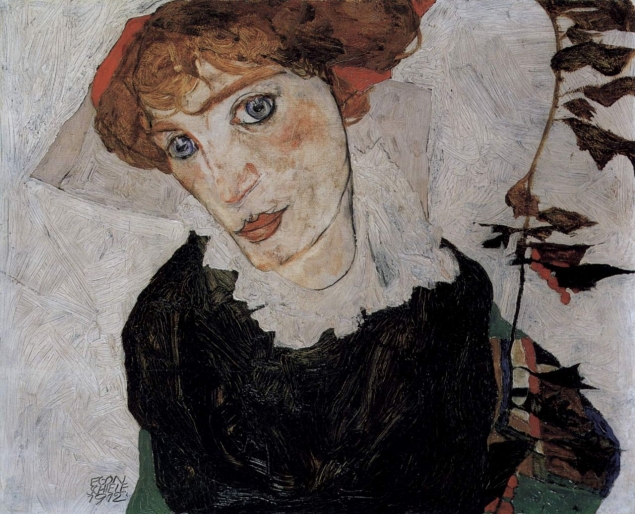 Portrait of Wally by Egon Schiele, 1912

The piece nods to Klimt’s ‘The Kiss’, but the dramatic and tormented scene is in fact it’s antithesis. It depicts a couple cleaving onto one another, surrounded by a devastated wasteland. The male figure is a self portrait depicting death, Schiele’s grey face and black eyes hauntingly look out at us. Schiele, like Klimt loved women, however his primary subject and greatest interest was himself. He was a narcissist and obsessed with his own visceral experience of life. 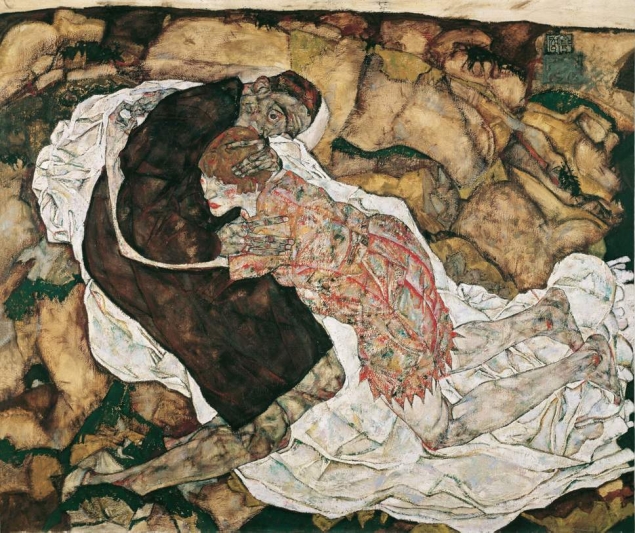 Wally is depicted as very much alive and her pink dress brings a splash of colour to the piece. It has been suggested the contrast between them represents the collision of pre and post WWI Vienna. Schiele’s genius is his ability to express ugly and personal emotion while reflecting on the universal suffering of war. 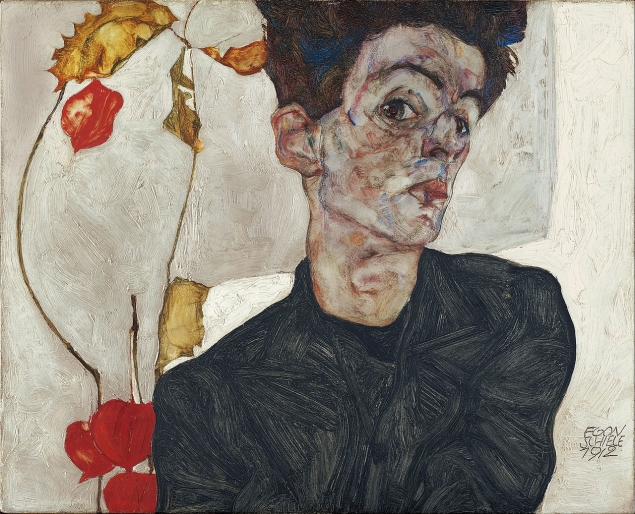 Self Portrait with Physalis by Egon Schiele, 1912

Schiele created a lumpy, awkward and fragmented scene and in doing so acted as a catalyst for the modern art movement that rejects the ideal nude. Schiele and Klimt use the human form to express raw emotion, often through physical distortion. Both artists are early exponents of expressionism whose work was highly influenced by their lives and experiences of love.

EXPLORE OUR COLLECTION OF WORKS WITH A GOLDEN TOUCH >> 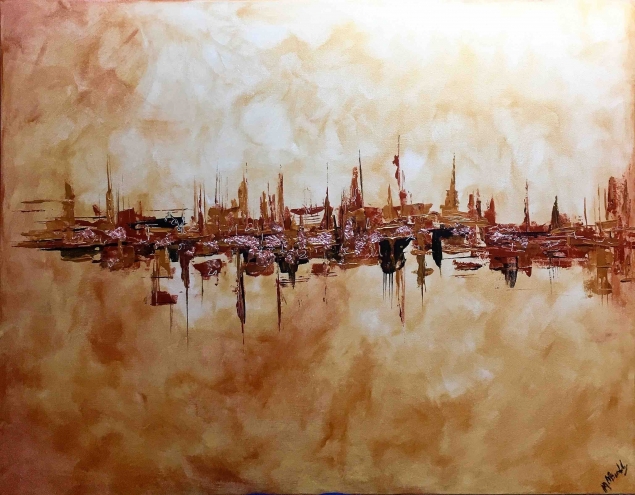