My Time As An Artists' Apprentice in New York

My art education was of an unconventional nature.

I had completed a higher diploma in art and design at Epsom Art School at 18 and was on course to specialise in Graphic Design. During that course I had become restless and realised that graphic design was not for me.

My father, artist Stan Peskett at that time was established in New York with a studio in Hampton Bays.

I made the decision to go to New York and become an assistant to him in his studio, I hadn't spent a lot of time with him during my childhood as he lived out there since the mid 70’s. I wanted to get to know him and see how and where he was living. 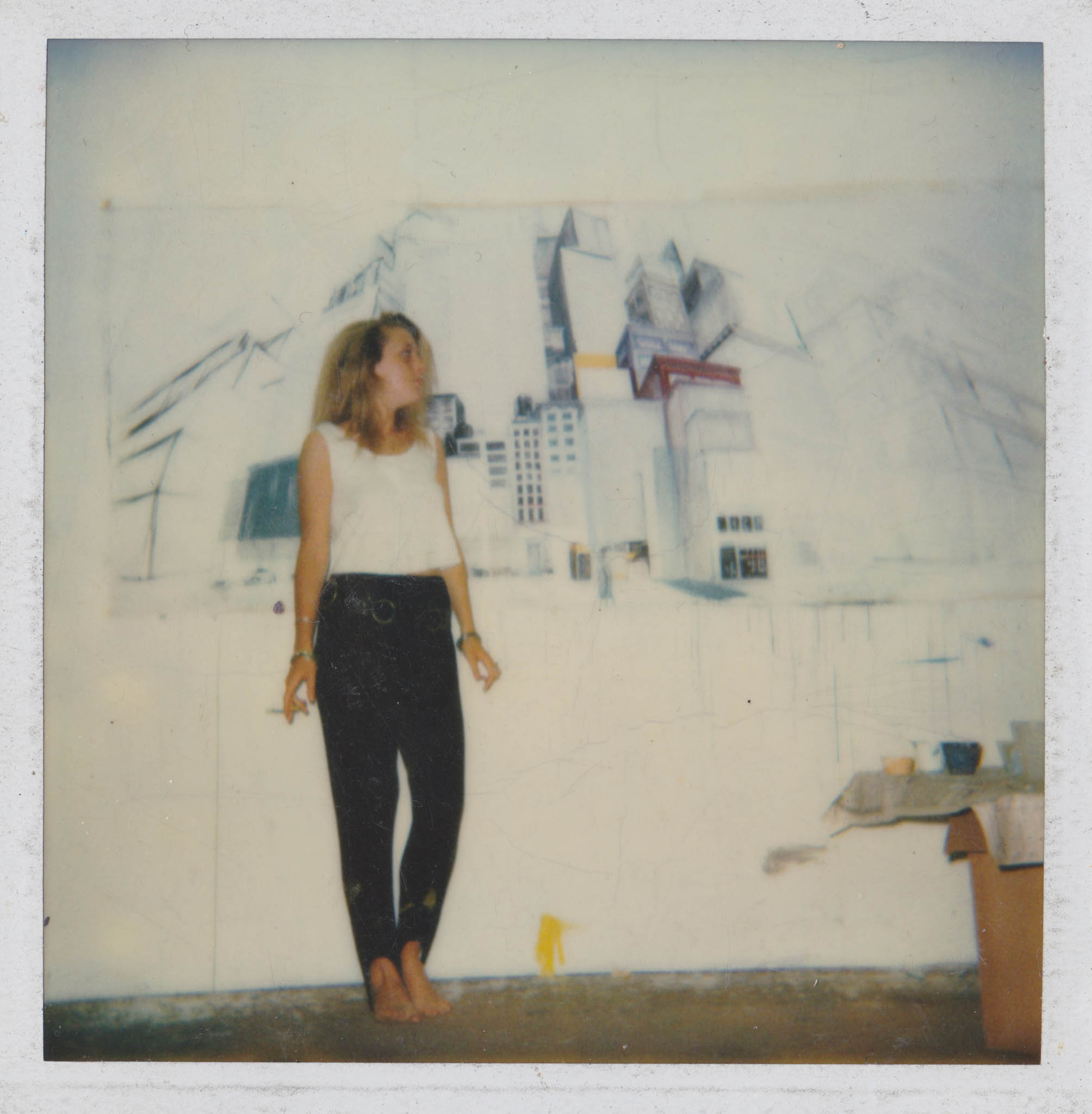 We were often staying in other artists’ lofts and apartments whilst working on the projects in the city which I assisted with; nightclubs including Danceteria and storefront displays on Broadway near St Marks Place.

I learned about materials, working large scale, perspectives, acrylics and an array of different mediums.

I was also discovering and developing my own style, my early urban landscapes were taking shape, this sketch was a first impression of the city that I would use for reference material for a larger 6-foot canvas. 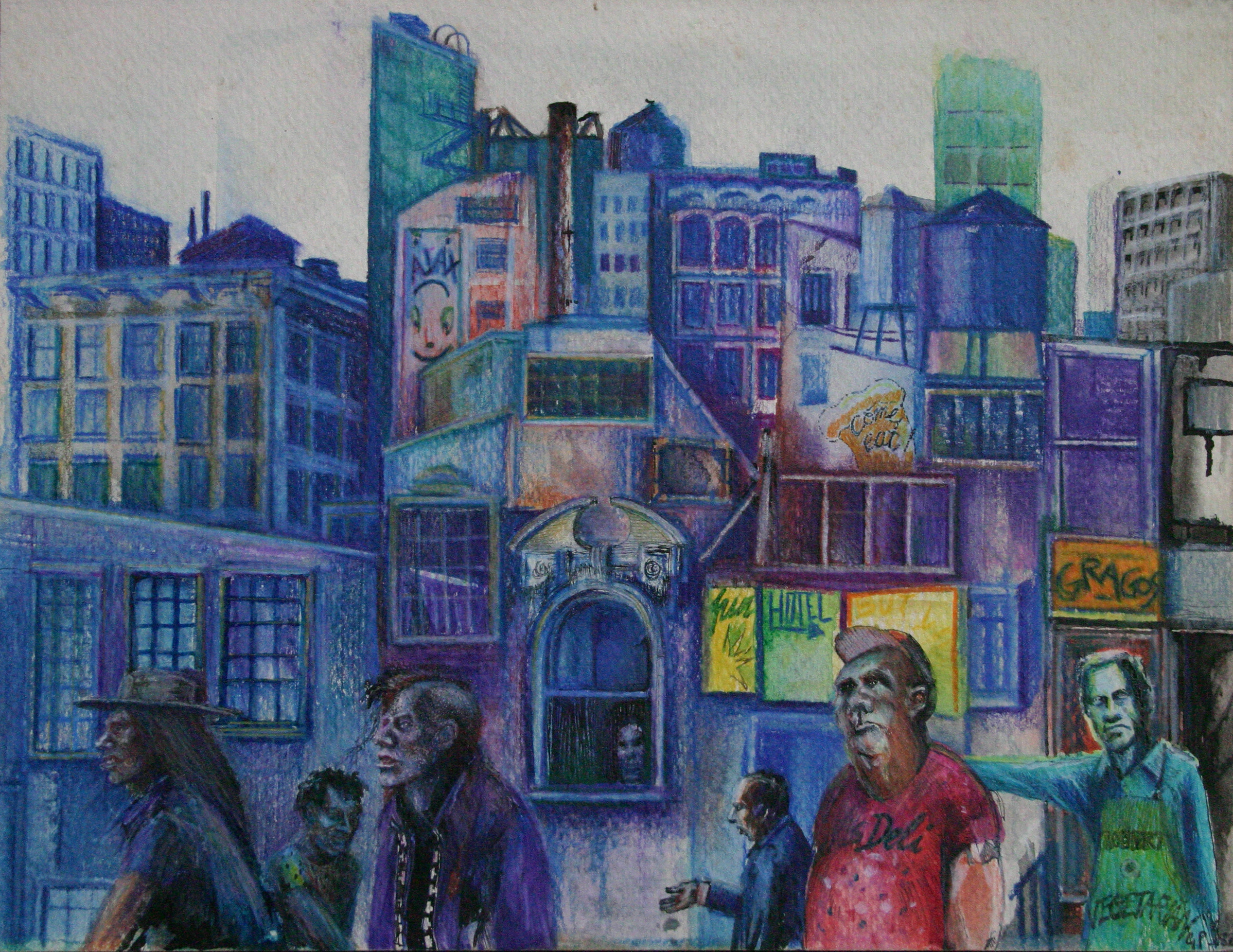 As things developed for me, my talents were picked up on by the late Guillaume Gallozzi an art dealer who represented my father. He showed an eclectic mix of art, many from his personal collection at his legendary gallery/townhouse where he lived, curated and entertained on West Housten Street. 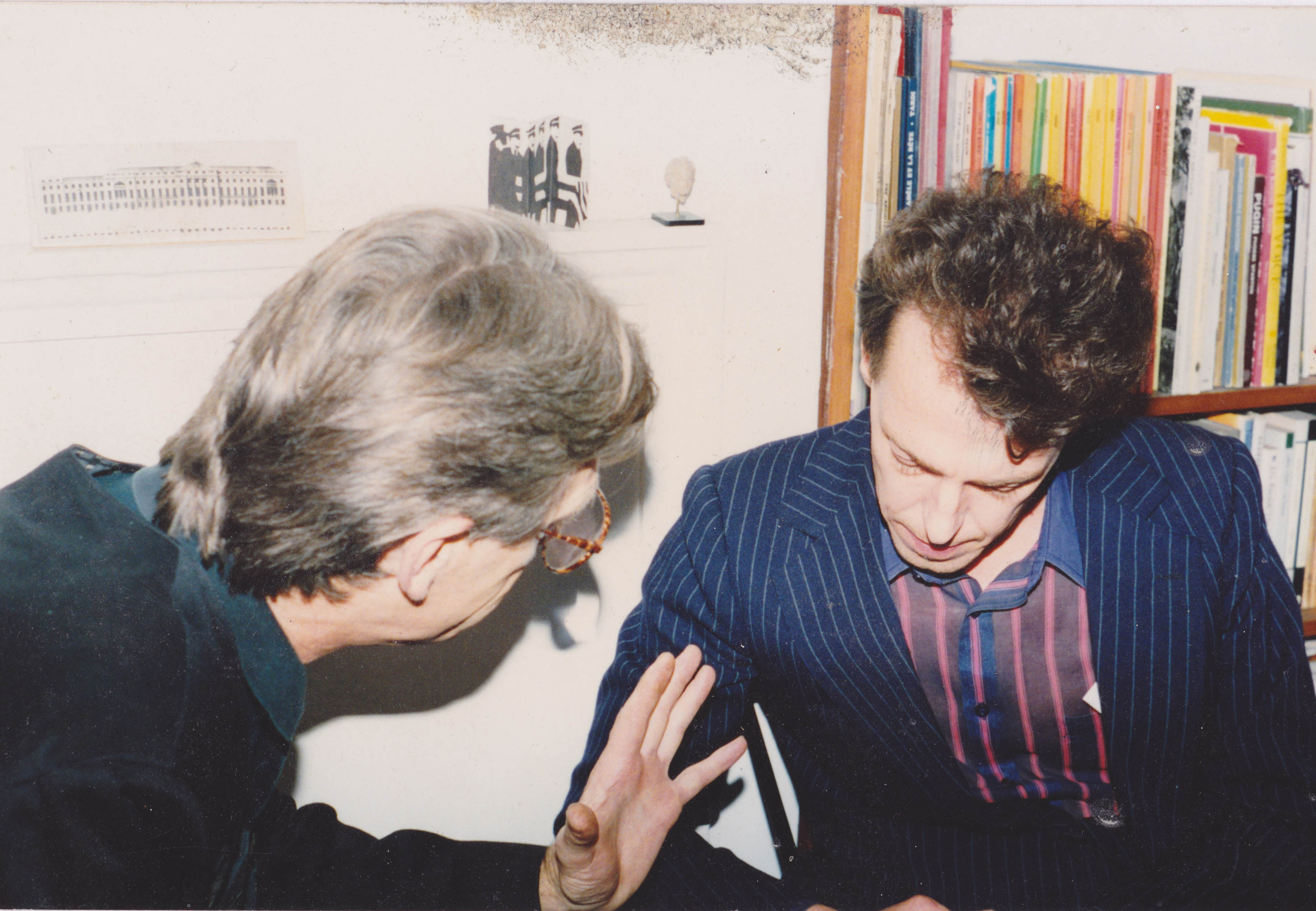 Guillaume introduced my first complete cityscape painting to one of his collectors. I was really excited to have sold my first work at such an early stage in my career. 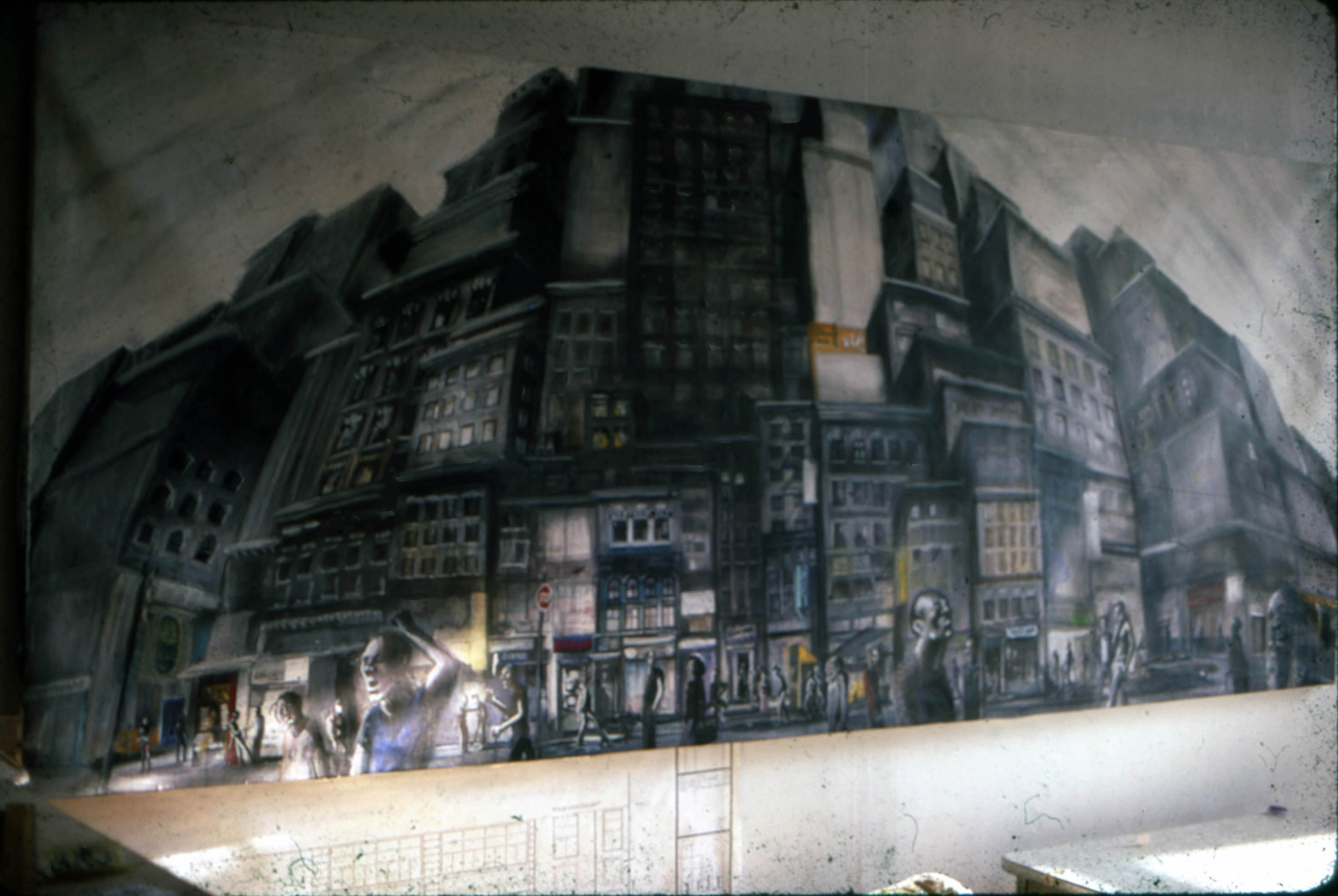 I later spent time staying at the Gallozzi Gallery on West Housten Street whilst I painted the room of the late Stephen Greengard (Author and curator) whilst he was away. 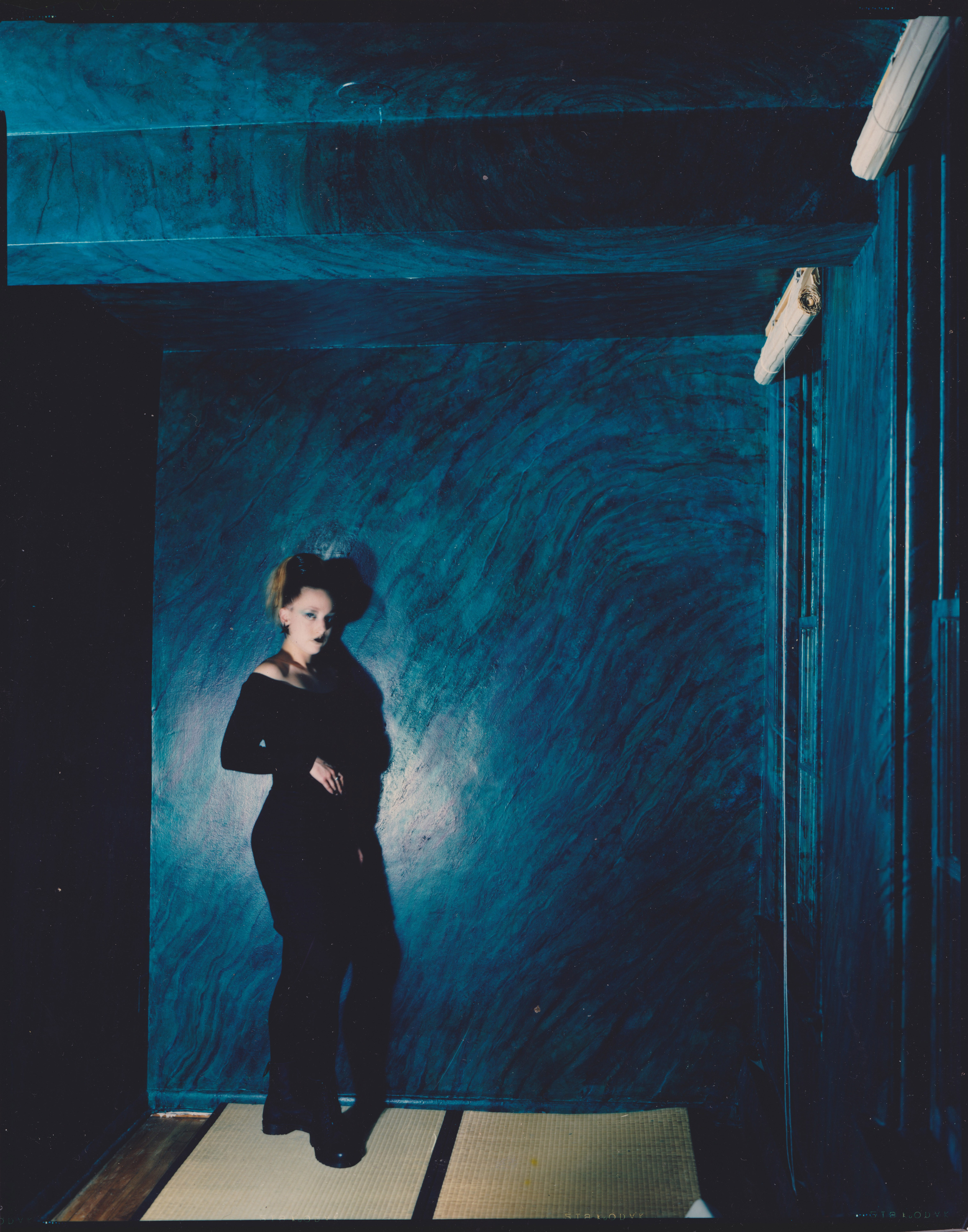 Guillaume Gallozzi sadly passed away in Paris, December 1995; this picture was taken of us in London a couple of years before. 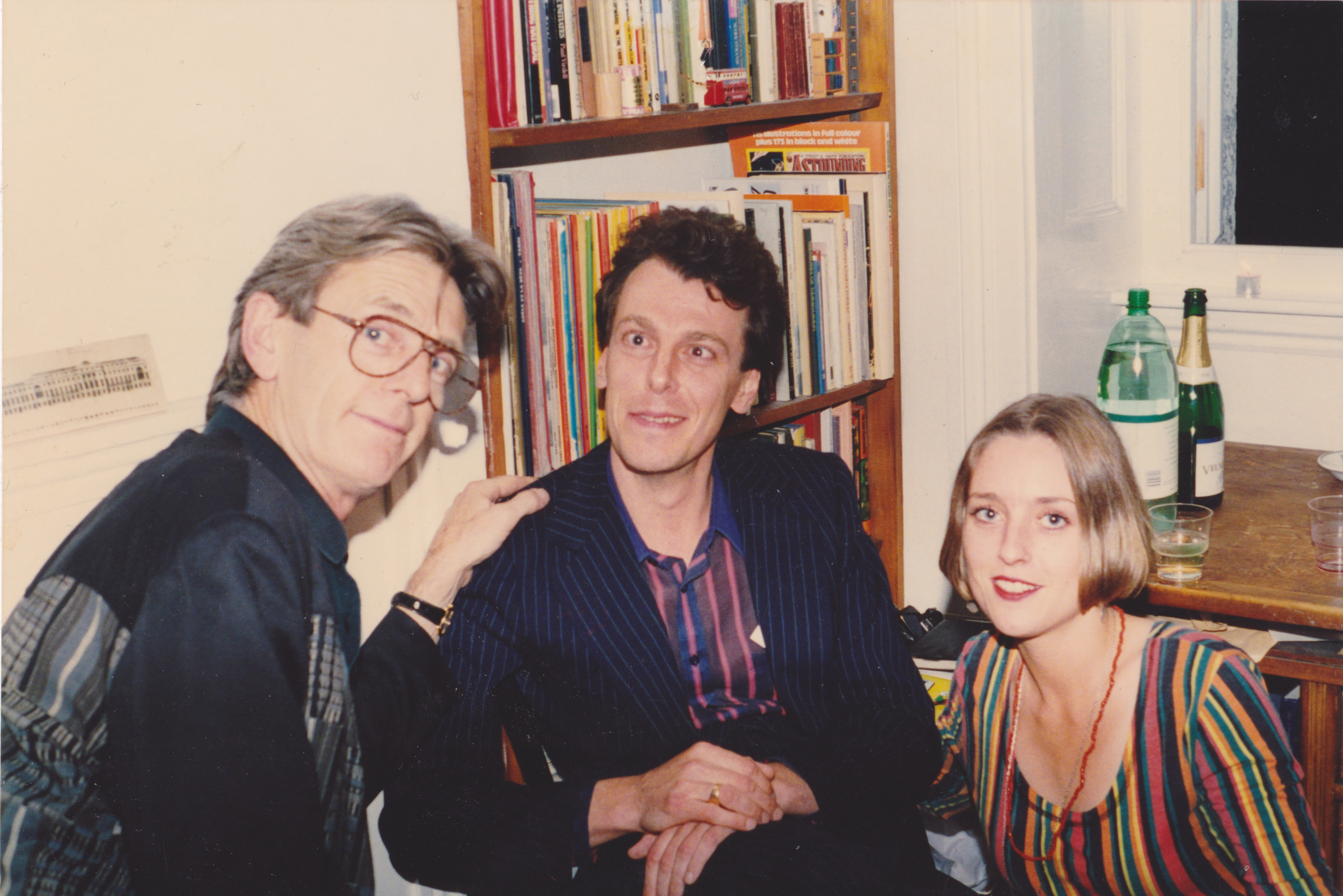 Stan & Georgia with Guillaume in London

Prior to this, Guillaume had been in curatorial partnership with Joe La Placa, founder of All Visual Arts.

At the time I was in New York, Joe was painting in a loft near Canal Street.

He required an assistant for a period whilst he completed a series of large-scale paintings of optical illusion paintings. Here, I learned about materials as I stretched Joe's canvases for him and prepared them with primers and masking tape, daily visiting his studio and running errands.

The New York art world was still small and you could easily run into bigger names around the city. My father knew a lot of artists, including Jean-Michel Basquiat and I was introduced to him not long before his unfortunate passing, he was fairly unwell when I met him, the excess of the city had taken its toll.

He had not yet reached the realms of fame in life as he did after his death.

I have great memories of spending time with another close family friend Michael Holman, a New York artist who formed the band Gray with Basquiat in 1979.

Living in the East Village we would drink coffee in a diner with a young Vincent Gallo.

I learned so much about art and film, stories would be shared, ideas discussed. 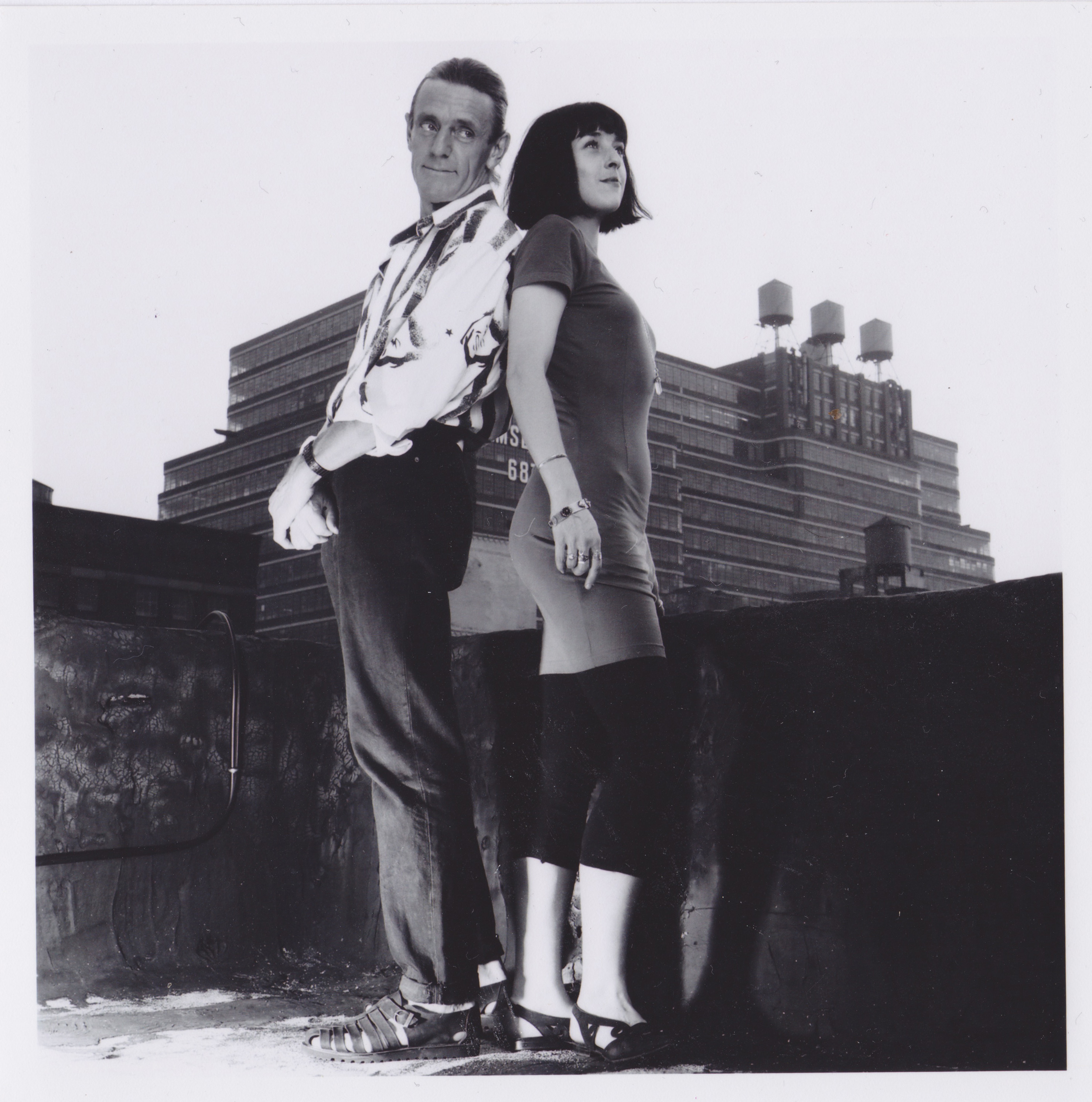 It was great but also tough, as an artist's assistant I existed largely on favours, sofa surfing around alphabet city and cycling to save money. One location that I stayed at was a corner of a Brooklyn gallery space that the regular tenants had sublet out to three of us whilst they vacated over the summer months. Bed was a rectangle of foam behind large freestanding paintings in a space with no windows; I shared this with two other London girls.

Some of the work was out on the streets with murals painted on Lafayette Street and Broadway. 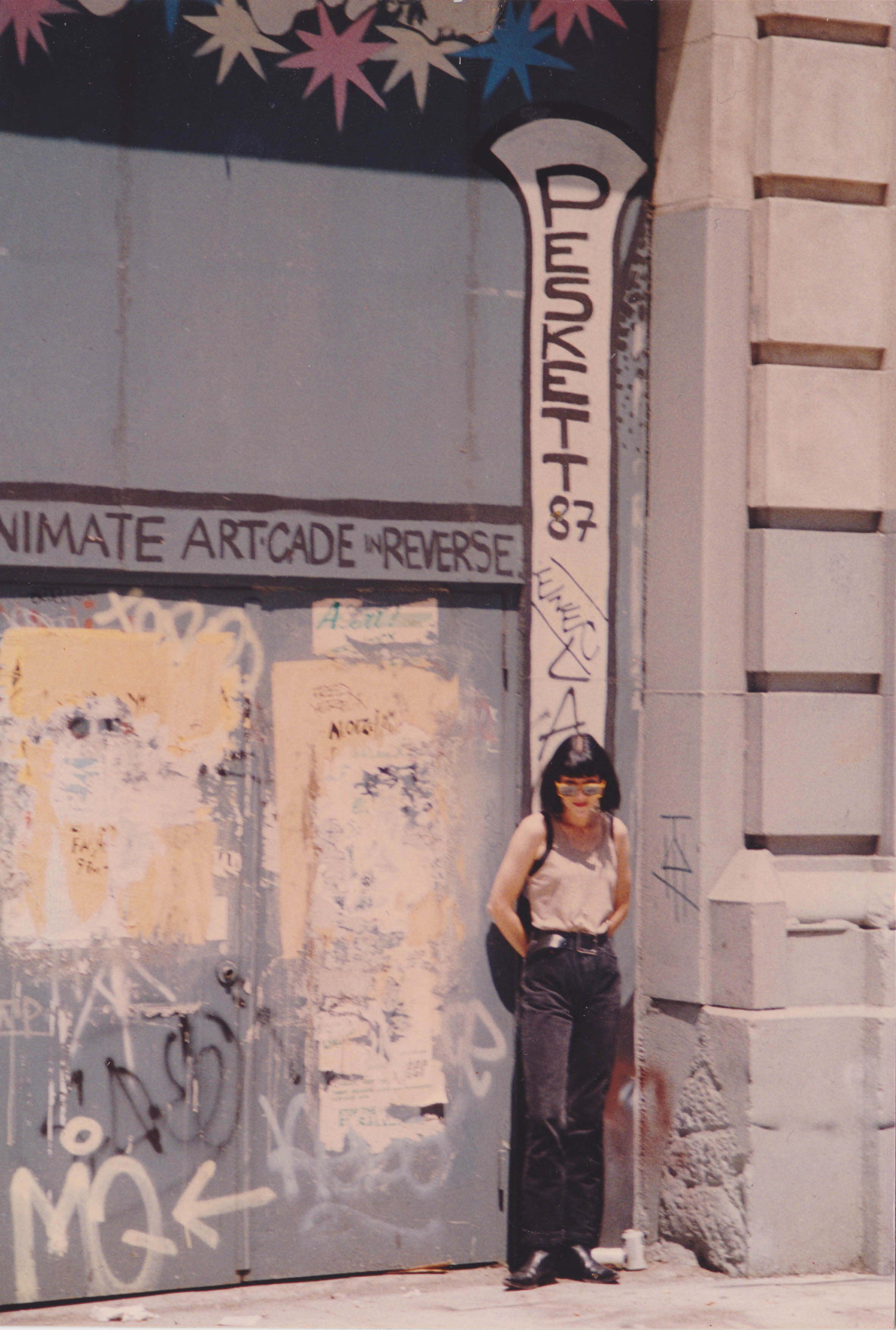 The conceptual side of contemporary art in New York at this time was blossoming; experimental performance artists were establishing themselves within the East Village club scene. Lydia Lunch staged a performance of live, naked urination that to this day, remains embedded in my memory. 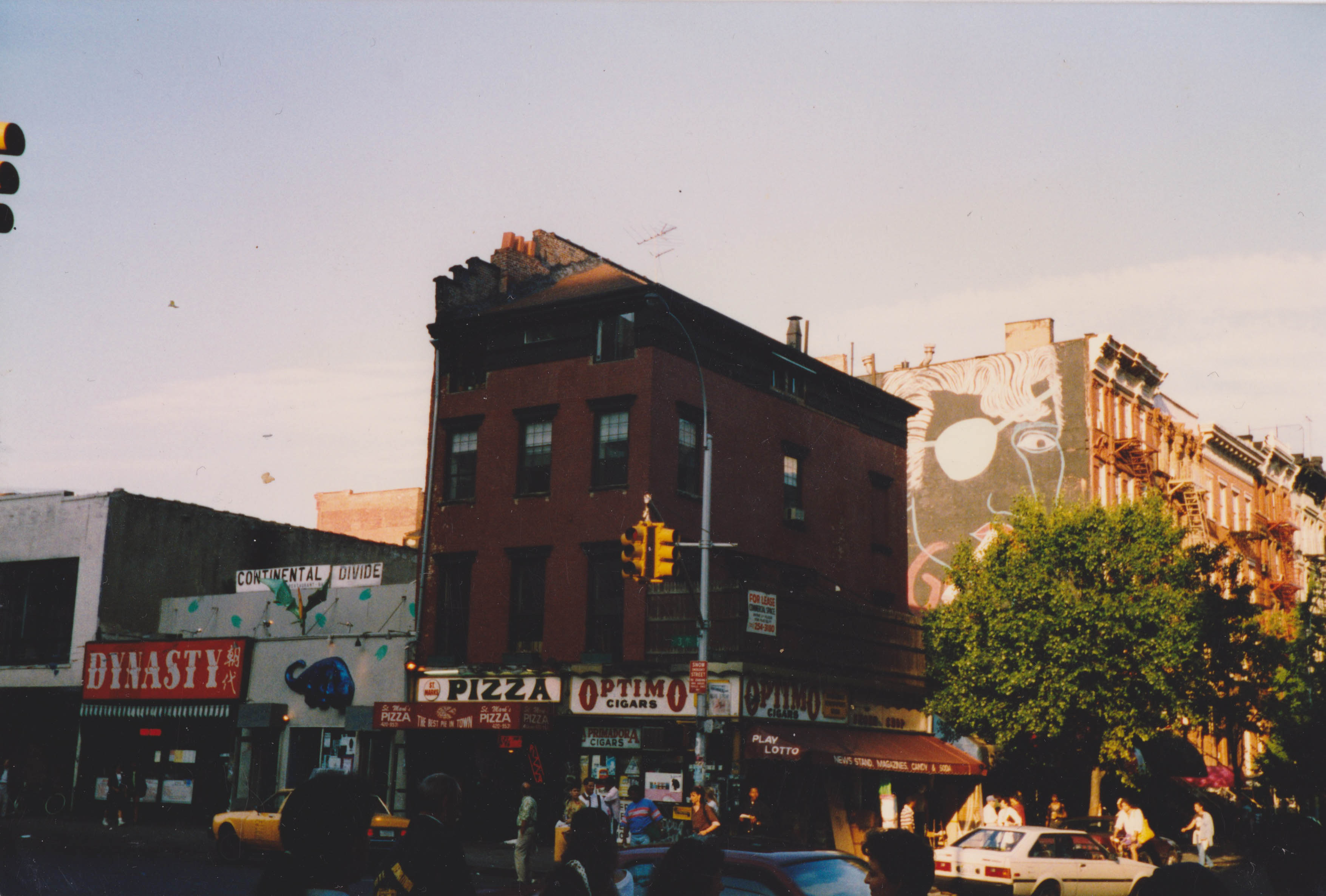 Looking back, I'm glad that I grabbed the opportunity to have those experiences as a young artist.

To sum up, my three-year apprenticeship in New York far surpassed any course I could have chosen in the UK. 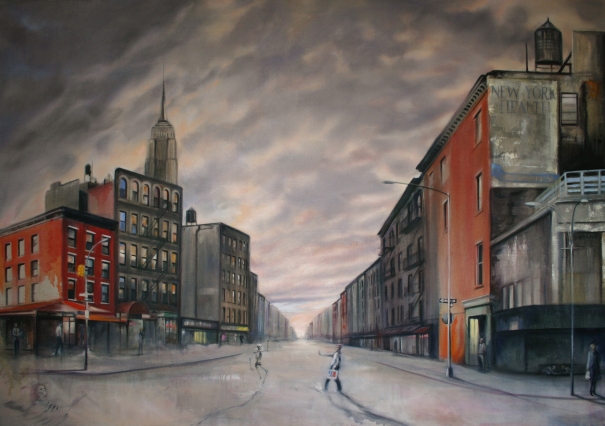 Here's GEORGIA'S FULL PROFILE. And if you want to keep track of the best in Art and Design, Take our ART STYLE QUIZ and BECOME A MEMBER. It is free and you'll get access to the best new art from top Museums, Galleries and Artists.

London born painter inspired by her surroundings.
Georgia Peskett focuses on her observations of t…

London born painter inspired by her surroundings.
Georgia Peskett focuses on her observations of the environment.
Inspired by the everyday, her painting practice is fuelled by journeys with her camera, using photographs to inform the paintings: attempting to capture the essence of a place or moment in time.
Born to artist parents and following a formal education at Epsom School of Art she became an apprentice at an early age to several New York artists.

The paintings have a cinematic quality, often painting barely inhabited scenes that convey the loneliness of the urban landscape.
Her work can be found in many notable collections in the UK and worldwide including Hong Kong, Singapore, Australia, Germany and the US.