Now the dust has settled on the big energetic push that is the annual degree and MFA show season, Charlie Levine looks back and highlights the fashions, the trends, and the ones to watch.

I went into Topshop the other day and had a weird déjà vu moment. All the clothes: from the high waisted shorts, to the crop top t–shirts, the stack heeled trainers, Doc Martins, and the neon jewellery; took me straight back to 1995. Every piece of clothing was almost exactly the same as the ones I wore as a young teenager. The nail in the déjà vu coffin? The store was playing Nirvana.

Trends come and go, fashions repeat themselves and nostalgia flicks the delicate line between the cool and the kitsch with subtle ease.

As with fashion, so too with art.

So, after an exhaustive, and exhausting (!) round of this year’s UK end of year shows, I have been mulling over those trends and themes that cross universities and cities. All appear to be rooted in typical art student tropes: for example I saw classic abstract painting at every show as well as works that played with space and light, and works that used old equipment — such as overhead and slide projectors. I wonder if this is a reflection on the same fashionable nostalgia as shown by Topshop’s design crew? Does it come from the vintage of the lecturers at the colleges? Or is this resurgence of older technologies and approaches a reflection of what is happening in the wider art world, now being trotted out by students across the country?

Just like neon jewellery then and now, the jury is still out on whether these trends will last the test of time, but here are my top five from the class of 2013.

Stacking canvases/Leaning canvases: The most obvious of the five art trends on the list was the stacking and leaning of canvases against the wall, sometimes on coloured bricks, or tiny plinths or made objects. Very much in the vein of Chris Ofili and his dung paintings, or Yelena Popova who recently showed in Saatchi Gallery’s Gaiety is the most outstanding feature of the Soviet Union, this trend was by far the most popular and was executed with varying levels of success. Luke Diiorio and Zoe de Soumagnat from the RCA did it flawlessly and with new twists, especially Zoe with her fruit stands (see illustration).

This trend was particularly obvious at Slade, and was best exemplified by Mollie Anna King and Ayesha Singh. These two artists echoed Rachel Whiteread‘s delicacy and understanding of the medium, and they used it to make large–scale solid, and imposing structures which filled their exhibition spaces and had a high impact. It was also used as a medium to break into, to make crumble, and turn into dust. Concrete, this year, was representative of both strength and weakness, and I predict this trend to keep growing and be seen in artist–led galleries all over the country.

A subtle trend, but one I noted nonetheless in works by Veronica Kendik (Farnham) and Inês Tavares (Central Saint Martin’s). White paper, seemingly with nothing on it, on closer inspection revealed scenes has been embossed into its surface. This idea of something from nothing links to memorable exhibitions including Hayward Gallery’s Invisible, from 2012. At that time, the Hayward explained this trend as seeking “to direct our attention towards the unwritten rules and conventions that shape our understanding of art. Other works invoke invisibility to underscore the limits of our perceptual capacities or to emphasize the role of our imagination in responding to works of art. Some use invisibility as a metaphor that relates to the suppression of information or the political disappearance and marginalization of social groups.” It was interesting to see it used in this way at the final year shows.

This is something I have been noticing rise in recent years, and was a major feature at the Venice Biennale this year too. Wallpapering artists this year included Rosie Black (Camberwell) and especially Catherine Parsonage (Royal College of Art) extending their practice into covering whole walls with repetitive imagery, and as they did so acknowledging their art form’s roots in the decorative arts. While artists such as Jeremy Willett and Karen Mc Lean have been using wallpaper in their practice for years, it really does seem as if 2013 is the year it comes to prominence. I’m looking forward to seeing where artists bring it next.

My favourite of the trends in its immediacy, playfulness and relevance to art today. With boundaries pushed by digital and projected art, this trend sees a truly engaging, subtle, pared back exploration of colour and light. Used to particular affect by product designer Bilge Nur Soltik (RCA) and artist Jumpei Kinoshita (SLADE MA), this idea of a white frame on a white wall emitting colour from behind, engendered purely by the paint on the reverse of the object, completely captured me. Like the work of Donald Judd before them, these objects question space, medium, effect and our emotion. And, just as with Judd’s simple–seeming, yet utterly compelling objects, I was completely excited by these works and their potential. 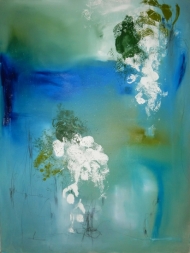 City Layers (Interlaced I) by Jaykoe 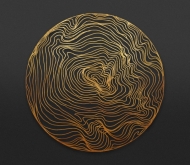 April (The 12 Months) by Alexander Grigorev