Tailoring patterns are ultimately a means to an end. They are technical mathematical drafts developed since the later 1500s, drawn on various kinds of paper, to construct structured clothing. In effect patterns can be viewed as the blueprint of the final product, and are simply 2D abstractions of 3D clothing. They carry with them the outline of the garment, and a representation of the body. The artist proposes a new interpretation of tailoring patterns as interesting abstracted drawings of the human form that have an inherent aesthetic quality that can innovatively be used to develop a contemporary art practice. 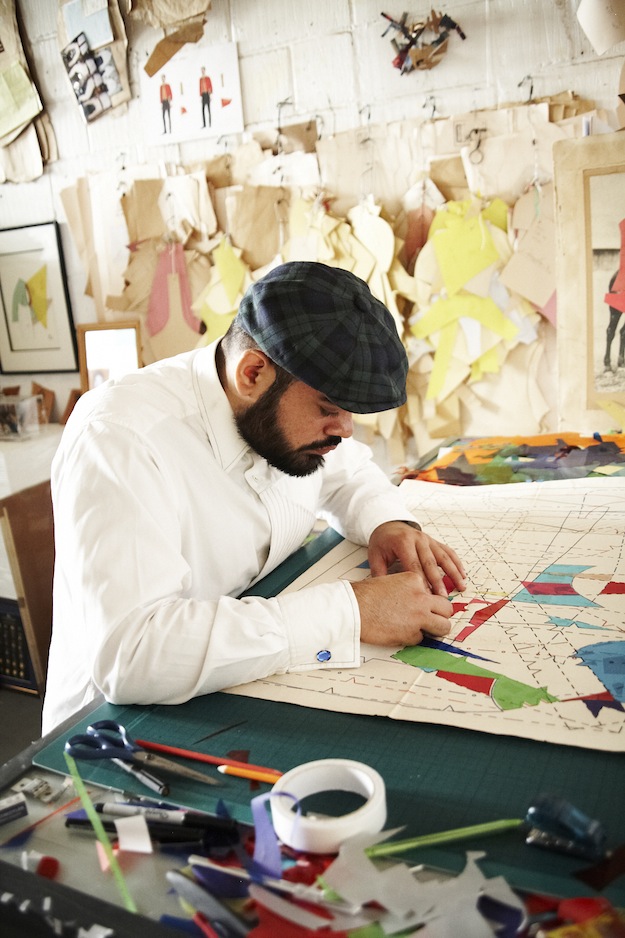 The ‘body’ plays a reoccurring theme in Narielwalla’s practice since the conception of his artist book Dead Man’s Patterns (2008) inspired by a set of bespoke customer patterns of a customer deceased. The photographic sequence of the making of the actual garment is charged and ghost-like within the context of the title Dead Man’s Patterns; the presence and absence of the person is evident. Each section of the book suggests different physical states of the ‘man’ with a sense of formal preparation for burial. The actual physical man is never there; the pages suggest something quite intimate even though they are merely paper.

In his most recent series Le Petit Echo de la Mode the female form is shattered into precise overlapping facets, flattened not as views of a subject but as the object itself made from a pattern sheet. As a composition it does exactly what the Cubists were trying to achieve, painting pictures that compress the sensation of all faces of an object simultaneously into one image. Art Historian Arnason in the History of Modern Art (1988) explains ‘that cubists like Picasso and Braque broke ancient system’s fixed, unitary, hierarchical focus into democratically multiple perspectives, they created a mixed or composite image, presented as if viewed from many different angles at once’. In this context it is significant to position tailoring patterns as relevant 2D flat representations of a 3D body. Like the Cubists, tailors analyse bodies and produce a drafted mathematical pattern that can be viewed as the entirety of the body. Tailoring patterns such as the Le Petit Echo de la Mode can be viewed as artefacts in themselves as they present every facet of a garment, and inevitably the body along with it, on a single sheet of paper. They motivate the artist not to cut and detach, but to leave the image intact and explore the multiple aspects and angles of the body by filling in the planes. In the process this becomes a realisation of the Cubist philosophy. The history of these radical original pattern abstractions from the magazines (1897–1983) and the history of pattern cutting (1580 onwards) predate the Cubist movement.