...And we’re back. As London’s commercial art world begins to fall into some semblance of normality, it is clear that some things have changed for good. For example, almost every gallerist I have spoken to in the last few months has committed to continue with an online programme of some description. The last year has taught dealers the importance of being global in outlook and reach, allowing viewers and collectors all over the world some degree of access to their exhibitions, be that through full blown VR experiences or simply improved photography and video content.

On the opposite side, months of being stuck indoors with nothing to stimulate the mind but endless online viewing rooms has led some to open new physical spaces during lockdown. The following four galleries have all come to exist in their current form during the last 12 months, surely a positive sign for the health of the physical exhibition as it recovers from many months of lockdown. 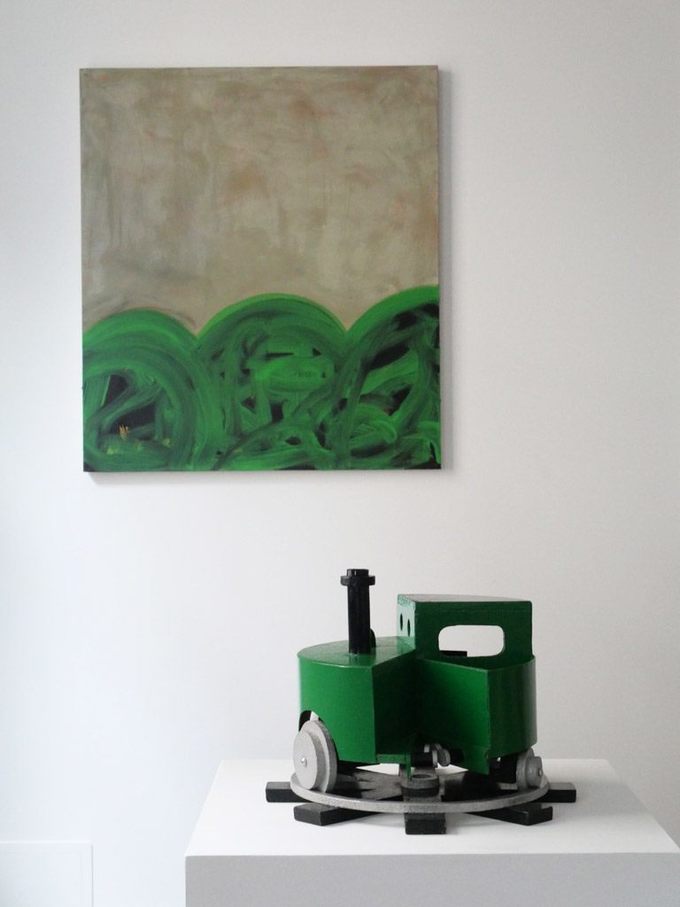 Art critics are tasked with having and sharing an opinion on the content of a world of which they themselves are also a part. Of this task, Adrian Searle once commented “no conflict, no interest.” The implication of this is that the only reason why a critic might want to write about any art-world phenomena (for example, an exhibition) as an opinion-haver is that they have some stake in it as a part of the art world. I will leave you to make your own mind up on the truth of this claim whilst I tell you about the inaugural exhibition at Rise Art’s new Berwick Street space.

Throughout 2020, many predicted a “clicks and mortar” approach to gallery programming becoming the dominant one post-pandemic. For most dealers, this meant hiring some developers and polishing their online presence. For us, it meant re-evaluating our relationship with the old fashioned way of doing things. We decided that opening a gallery space with a programme sitting adjacent but separate to our online presence would allow us to deepen our relationships with artists and collectors, as well as giving us the opportunity to support members of our roster of emerging artists in developing their CV’s and collector bases. 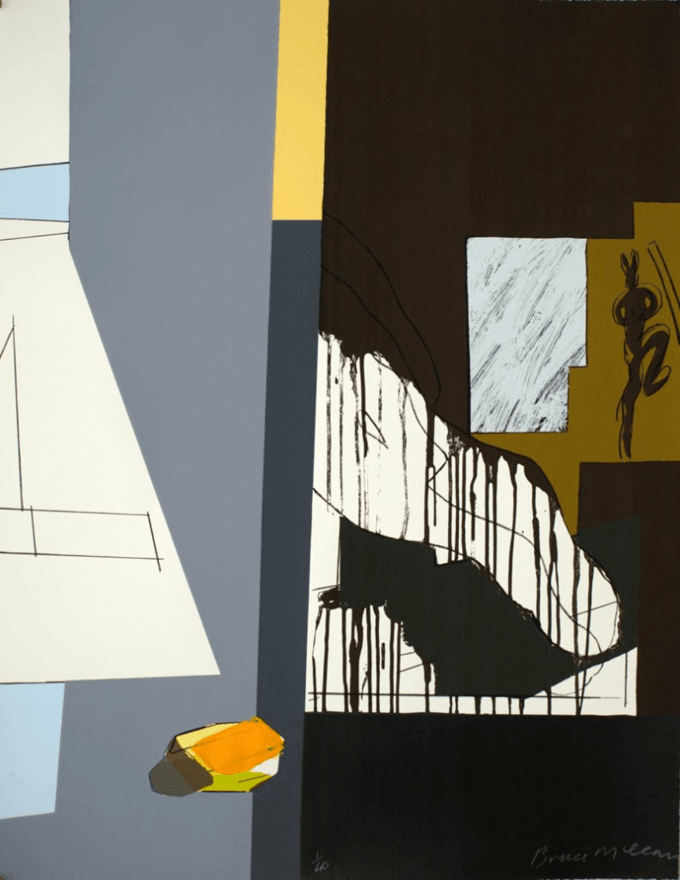 With that being said, the irony of opening a gallery in the middle of a pandemic wasn’t lost on us. This is why our maiden group show focuses on paradox and absurdity, asking what happens when we embrace the surreal and the nonsensical. The exhibition features work by Bruce McLean, KEELERTORNERO, Amy Dury and Joe Hesketh among others and will be open by appointment with a parallel online presentation from May 6th.

Evie O’Connor, What Will Become of Us?, Taymour Grahne Projects Notting Hill (May 15th - June 18th) 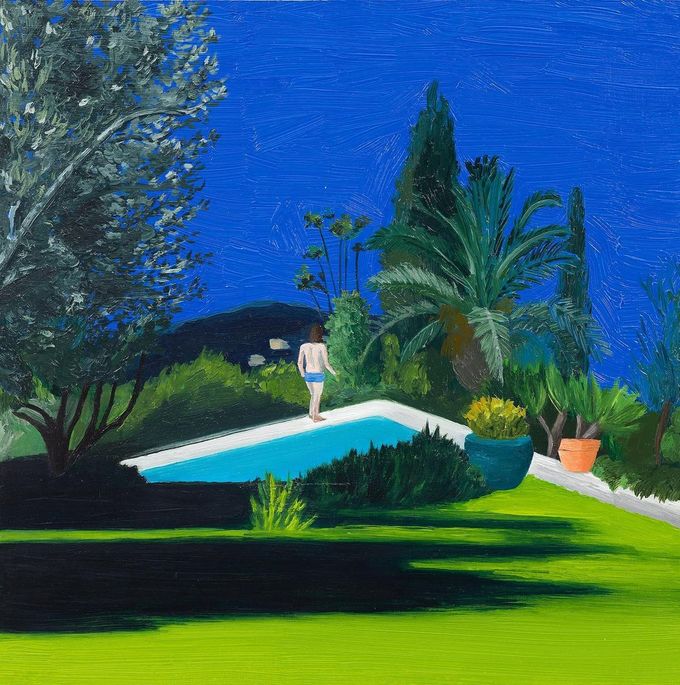 Côte d’Azur by Evie O'Connor in What Will Become of Us?, courtesy of the artist and Taymour Grahne's Instagram

Taymour Grahne, who opened his first gallery in Holland Park back in 2020, is doubling down on his vision with a new space in Notting Hill. It opens this month with a solo exhibition by London-based painter Evie O’Connor.

Her naively rendered oil paintings depict the trappings of the luxurious side of the art world: Damien Hirst picking lemons in Venice, a sushi platter, a poolside party, a 40 euro negroni. The colours are bright and the artist’s hand is present in the works - they are far from cold and mechanical. However, an overwhelming sense of emptiness pervades the show. Looking through this window into the upper echelons of the art market, the azure swimming pools and plates of oysters, the question that comes to my mind is not “how do I get here?” Instead, I find myself wondering what the point in all of it is. Are these paintings just records of empty consumption and vacuous excess?

The subjects of the exhibition - a small community of elite dealers, collectors, artists and hangers-on - would likely say no. The point in all of it, they might argue, is the art. Ostensibly, the reason for the parties, dinners, poolside afternoons and other scenes depicted in this exhibition is a passion for art. This makes O’Connor’s work playfully circular. Like a low beam bearing a “mind your head” sign, her paintings read as a warning about the sun-kissed elitism that they might end up being the source of. 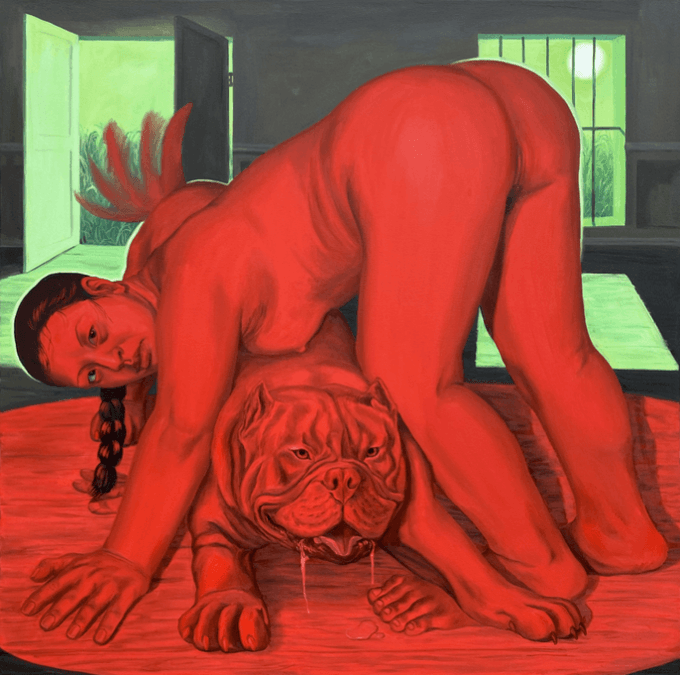 狗女人放狗屁/Dog Woman Releasing Dog Fart / The Bitch is Non-sense by Amanda Ba in Get a Load of This!, image courtesy of the artist and Artsy

Thankfully, not all art world activities take place in five-star hotels over seafood dinners. The domestic gallery sits at the other end of the scale, and has long been an understated but very much viable option for the showing and selling of artworks. For example Jay Jopling, now known for being the founder of White Cube, started dealing in the 1980s out of his Brixton Home. More recently, Laure Genillard’s eponymous gallery and Stephanie Baptist’s Medium Tings have hosted programs in their proprietors’ homes. After running a more traditional gallery in North West London since 2016, Daniel Levy followed suit last year, relocating his operation to an appointment-only domestic space in Marylebone.

This exhibition, curated by She Curates founder Mollie E. Barnes, features 25 women and non-binary artists. Between them, the works on show envision an inclusive and far-reaching definition of femininity. For a long time, women have been present in modern art largely as subjects defined and constituted by the singular and pervasive gaze of male artists. In 1989, feminist collective Guerilla Girls reported that less than 5% of the artists in the Met’s Modern Art Sections are women, but 85% of the nudes are female.

Multiplicity is built into this exhibition’s curatorial ethos: the artists come from around the world and their works vary in medium, style and subject matter. But its consistent theme is a celebration of self-identity and self-representation. I’m not sure how much museums’ gender balances have changed since the 80s, but the art world certainly still has a long way to go in terms of allowing women and non binary people to visually speak for themselves. 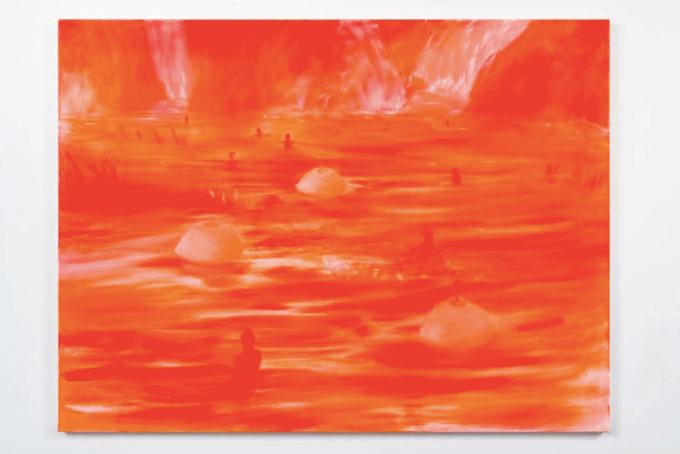 Sunday 5am by Amy Steel in How It Happened, image courtesy of the artist and Niru Ratnam Gallery

Niru Ratnam, who had been working with Berlin’s KÖNIG Galerie until early 2020 also chose last Summer as a time to relocate. With a new Soho gallery whose program focuses on women and artists of colour, he too is doing something to give underrepresented artists a voice. The dealer’s impressive provenance and upright programming strategy pass him with flying colours in my book before even looking at the art itself. It’s good news, then, that the work on show is equally encouraging. Hot on the heels of an exhibition with Lydia Blakely, the gallery’s upcoming solo show features work by fellow Goldsmiths and FBA Futures alum Amy Steel.

The exhibition is a joy to look at. Steel deftly navigates the space between the artwork as being valuable in its representative abilities and the artwork as being valuable as an object in itself. She lets the viewer celebrate the materiality of her medium whilst also using it as a tool to invite us into a world of her imagining.The artist paints dynamic seas, reflecting harmonious combinations of purple, orange and blue and hosting characters who are at once charged with so much movement and stillness, certainty and anxiety. More impressively, nothing on any of the canvases is trying to deny that it is ultimately a simple and intuitive flick of oil paint.

I received my education in art from a world of anti-formalism and dematerialization that placed conceptual rigour so far ahead of visual presence that I accepted the view, as Tom Wolfe puts it, that “paintings and other works exist only to illustrate the text.” Looking at Steel’s paintings, I feel what I imagine 19th Century critics felt when praising the early Impressionists - a happy return to the simple but endlessly generative relationship between paint and canvas.

This isn’t to say that the ideas behind the works, the part that the conceptualists who taught me would prefer to talk about, aren’t also fascinating. But I hope that you have been convinced to see the exhibition for yourself, and will let the gallery text do the talking on that front.