Barbara Rae: Documenting the margins of the world

Getting lost in any one of Barbara Rae’s paintings is almost unavoidable. Whether drawn to the atmospheric blues that linger in the background, or focusing on the complex arrangement of shapes that occupy the foreground, Barbara manages to seamlessly immerse the viewer into the atmosphere of her art at every turn. We examine just how Barbara’s work generates both familiarity and intrigue whilst transporting us to the very ends of the earth.

Barbara does not see herself solely as a landscape artist. Nor can she strictly be defined as an abstract artist. Instead, Barbara approaches landscapes in an abstract style to create artworks that contain so much more than one single landscape. With the unique ability to capture the essence of a place whilst transforming it to an image of block shapes and dynamic lines, Barbara’s visual language has led the way for a new means of capturing nature. 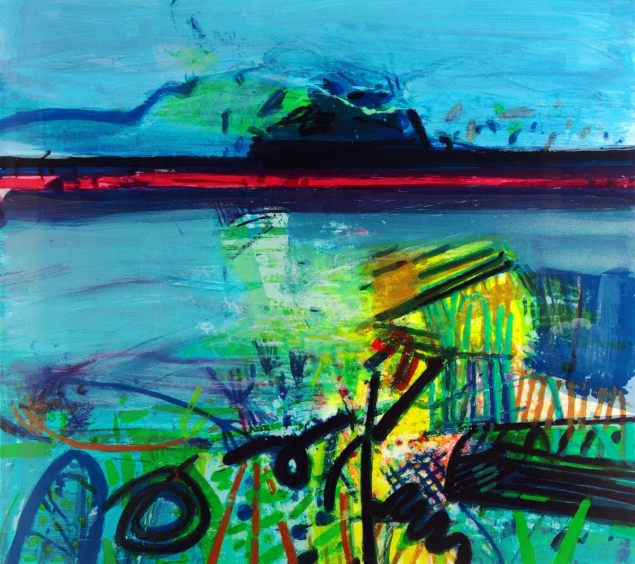 Barbara’s art demonstrates a collection of journeys and experiences throughout the world. Sometimes commenting on the mark man has made on nature, and at other times zooming in to the history and memories of a place, Barbara’s representation of the world is evocative and intriguing; it prompts personal associations whilst gesturing at a story that lies beyond the canvas.

The subjects and settings that inspire Barbara’s art range from the Arctic to the British Isles, from rolling hillscapes to glowing deserts. Whether capturing far flung vistas or shining a light on less commonly appreciated landscapes, Barbara is drawn to documenting the margins of the world.

Having visited the Arctic four times in three years, Barbara is fascinated in retracing the past when researching. Barbara states, “I’m interested in the memory of the land – starting with prehistoric peoples, how they learned and survived.” Various pieces in our collection showcase Barbara’s intrigue in the Irish landscape, ranging from the vibrant blues of Achill Beach to the marine life that sits off the coast of Ballinskelligs. These two pieces, together with the rest of our collection, showcase Barbara’s ability to submerge moments of frenzy in serene pools of calm.

Barbara tends to follow the same approach when constructing the compositions of her paintings. Adhering to a fairly traditional feature of a landscape painting, Barbara includes a clear horizon line in the vast majority of her artworks. At times shaping a backdrop of rugged mountain tops or adding the curve of a luminous moon, Barbara allows for subtle signals of formal characteristics to contrast with the looser and more energetic approach that takes centre stage towards the front of the canvas. 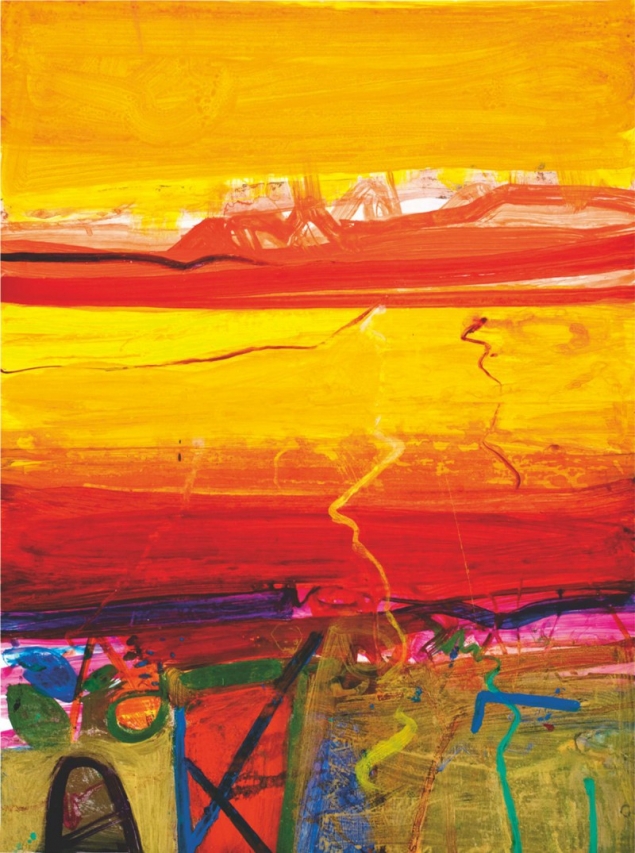 Barbara basks in the vastness and versatility of nature and adapts her palette accordingly. Colour is integral to the mood of each piece, sometimes creating dramatic scenes of saturated block colours, and at other times focusing on a darker shading. Pueblo epitomises Barbara’s bold use of colour, with its fearless electric blue amongst clashing oranges, reds and turquoise. This piece emits heat and life, much like Lacken Cross and Ceanthru Thaidhg.

On the other hand, Barbara’s darker, more atmospheric pieces use a limited palette, whilst still capturing the essence of a place.  The majestic red of Vaucluse creates a scene of movement and emotion, with the obscurity of the backdrop signalling to the time of day. Dead Sunflowers similarly draws on the timing, using colours that typically convey stillness and peace to denote chaos and a somewhat ominous subject.

Colour and shape give Barbara’s paintings an immense sense of depth and personality. The places Barbara depicts appear other-worldly, yet still so tangible and reachable. Her impressions of landscapes are documented through bright colours and sharp shapes without flattening the space at all. Barbara’s fast and instinctive process of adorning sharp shapes with flickers of bright colours still appears considered, intricate and at times intimate. 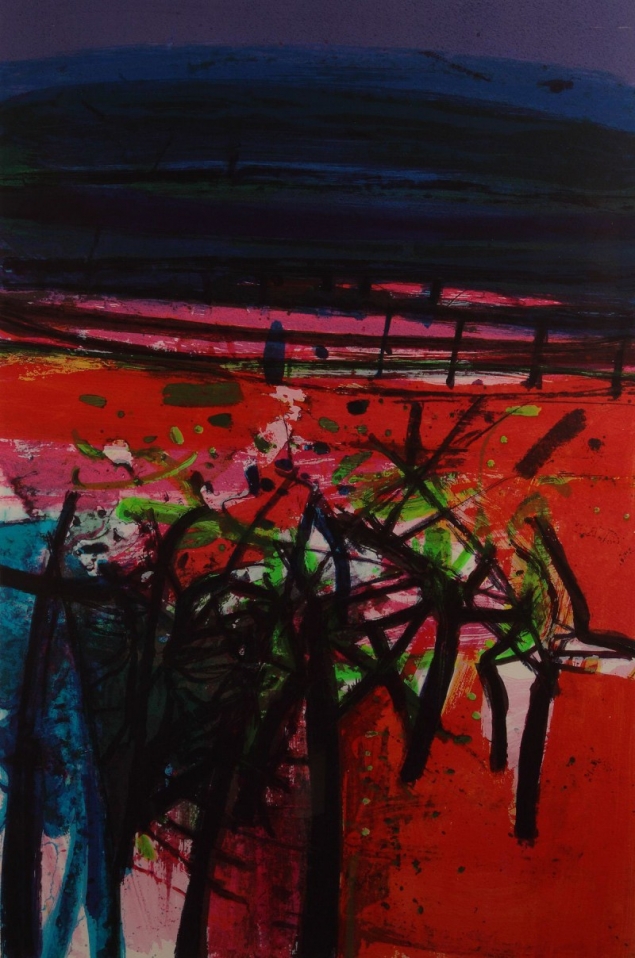 Barbara’s use of layering makes for work that is both textural and rich in detail. Whether covering thick lines in translucent washes of greys, or adding patterned motifs across contrasting planes, Barbara creates work that appears as a continual process. The sporadic clusters of lines and shapes that characterise Barbara’s art generates the viewer’s intrigue, encouraging us to look further into each piece. Barbara often signals at life within these landscapes. Fish and houses are the most noticeable signifiers of living existence, encouraging us to detect elements of familiarity in Barbara’s art.

Barbara’s interest in documenting the margins of the world is not necessarily an interest in depicting wilderness or untrodden lands, nor is she idealising the beauty of the natural world. Instead, Barbara’s focus lies in capturing the character of a place, with all its complexities, its layers and its ambience. When we are look at Barbara’s art, we are not looking into the great beyond, we are looking at the emotion and the spirit of a place. 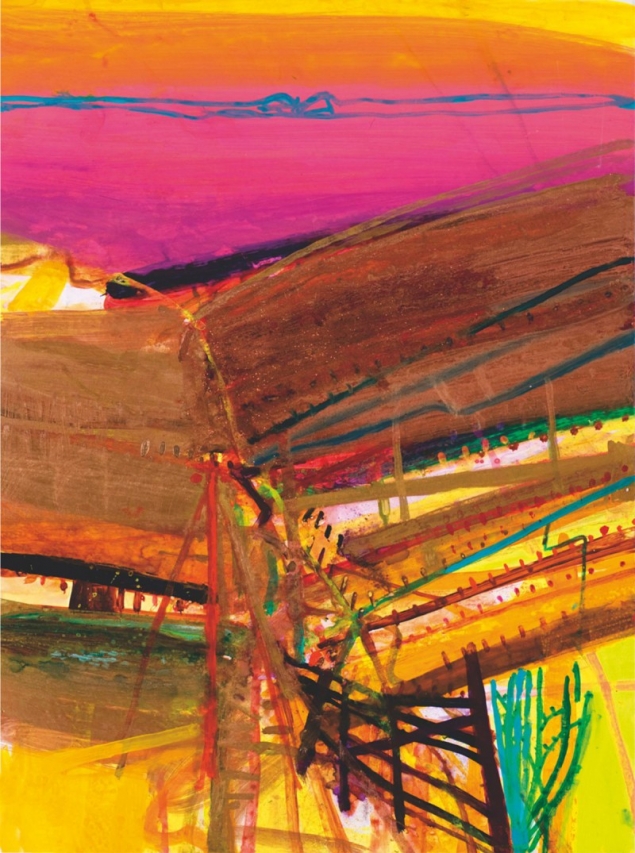 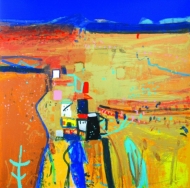 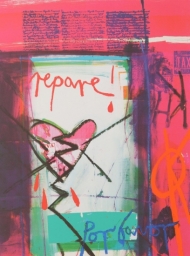 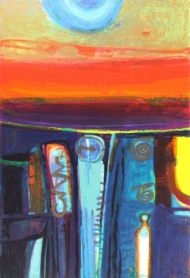 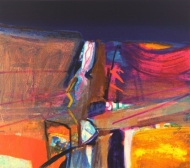 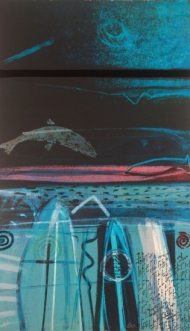