Today, we introduce you to Abigail McDougall, a talented painter based in Bristol and working from the renowned Jamaica Street Studios. Through an interview, Abigail has greatly accepted to share with us her thoughts on Art and on her artistic life... 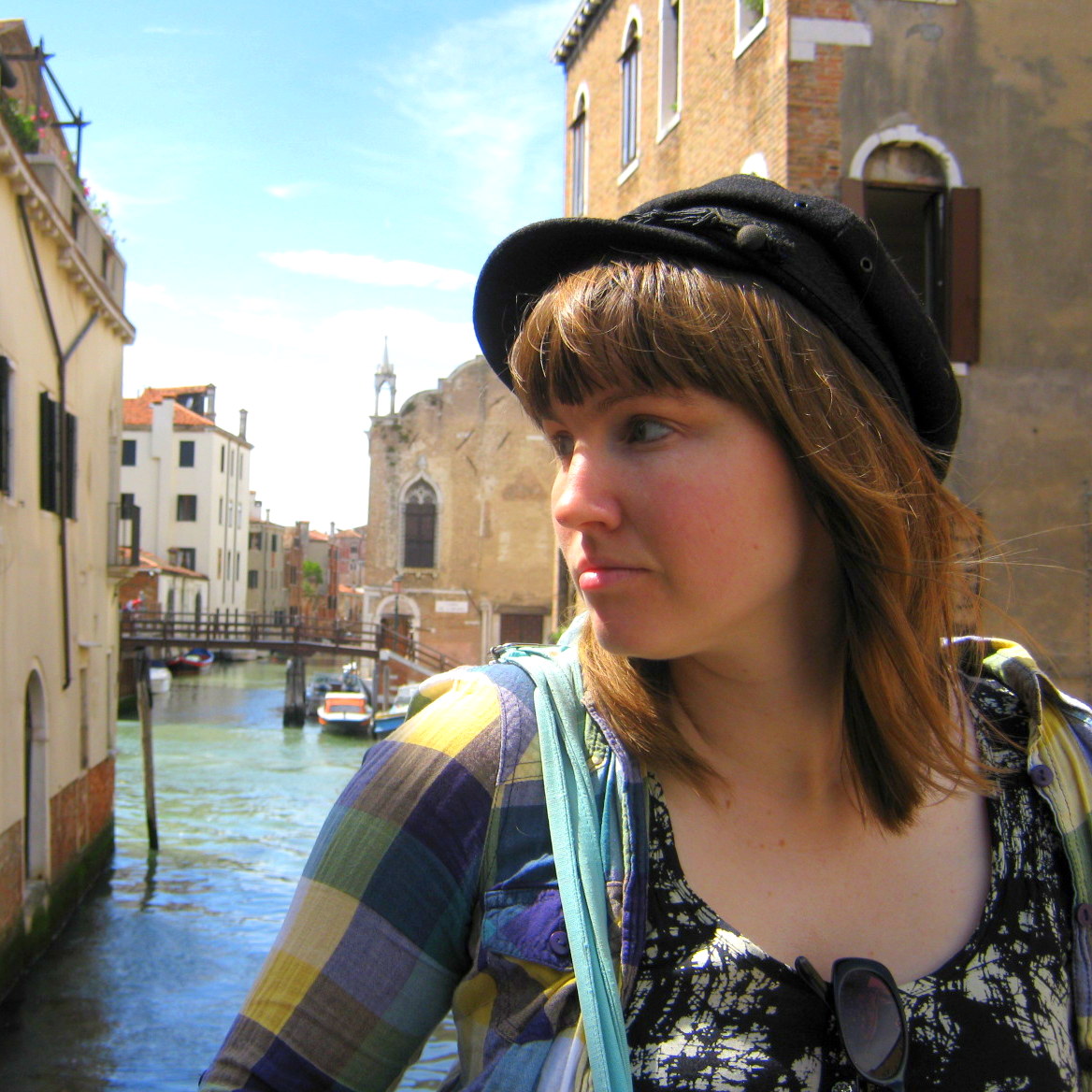 
What got your practice started? When did you decide to become an artist?
I've been painting and drawing since I was very young, I always had very good teachers at school and parents who encouraged me. I got given a set of Derwent watercolour pencils with an instructional video when I was about 10 so I suppose that really got me going with my watercolours. I entered a national art competition when I was 12, came highly commended and had my painting auctioned at Sotheby's for charity. When I finished school, my art teachers wanted to buy a couple of my paintings to give to the headmaster as a leaving present. I then went to the School of Oriental and African Studies to study art history and archaeology and arabic, but quickly realised I wanted to go back to my practical art, so left and went to do my foundation year at The Arts Institute, Bournemouth and then my degree in Falmouth. When I graduated I moved to Bristol with some friends, I wanted to pursue my music that I had begun while at uni and thought Bristol would be a good place. My friends started getting studio spaces in Jamaica Street Studios.  They let me put some pictures up at their open studios and I sold a few. After that I knew I had to get a studio space there and just keep doing it. I started exhibiting all over Bristol, then beyond, in places like Bath, London and abroad.

What artists do you feel have most influenced your practice?
Charles Rennie Mackintosh for design and amazingly stylised watercolours. David Hockney for his inexhaustible experimentation, but faithfulness to painting and mark making. Jane Corsellis and Paul Hogarth because I grew up with their paintings in the house. Paul Klee for his colourful blocks and expressionism. Luc Tuymans, Peter Doig for their atmospheric contemporary minimalism.


Where do you go for inspiration when starting a new project?
I usually go for a long bike ride, usually along Sustrans and National Cycle Network routes. My favourite routes are ones along canals and rivers, I love painting water (watercolour is the perfect medium for painting water). My bike tours can either be for a day or longer. Or sometimes I go to London and just walk and walk for hours, seeing what I can see. If I'm feeling I need to go further, somewhere more exotic, I go to Morocco, Marrakech in particular. The place has such a dense powerful atmosphere it just transports you away from all your day to day cares. I love north Africa, when I was at school I was very influenced by the watercolours Paul Klee and August Macke did together on their travels in Tunisia. When I finished school my mum took me on a trip to Tunisia to visit some of the places they went to paint.

What music do you have on in the studio at the moment?
My favourite thing to listen to at the moment is Anna Calvi's first album. My friend said to me one day "you've got to hear this woman, she sounds like you" (as in what my music and voice sounds like). The reality is that it sounds like a much more skilfully played and polished version of my music, or what I would have produced if I had studied music instead of art. I guess it reminds me of what my alternative life could have been, or what could still be in the future. 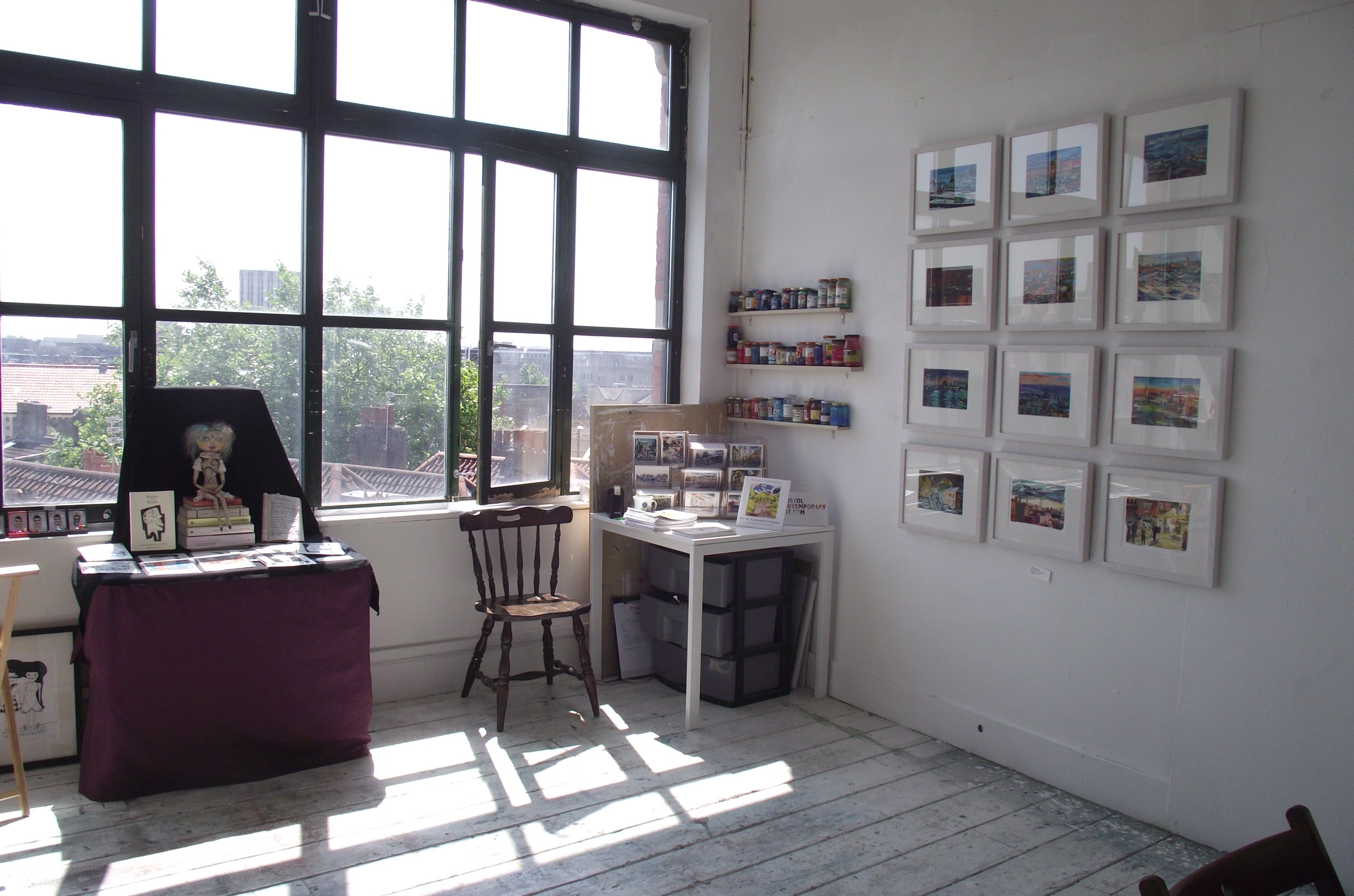 
What work of art would you most like to own?
If it's a contemporary artist, one or two watercolours or oils by Danny Markey. He studied at Falmouth, years before me, that's where I was first introduced to his work. He then had a space in Jamaica Street Studios a few years before me. I'm hoping this means I'm following in his footsteps and will become as accomplished an artist :)
If it's a dead artist then one of Paul Klee's Tunisia paintings.

Which work of yours are you most proud of?
Probably a watercolour piece called "Bristol Burns" that I did in 2011 following the Bristol anti-corporate riots that took place, pretty much on the street where I live. It was one of the most exciting, scary and powerful events I've ever lived through, so I wanted to commemorate it by painting it. The painting itself is quite a contradiction because it is quite a harmonious, serene, nicely composed picture, which is a big contrast to the actual event. 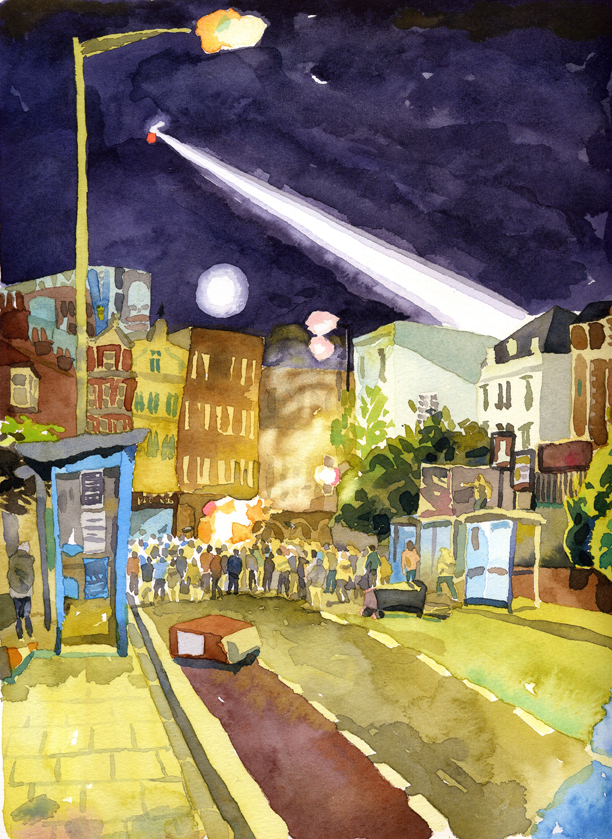 
What's your favourite city for culture?
That's a ridiculously hard question... I'm going to say Bristol because this is where I'm choosing to live at the moment and I think you can probably only get to experience the wealth of a city's culture if you live there. Bristol's culture is plentiful, but bite-size, a manageable amount of it to keep on top of. I am thinking of moving though... Brussels?... Rome?... who knows.

In 3 words, what does Art mean to you?
Light, Colour and seeing

What's coming up in 2014?
My life is so busy at the moment I find it hard to plan that far ahead. Hopefully more exhibitions in London and Bristol... I may move abroad to a different city, start exhibiting there... keep things interesting.

Check out Abigail McDougall's profile HERE. And if YOU'RE LOOKING FOR THE NEXT GREAT WORK OF ART, Take the Rise Art Style Quiz to BECOME A MEMBER and access the best art from top Museums, Galleries and Artists worldwide.