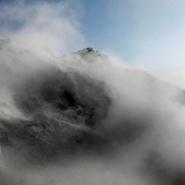 DITTRICH & SCHLECHTRIEM is pleased announce its inaugural exhibition, HORIZONS, the first solo-exhibition of works by Julian Charrière.
Born in Morges, Switzerland, Charrière was raised in the countryside, his early interest in Land Art, in Minimalism, and the experience of architectural model building at the École Polytechnique Federal de Lausanne driving his focus toward the interaction between nature and civilization. Inserting man-made structures into the wilderness, often using natural materials and elements, Charrière began to experiment with with the anatopism of civilization in nature, and moving to Berlin in 2007, continued to experiment with this concept, and its reverse – the anatopism of nature in cities. And in 2010, a trip to Iceland provided a final element that would result in the body of works that composes HORIZONS.