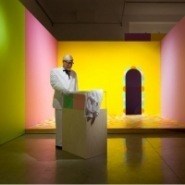 Opening reception for the artist: Thursday, September 8th, from 6 to 8 pm.

The Kandors series, which Kelley initiated in 1999, are sculptural depictions of Superman’s
birthplace Kandor. The popular Superman story recounts the adventures of an alien being sent to
Earth as a baby to escape the total destruction of his home planet Krypton. However, it turns out
that Kandor was not, in fact, destroyed. Shrunk and bottled by a villain, the futuristic city was
later rescued by Superman and protected under a bell jar in his sanctuary, the Fortress of
Solitude. For almost a quarter-century in comic-book time, Kandor and its miniature citizens
survived in Superman’s care, sustained by tanks of atmosphere, a constant reminder of his lost
past and a metaphor for his psychic disconnection from his adopted planet