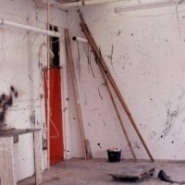 The artists brought together for Escalate Entropy shared a studio in Deptford whilst studying at Goldsmiths College London, between 2004 and 2007. The studio building has since been demolished to make way for new ‘luxury’ apartments. The following paragraph is a story, which re-imagines the current land occupiers in a parallel universe:

At 01000001 housing showroom. 1, 0 and Temp1 sit at the desks of their temporary contemporary office. Temp1 sifts over the digital windows of his morning tasks and hovers upon the updates and social status of friends. A Youtube clip opens unexpectedly upon Temp1’s current page: an animation portraying two cut-out childlike figures embroiled in ambiguous violence, repeated in 3 second sequence. Cut and pasted beyond these figures is a backdrop of planes, mirroring the canal and railway overpass viewed from 01000001’s windows. Amidst the sudden chaos a lethargic daydream kicks in: Temp1 stares past his YouTube encounter, beyond into another 2 dimensional plane: the seemingly flat ceiling tiles suddenly display a holographic resemblance, growing third facets into a sculptural pastel world. Below, the carpet tiles skew, Temp1’s digital screen flickers as a result of the sudden disruption. The emulsion cracks at the dry ceiling edge whilst down below, at the wall/floor junction, paint liquidises once again, gradually filling in the canals left between the carpet tiles. The light from Temp1’s computer display is gradually fading into a monochromatic blank: a screen-sized pixel, dimming like a dying star…

·The ghost space is recreated through interior and architectural features of the studio.
·Artwork from 2004-2007 is re-presented, re-examined or re-contextualised.
·New artwork is exhibited in this re-collection context: an artwork can be contextualised in a historical sense.

The works exhibited here do so between a recollected workplace and a gallery space, in a sense they exist before you, between a 0 and a 1.