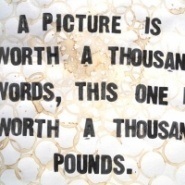 A painter, sculptor and printmaker, Kays has developed a body of works that focus upon delivering challenging messages that range from the hard-hitting to the absurd.
Kays borrows imagery from mass culture, using acerbic world play that renders the notion of a self-contained art object obsolete. For Kays not only is anything potentially art but he also routinely subjects his works to changes affected by the complex aesthetic, psychological, social and economic conditions of today’s experience.
Using a breadth of everyday references with an emphasis on replication, Kays work both relates to and subverts the canon of the Pop Artists of 1950s Britain and America and the Young British Artist movement. He responds to the world of mass capitalist culture by styling himself as the joker; from here he is neither entirely impartial nor wholly culpable, swaying between sincere affirmation and an ironic foreboding.
Between shock headlines and bold by-lines, the modern viewer is exposed to a daily and unending plethora of messages – commercial, political and subversive. Kays challenges the viewer not to passively accept what they see in the gallery or anywhere else.
Hayden Kays lives and works in London; Household Name is his first solo show.