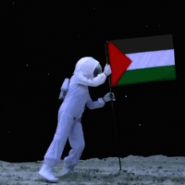 Subversion features work from eleven emerging and established artists who use autobiographical narratives combining fiction, popular culture and subversive parody to express the divisions they face as they perform multiple roles in a society which is frequently represented to the outside world in a contorted and mediated manner. Spanning an array of techniques including installation, video, photography and sculpture, the work illustrates fragments of the distorted imagination that often preoccupies the Arab world.

Emerging Gaza artists and filmmakers Tarzan and Arab will present their award-winning Gazawood project (2010). It’ll include a series of striking cinema poster pastiches of imaginary movies from different genres, and a short film Colourful Journey, which will be screened in a pop-up cinema in Gallery 3. Originating from a region that has not had a functioning cinema since the 1980s and heavily relies on satellite TV and illegal DVD copies, the works strongly reflect the twins’ interest in and passion for film.

In A Space Exodus (2009), Palestinian artist Larissa Sansour adapts a segment of Stanley Kubrick’s 2001: A Space Odyssey, providing it with a new, Middle Eastern context by positing the idea of the first Palestinian in space. Originally developed as part of the A Space Exodus installation, Subversion will also feature Sansour’s Palestinauts (2010) and three preliminary sketches for the Nation Estate project, a sci-fi photo series conceived in the wake of the Palestinian bid for nationhood at the UN.