Rebecca Coleman is a British artist known for her wood engravings and paintings of the London Underground. Rebecca’s works are visually striking and her use of line is remarkably bold. We love the characterful details she likes to include in her depiction of London’s subterranean world. Any city dweller will recognise, for example, the resident rodents that traverse the tunnels.

In 2014 Rebecca was elected to the Society of Graphic Fine Art, which awarded her a Highly Commended Drawing…Show more Prize. She held her first solo exhibition at the Vestry House Museum in Walthamstow.

The artist has exhibited her work at some of the country’s most iconic artistic venues, including the Royal Academy and the Royal West of England Academy. Her engravings are widely recognised and have even been featured in the International Wood Engraving Invitational in Seattle.Show less

Stay in Touch with Rebecca!

"Follow Rebecca to receive first access to new works for sale and the latest updates on events and activities."

Rebecca Coleman is featured in 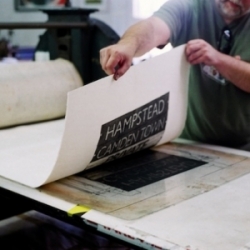