Since graduating from Liverpool John Moore’s University’s painting programme in 1994, Dave White has found success in all corners of the art world, pushing the artistic and commercial limits of animal portraiture. His digital prints display a deep understanding of their subjects, which he imbues with an almost anthropomorphic sense of contemplation. In the last 20 years, his iconic style has found its way onto Nike trainers, cars and into countless important public and private collections.

Dave’s career began with his being given a coveted place in the Royal College of Art’s Northern Graduates Exhibition. His work’s playful relationship with impressionism led him to his inclusion in a slew of group exhibitions with early 20th Century specialists Connaught Brown throughout the late 1990s. Here, his work was often juxtaposed with that of modern masters such as Camille Pissarro and Pablo Picasso. He has since shown across the world, from Art Basel Miami to his own hometown, where he has twice had solo exhibitions as part of the iconic Liverpool Biennial.

In 2002, the artist began experimenting with “Sneaker Art”, following the tradition of blurring the line between fine art and consumer goods started by Andy Warhol and more recently championed by Takashi Murakami. This facet of his practice has led him to collaborate with Nike and Jordan Brand, as well as being featured in the 2018 Philips Tongue and Chic sneaker exhibition alongside Murakami himself. He has also worked with Jaguar, Staple Clothing and Harpers Bazaar.

Unsatisfied with merely depicting his animal subjects without meaningful engagement with the issues that impact them, Dave regularly works with organisations involved in animal conservation. In 2018, his work Fragile, a fibreglass sculpture of a rhino, was put on public show on London’s New Bond Street and auctioned off by Christie’s as part of an auction benefiting wildlife charity Tusk.

You can learn more about the guiding ideas and themes behind Dave’s work in our article Dave White, a new kind of animal art which reflects on how his practice fits into the centuries-long tradition of animal portraiture.

"Dave White has a unique style that transcends all of his work. Vibrant and colourful, his 'Albion' series in 2014 has propelled the artist's career in the UK and Internationally. I love the hand finished elements that adorn the works. Diamond Dust, gloss and gold leaf give his prints and editions a premium element that makes them jump off the wall. Affordable across sizes, these works are great for first time collectors of artwork that are looking for a statement piece for their home. "

Stay in Touch with Dave!

"Follow Dave to receive first access to new works for sale and the latest updates on events and activities."

Dave White is featured in 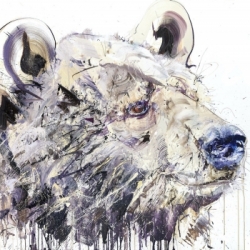