Artist Alexandra Gallagher was born in 1980 in Lancashire, England, and has exhibited widely across the UK throughout her artistic career. Alexandra's work celebrates the surreal and bizarre. Between the realms of memory, dreams and experience, her work looks beyond our subjective limits and often tells a story of inner imagination and thought. With a recent project installing large scale murals for the Blackburn Open Walls street art festival, and curating an exhibition with fellow female artists as part of the event programme, Alexandra takes us behind the scenes sharing her journey to becoming an artist, and how she spends her time making wonderful works of art. 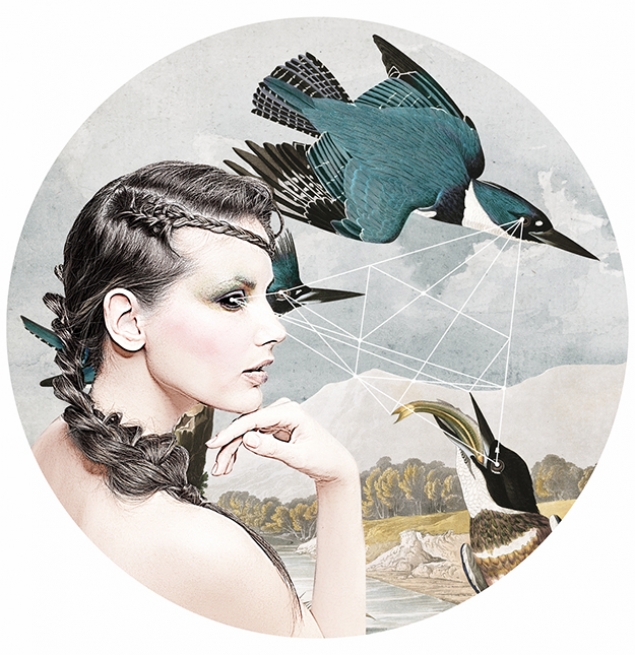 As cliché as it sounds I’ve always created and always wanted to be an artist (apart from that brief moment in 1985 when I wanted to be a pop star who dressed like a punk). My dad is an artist and taught me how to do rip-off Monet’s when I was young, and from that I learned how to use paint and colour. That has kind of evolved into what I’m doing now. 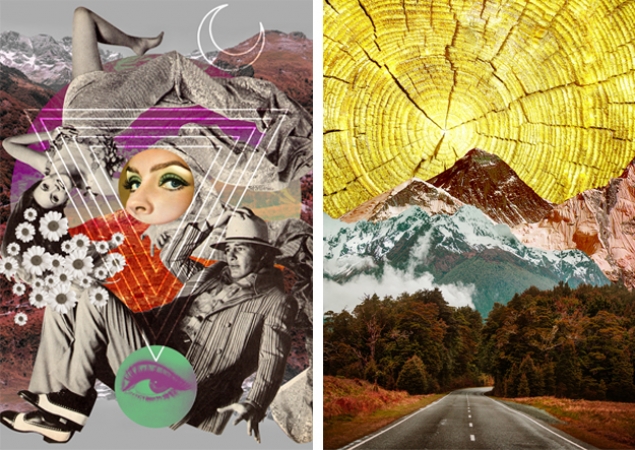 I started making portraits after I finished college, but I get restless easily doing the same thing, so I started to do more of what I liked and began to try out new ways of producing art. I mainly use oil paint and spray paint and I like to mix medias. I often create digitally or sketch out ideas for paintings in Photoshop too. I also like to put something together digitally, print it, work on it with paint and spray paint, scan it and rework it into a piece. It all depends on what I’m trying to produce really. I’m very open to trying out new ways of producing art - I love finding new things and nothing turns me off art more than producing something in a formulaic way. My mind is just not built to do that. Admittedly I can’t keep up with the amount of work I’d like to do - so many ideas, so little time! 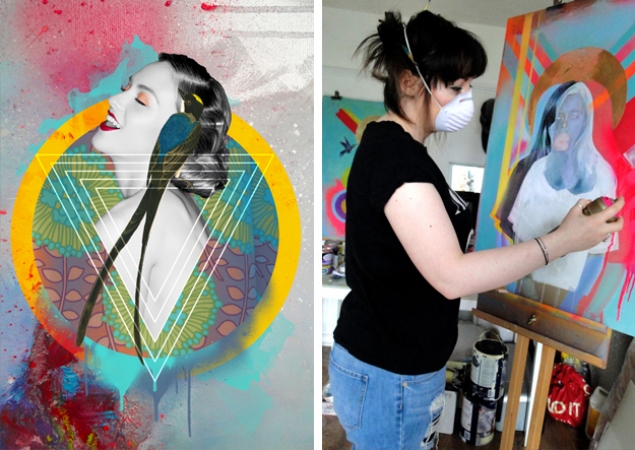 Being an artist, my days are always different depending on what projects I’m working on, although the day always starts the same. I try to treat my day like I would if I had to go to out to work a 9-to-5, but sometimes I do end up working all hours, especially if I’m on a roll. Once everyone is out of the house I grab my huge cup of coffee and make a start. Normally I check the list I’ve written; I write lots of lists because it helps to see what I’m getting done. I use the back room of my house as my studio space, as it has good light and leads straight out into the garden where I also work sometimes, especially when using spray paint or resins. It’s very messy, especially my desk. I try to be tidy, but I just can’t manage it! I have lots of projects on the go and if I’m tidy I can’t work on them all at once. I forget about them. 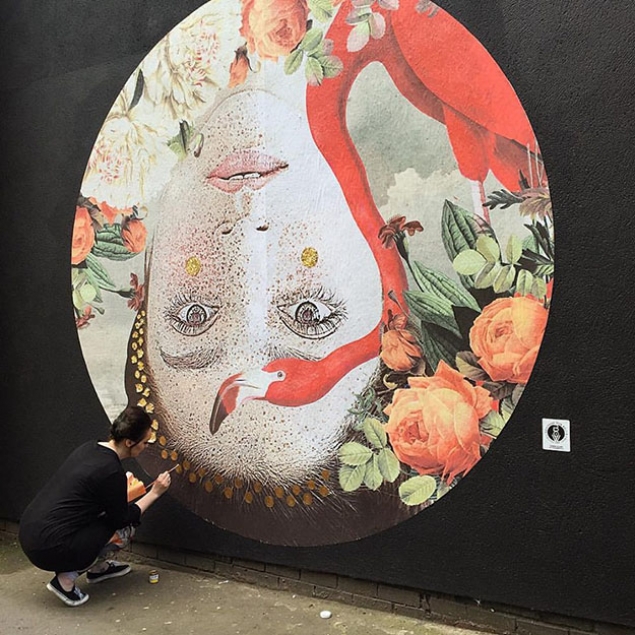 Alex adding some gold leaf to her Freckled Flamingo piece

The past couple of months I’ve been working on the Blackburn Open Walls project, Blackburn’s first walking street arts festival, with fellow artist Hayley Welsh, as well as working with new galleries and sorting bodies of work for exhibition. 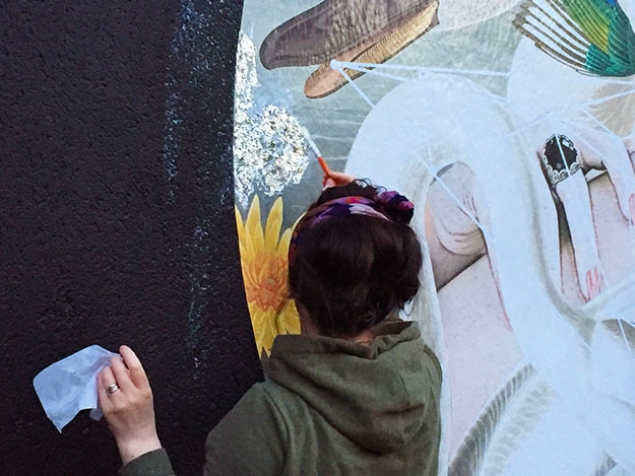 Hayley had approached me with an idea earlier in the year, and asked if I would be interested in helping her curate an exhibition (Limited Edition) to run alongside Blackburn Open Walls. It’s always exciting to work with new people and I love seeing how they do things and to learn new things from them. This project was no different. Hayley’s vision was to create a street art festival that celebrated the town and make it a more beautiful place through art, to create a conversation with the community. The festival also focused largely on celebrating female artists. 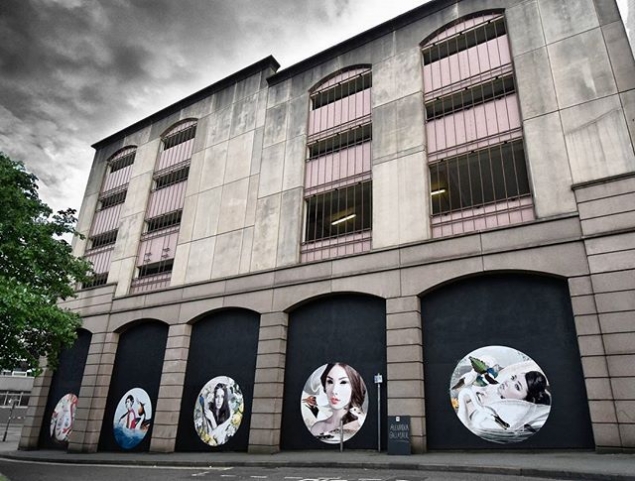 As part of the Blackburn Open Walls Festival, I also got the opportunity to create a piece for the side of The Mall, which was both exciting and intimidating, as I had never created something so big for an outside space before. For the wall, I created five large paste-ups (each 3 metres across) from my Birds with Birds series, a body of work exploring the ephemeral nature of feminine beauty expectations, intricate collages drawing on the issues of feminism, identity and sexuality. The space was made up of five large arches and each piece was framed within the curved semicircles, creating the impression of a gallery of images, each one telling its own story. The pieces were embellished with gold and silver leaf. 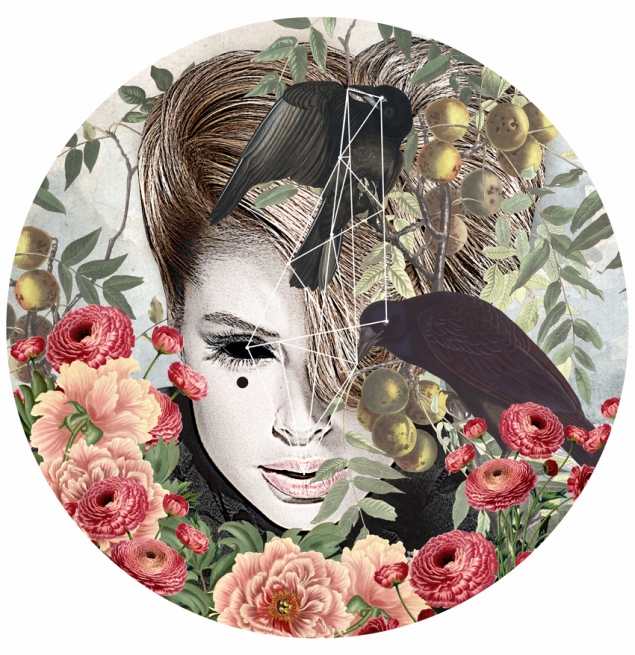 Third Eye of The Crow 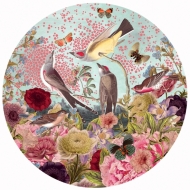 This Land by Alexandra Gallagher 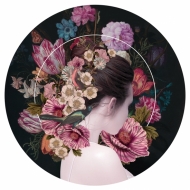 Return The Way That You Came by Alexandra Gallagher 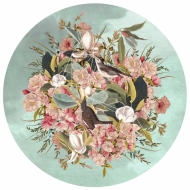 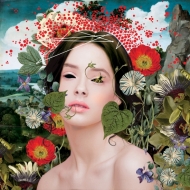 Pins and Needles in My Blood by Alexandra Gallagher 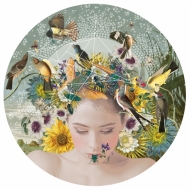