In the studio with Charlotte Evans,

The New York based painter invites us to her bushwick, NY studio.

Tell us a bit about your studio. Located in the Bushwick neighbourhood of Brooklyn, the Wayfarers studio spaces host an excellent collection of artists...

Wayfarers has been here for four years.  George Ferrandi, who opened the space, had a studio below her apartment on Grand Street in Williamsburg.  When she was first there, there was barely a thing around.  Not even a bodega, nothing.  Within a few years, the neighbourhood had radically changed and Fred Perry was forcing her out by offering the landlord much higher rent.  Her landlord offered her this much bigger space in the middle of Bushwick - very little around- at that time, the closest thicket of galleries and artists studios were up in 'East Williamsburg,' still a good few miles away. We were amongst a modest handful of artists' run spaces in the area. We've watched the steady flood of things spread in our direction.  And as new things open up, it's nice to be the established face in the neighbourhood. 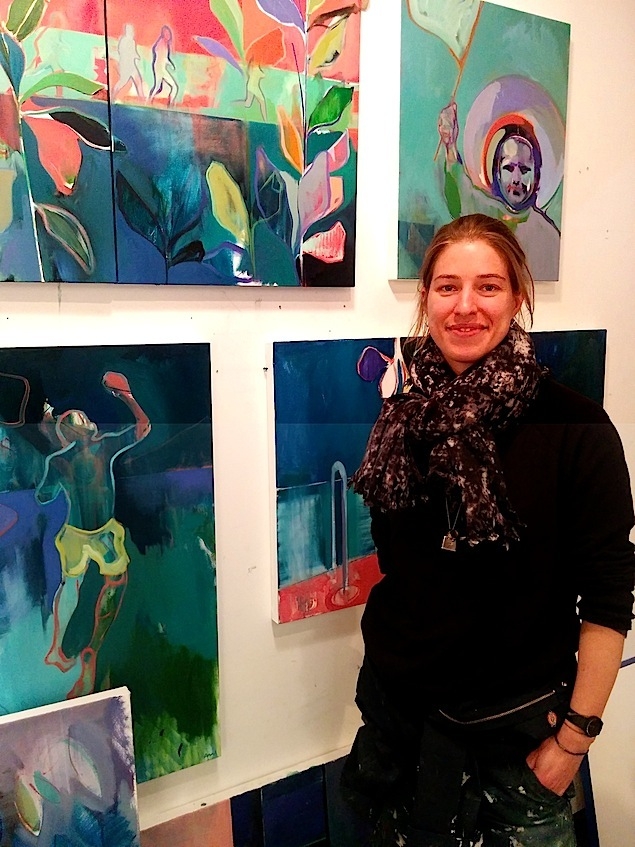 What to you love about the Bushwick neighbourhood?

Walk along the streets and you have no idea that behind a lot of the shuttered shopfronts, there are people working away making things.  There's a vibrancy and an honesty to the neigbourhood.  It's not just artists walking around.  There is such a mixture of things going on....  a lot of tyre flat fix places, and second hand white goods for sale.  But there are also family run hardware stores, pharmacies, dollar stores.  And I think there is a curiosity from the neighbourhood about what we are doing, here. 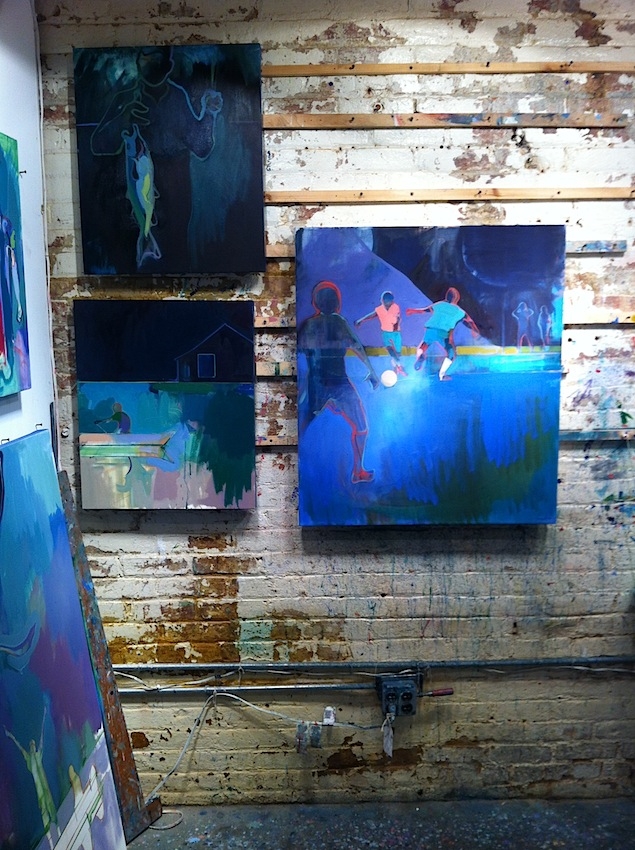 What is your favourite part of the journey to or from the studio each day?

I cycle to and from work most days when the weather allows.  The route takes me right through Bed Stuy.  The neighbourhood is changing to fast, so many things are springing up, houses being done up - much like Brooklyn as a whole.  But every street is different.  Some feel really shabby, lots of gaps in the houses, low rise warehouse buildings.  Not a tree in sight.  While just one street over, it's a different world.  Pristine rows of brownstones, flowers on the stoops, mature street trees.  But it doesn't matter what street you take, if the sun is out, people are out on the street, sitting on their stoops chatting, kids playing, people barbecuing, music blaring.  I saw an old guy this morning, 8am on a Sunday, out in his gingham pjs with a shower cap on, chatting away to his neighbour.  They were having a great time. 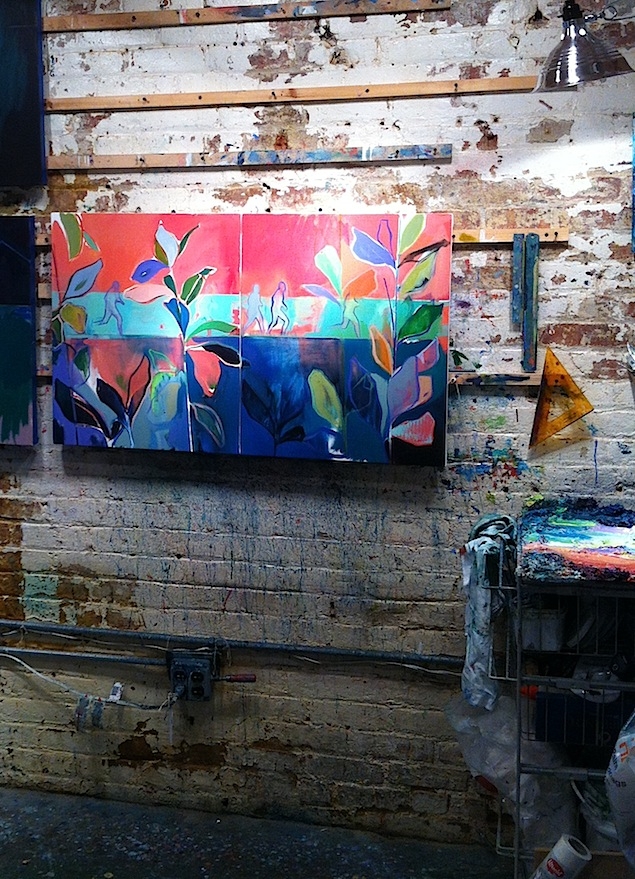 Did anything change in your work when you started painting in this studio?

Yes - a lot changed I think. It's been gradual of course, it wasn't instantaneous. But finding myself surrounded by other people who shared a similar attitude to their work and who valued the process of making the work as much as I do, was huge.  It's given me great confidence.  Talking about my work as I was making it, and talking to people about their processes really helped me trust what I was doing.  I am one of very few painters in the building, but despite that, I feel I have so much in common with those who surround me.  And yes, the limitations of the space were a challenge at first.  We have little ventilation so using heavy chemicals is a no no.  So no turps for cleaning brushes and thinning paint. I had to find alternatives - awkward at first but in the end, I think the work is better as a result.  The texture of my paint has changed, the way I handle the material-   applying and taking paint off the canvas leaving shadows of colour.  Building layers of colour and texture. 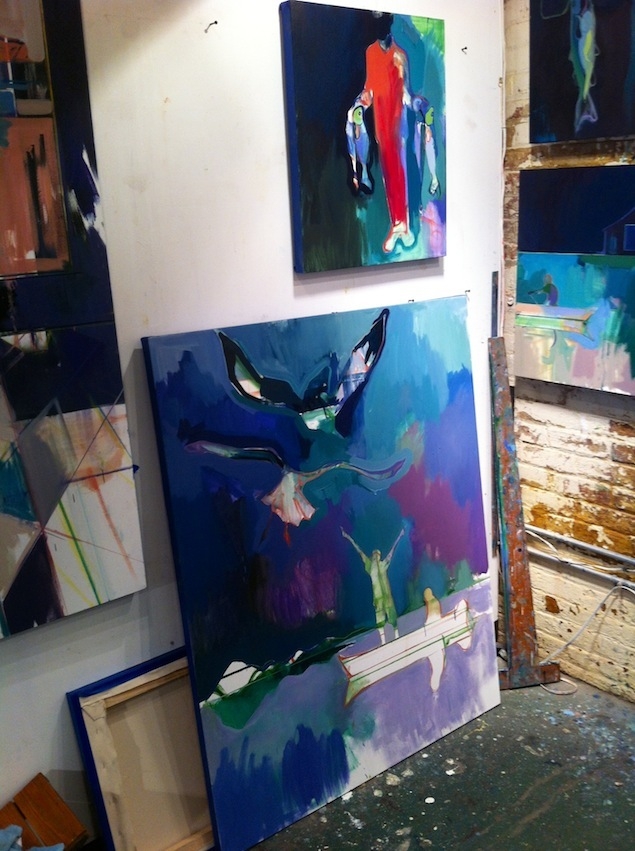 Are there regular triggers for shifts in your compositions?  Or is it an organic evolution from start to finish?

It's a natural progression.  Each painting advances in a slightly different direction of palette or composition.  Some paintings change little in composition from start to finish while others will see a radical shift as I try to reach a point where I feel it is balanced. When this is the case, the intentions I had for a painting when I began can be quite forgotten by the time it is finished. If I feel something is not working I will introduce different things until I find what works, until I reach a point where the tension is right.  And this is the same for palette.  I work on a number of paintings at once so they do influence one another.  Solutions for problems with one painting are often found in another. Some paintings can be quite dominating and stubborn, difficult to steer in a different direction, either of palette or composition.  But working on multiple things really helps break the habits and change the rhythms you can find yourself stuck in with a painting. They are like conversations.  Further paintings, if I haven't had time away from the studio, end up being a continuation of that conversation.  Bigger leaps happen after spells away.  When I have had a chance to see different things, read more, change my own routines. I don't think I am ever not thinking about work, but time not working really does give me a shift in the way I look and think about things. And I think that inevitably shows in the next lot of work I make.

AND AS AN ADDED BONUS, CHARLOTTE HAS CREATED A FILE DOCUMENTING THE PROGRESSION OF HER WORK - WATCH THE MAGIC HAPPEN! 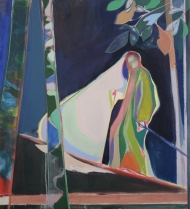 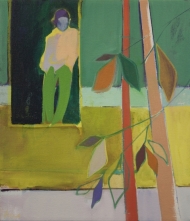 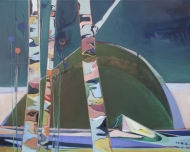 over mountains, through trees by Charlotte Evans 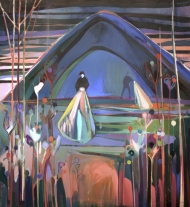 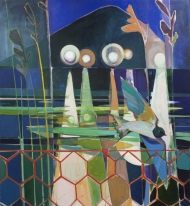