Art on Tumblr - Tumblr on Art

Clara Baez Morandi checks out the Tumblr sites every art lover should follow for the Tuesday List.

The line between the Internet being a tool, and it being a major player in the art game is getting thinner all the time. The awesome Tom Johnsonmakes art that thinks like the Internet, while the hilarious Jeanette Hayes is what you might call an “It” social media personality. Previously, we looked at how artists should (and shouldn’t) use Social Media, but where does Tumblr fit in? There’s Tumblr as Art itself, but there’s also a growing influence by Tumblr on what art websites look like: see Serpentine, Pompidou and the Ikon for examples. So Tumblr is cool, we all got that. But as we also know, the enormous art pool can be confusing, and it can take a while to find the good stuff: so with that in mind, we present the handy Artfetch guide to Tumblr sites to follow:

“When data visualization goes beautifully wrong…” And it does. Get ready for an explosion of, almost always, not very informative data gone arty.

Portland-based artist Zack Dougherty posts some awesome work on his Tumblr. Our faves? The GIF art is unmissable.

Adorable art critic and Artfetch fave, Daniel Rolnik shows the cool art stuff going on in LA and wherever he travels to. He also makes awesome videos. A must follow if you work in art and have a sense of humour.

“Phone Arts is an International collaborative project experimenting using only mobile phone as the medium to create unique compositions. They explore the boundaries of the phone to create graphic illustrations and designs.” Into abstract art and new media? This is for you.

Year of the Glitch

“A glitch-a-day project by Phillip Stearns exploring various manifestations of glitches (intentional and unintentional / staged and found) produced by (digital) electronic systems.” Another one for the visually addicted and proof that Tumblr is perfect to showcase art projects!

In a very structured world (or at least we try) it’s nice to have a bit of chaos. Your brain won’t understand, but maybe you will like?

A cool blog to feed your everyday art hunger.

This is another way of interviewing photographers… Photographers answer questions with their own pictures. You’ll want to read/see them all.

Images you really want to see – you just don’t know it yet. Content from booooooom, the blog, and other stuff worth sharing.

Another good emerging art blog for your Tumblr Feed. 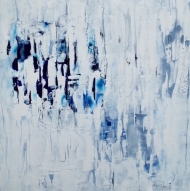