As the Lichtenstein exhibition opens at Tate Modern, Charlie Levine takes a look at the new pop generation and picks her top five for the Tuesday List.

Art died when Pop Art began in the 1950s — or so they say. The explosion of popular culture into our art galleries definitely shifted what we knew and understood art to be, but I’m not sure it dealt a fatal blow. Quite the opposite in fact.

Warhol, Lichtenstein, Rauschenberg, who are all synonymous with this movement, reproduced soup cans, enlarged comic books, and collaged magazines to create utopian scenes of the modern day, and, I believe, breathed new life into the art world and made us begin to question everything, including the every day and throwaway.

My favourite of them all, Roy Lichtenstein (I wrote my A–Level dissertation on him at school), is being celebrated this year with a huge retrospective at TATE Modern (21 February – 27 May 2013), and to celebrate I have picked my Top 5 contemporary artists, whose work nods, bows down to, and borrows from the great Pop Art Masters.

In true Pop Art style Jiri’s inspiration is taken from comic books and cartoons, especially those by Disney. There’s something simple about these, and they act as a highly coloured key to unlock your childhood memories of these cartoons.

Pure Pop, and straight after Lichtenstein, David’s word and symbol pieces are so similar to Lichtenstein the associations are inevitable: an enlarged cartoon caption is still exciting.

Turning trash into treasure, Carly makes old cans, bottles and rubbish out of paper. Though no words are on the objects you instantly recognize products. The works exist as photographs and sculptures, often strewn on the floor. 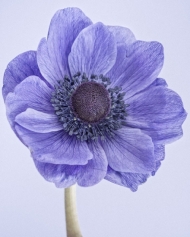 Poppy anemone I by Paul Coghlin 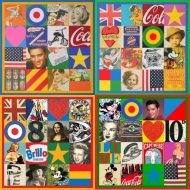