The Opposite of Good Art

By now most avid art watchers (and readers) are saturated with the New Year “best of” lists, but there’s one list that we haven’t seen yet – and that’s a list of bad art. Why is that?

One reason is that it’s notoriously hard to judge: Vincent van Gogh famously thought his 1889 masterpiece, The Starry Night wasn’t up to snuff; while the derision with which the first show of the Impressionists was greeted still haunts art history, hampering those critics who are scared to be the ones to misjudge the next Big Thing. The New York Times pronounced the young Roy Lichtenstein to be “one of the worst artists in America”, and we all know that it’s no fun to have to eat your words. But sometimes things just need saying, so for today’s Tuesday List we’ve decided it’s time that bad art stood up to be counted, and here, in no particular order, are the mixed bag of nominations from Team Artfetch for Worst Art Ever.

Cheesy, spooky, and wrong on so many levels, this was inspired by a Roosevelt speech on the Four Freedoms of America. Apart from the heavy-handed treatment of his subject matter, there’s also the issue that this was mid-WW2, with austerity and suffering across the greater part of the globe. It could also be subtitled “freedom from multiculturalism”, in fact, all it’s missing is a black maid.

This one comes under the so-bad-it’s-good kitsch category. Russian émigré Tretchikoff’s painting of Monika Pon-su-san became one of the best selling prints of all time, and appeared in films and TV from Hitchcock to Doctor Who. This kind of work gives bad art a good name.

Thomas Kinkade, any painting at all… contemporary

Disney can inspire brilliant art that challenges what we see and believe in popular culture (just check out a work by Jaeyeon Yoo), or it can simply mimic, and bore us as it does in the work of this self-proclaimed “most controversial artist in the world.” Prints are bought in their millions, but when it comes to kitsch, they don’t touch Tretchikoff (see above).

The step-by-step painting process and frequent choice of fan-shaped brushes is all too obvious in artworks by this artist. To make matters worse, you can go online and find certified instructors, so that you too can learn to paint his Everest-like snow-capped mountaintops emerging from the edges of a serene lakes!

This isn’t a “worst art”, but it’s our favourite art restoration gone bad. We love that ultimately it had a positive financial impact when the repainted fresco, which Cecilia Gimenez “restored” without permission, became a tourist attraction in the Spanish town of Borja. Gimenez even asked that some of the “royalties” from what became known as the “Potato Jesus” be paid to her.

Anything in The Museum of Bad Art

This Boston-based museum has a great website, and is dedicated to preserving, and celebrating bad art. The Times newspaper listed it in its 2013 run down of the 50 best museums in the world, proving that bad art can be a joy for all. We particularly love Charlie and Sheba, by an anonymous artist; and Lucy In The Sky With Flowers, the discovery of which in some garbage, prompted Scott Wilson to found the museum.

Moving into a different realm, Koons’ vaccuum cleaners in glass cases make our list because (1) Duchamp already did this with his urinal in 1917, and (2) well, see (1). Nevertheless, works from this series have wormed their way into the collections of both Tate and MoMA.

Today Otterness makes large-scale cartoonish figures for public art projects. However, he shot a dog for a performance work when he was in college. Not nice… So the question is: Should we judge an artist for everything he’s done, only a part of his work, or what he’s doing today (when still alive)? See Daniel Rolnik’s answer to these questions here.

Ok, so it’s unfair of us to single Stone out, and there is some merit in Lucky Lady, if you like 8-balls and gold paint. But we’re using it as an example of: just because it’s on Saatchi Online, does not mean it’s good. See also Jonathan Derry’s Espera Oscar de Corti, 2010, which “plays on notions of mythology, masculinity, time and decay” – though in truth on this site you’re spoiled for choice.

We’ve deliberately left the top ten spot free, because we agree, bad art is so subjective. For everyone who loved Richard Serra’s 1981 Tilted Arc, there was someone else campaigning for its removal. So what’s your favourite piece of bad art? Or is there a work that makes your critical blood boil. Let us know on Facebook and Twitter. 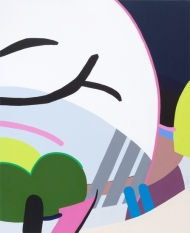 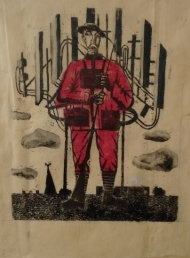 100 Years and Still on Guard by Elisabeth Bond